The kidnapping of Elizabeth Smart by homeless preacher Brian David Mitchell, who raped her and kept her captive for nine months before she was found by police and returned to her parents was a national media sensation. For those of us who lived in Utah at the time, it was a very personal case. My husband was one of many thousands of Mormon men who were asked to go looking for Elizabeth Smart in the canyon hills in our city. I talked to my children about the kidnapping and wept when Elizabeth was returned.

In the following years, I found myself feeling distinctly uncomfortable to the point of fearfulness around the homeless in Salt Lake City, whom the Smart family had tried to help by offering money and work around their home. This may have seemed like a stupid choice in retrospect, but it also seemed in line with Mormon teachings about giving to those who ask. Reading about and then meeting Lloyd Pendleton, Utah's homeless czar, has been a part of my reframing the question of what my obligation is as a Mormon and how to carry it out politically and personally.

Today, an interview with Lloyd Pendleton, director of Housing First, an initiative that has been implemented in the state of Utah (and other states) to give the chronically homeless citizens permanent housing with case management support to assist, then to deal with their other problems in their own time. 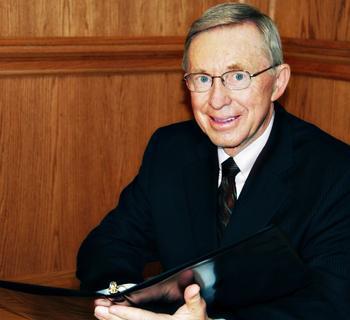 1. Do you feel that you have used any specific doctrines of the Mormon church in dealing with homelessness? The Book of Mormon says that we are to give to those who ask and not to judge, because we are all "beggars before God."

The Doctrine and Covenants also says that the idle do not deserve the bread of the laborer. What Housing First does is to make sure that taxpayer money goes to help those who truly need it, and that it goes to help the problem and properly intervene, especially with homeless who have mental health issues or drug problems.

2. How much money do you estimate the government saves by offering free housing to the homeless?

It's not free housing. They have to pay $50 a month or 30% of their income, whichever is greater. We believe in accountability. In Utah, there's a general assistance program they can use to pay for it even before they get a job. We help them get onto social security disability or other programs, because it's really tough to fill out the paperwork. Some also have veteran pensions or get social security incomes, but navigating the systems can be very challenging. Also, being on the street they don't have an address where income can be sent.

3. Has Salt Lake City really seen a dramatic drop in homeless people in the last ten years since you began Housing First? Do you think that people who visit Salt Lake City from other cities in the United States would be able to see the difference immediately in the downtown area?

No, actually, they probably wouldn't see a difference. We've been working on the chronically homeless and that's only 10% of the homeless population, particularly men and veterans (added in 2010). But we've had a significant increase in homeless families lately. One of the good results of dealing with our chronically homeless citizens is that we're able to convert bed to families now. Unfortunately, because of the recession, homelessness has gone back up as the middle class has felt an economic squeeze.

4. How did you originally get the idea for Housing First? Did you think it would work?

HUD was promoting Housing First which had been developed in NYC by Sam Tsemberis. I met Tsemberis in Las Vegas in May 2005 and he rode on the shuttle to the airport with me, talking to me about the program. Then he came out in June to talk to us in Salt Lake City and explain Housing First and how we could make it work. By August we had a pilot project going. I believed it would work, yes, but we needed to learn how to do it. The research showed it would work. It's being done all across the United States and in Canada and in some European countries.

5. What were the previous strategies for dealing with the homeless in Salt Lake City? Why do you think they didn't work?

The earlier model is called "Housing Ready" or "Treatment First," which meant you had to be clean, dry and sober before you got housing. Research indicates that can work for some and especially for those who do not have many barriers. But for many in those categories, they won't go into that kind of housing. Expecting the homeless to give up drinking when it's legal for anyone else to drink seems like a higher bar to them. What research finds is that when they get into housing and they're safe and stabilized, they're willing to look into treatment programs. Before that, life is too unsettling to go into treatment programs. It's not going to work.

6. What are some of the problems you worked through as you implemented the strategies of Housing First?

You need case management and we repurpose money from the state homeless trust fund to provide for the needed case management. That was a challenge for some agencies with the change in the vision of what we were doing. Some people were really unhappy with having their programs being defunded. You have to get the right people on the bus as you change your approach. Political leaders also change every election and we have to continually re-educate them. Homelessness is often not a priority or people think that they need to "pick themselves up by their bootstraps," which isn't an effective strategy.

7. What are the underlying causes of homeless as you have learned in the past years?

Traumatic brain injury, mental health issues, drug addiction, PTSD. There are homeless youth on the street that need to be reconnected with families and into school.

80% of homeless are temporary, 30-45% are families depending on the state. You rapidly rehouse them when they show up at the shelter because that's what they want. 50% of families stay a short time such as one or two weeks, and then are on their way. They need some references and are on their way. Some need financial assistance for 4-5 months and then help themselves.

Homeless veterans have different interventions because the Veteran Administration has separate money for them, veterans housing and supports.

8. How many of the homeless refuse housing? Why would they do this?

Some feel housing guilt and are lonely. Some invite people over and get abused or abuse the property. Some do not want to come into housing and would prefer to be on the street. They have claustrophobia. But almost all, over 90% want housing if you offer it to them.

9. There are people who declare themselves homeless, asking for donations, on many street corners in Salt Lake City and in other cities. What do you say to those who give donations to these people? Do you think they are truly in need or are they deceiving people?

They aren't usually homeless. KSL did a major study for a month and tracked some of them and basically, they are panhandlers and often put the money in the bank.

Truly homeless people panhandle periodically downtown and are looking for some food. I offer to bring them a sandwich or take them to dinner. We are trying to get people to stop giving as much money to panhandlers and actually make sure that the money gets to the homeless, not to the panhandlers. The panhandlers often take the money to buy drugs and have drug parties.

If you want to help someone who is homeless, don't just offer money. Offer your time and some real help. Offer to buy a sandwich and share a meal with them. That way, you get to see them as humans and really get to know what their lives are like. Giving money assuages our conscience as a quick fix, but doesn't recognize them as human beings and can actually make things worse for them.

If you are spiritually prompted to help a specific person, that's one thing. Otherwise, give money to Road Home or Rescue Mission or Salt Lake City Mission or Youth Futures for the homeless youth. As Mormons and Christians, we should give not just money, but of our resources, our time. Giving a dollar and walking away makes you feel better, but it isn't helping them. Engage with them, buy them a sandwich. Really have an interaction. Listen to their stories. Give them a handshake. That can be of much greater value than giving them a dollar.

10. There are reports that a large number of the homeless in Utah currently are LGBT Mormon youth who have been kicked out of their homes by parents who believe they are acting out the policies of the church, which discourages living openly as a gay person. What do you have to say to these parents? And what can we as Mormons do to help solve this problem?

I can understand why the parents do it. They have young children in the house they don't want to be influenced by alternate lifestyles or by teen drug use. But I ask them to wonder what Christ would do? We're supposedly Christians and followers of Christ. We take upon us Christ's name. Would he shun these children? Or would he do better?

Love and care for your children even if you don't agree with them. Do you think Christ is happy with all the choices we make? Does He still love us? We are here to learn and grow. If we say you have to do things the way we say, or we cut you off, is that what God would do to us? No matter what we do, God sends angels to watch over us and honors our choices.

Lloyd Pendleton was in management with Ford Motor Company for 14 years. He also worked for the Church of Jesus Christ of Latter-Day Saints for 26 years and was part of developing and implementing a worldwide humanitarian program. In 2006, he retired from Church employment and went to work for the state as the director of Utah's Homeless Task Force. He has worked there nine years, implementing the Homeless Plan statewide, a ten year plan to end homelessness.