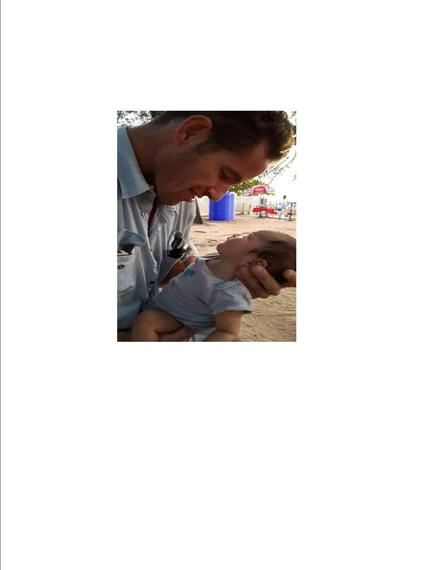 Josh's Story
I was wakened by the most awful news a mother could possibly hear. It was a long day the day before, and I was looking forward to sleeping in. "Honey, wake up I have some terrible, terrible news. Josh is dead. Oh my God Josh is dead." It took me seconds to wrap my brain around what my husband, Rick, was telling me. I threw myself out of bed screaming, "Nonononononooooo. This cannot be." My daughter, Mia, was on the other end of the phone that Rick was holding sobbing hysterically. "How?" I wailed, how could this be? I ran to the computer and turned to Facebook, where friends of his in Thailand had posted the terrible news that indeed Josh Ezell was killed in a motor bike accident in Phuket, Thailand on the morning of Feb. 28, 2014. He was run off the road by a tour bus and killed instantly. He was on the way to the market to buy diapers and milk for his baby son Christian, who was 4 months old.
In the hours that followed, Mia, Nat, her fiancé, and I booked a trip to Phuket, leaving as soon as was humanly possible. I wandered around the house heaving in grief; Rick unable to comfort me or offer any support other than gluing himself to my side. I was inconsolable. Phuket was a million miles away and all I had were the messages from his friends and followers in this country and in Southeast Asia where he had made a name for himself as one of the pioneers of bringing house music to clubs and resorts in Asia and beyond. I had no idea and yet I was comforted by the many words of shock and sympathy that his death had generated. At one point I found myself in the car with Rick and our dog. To this day I have no idea where we were going or why I was in the car, except that we passed a tattoo parlor and I yelled to Rick to stop! I was getting a tattoo of Josh on my arm. Now! Right now! It took forever for the guy to get me situated and for him to start. He asked me nothing as to why I was getting JOSHUA tattooed on my right arm in black script so I told him my son died that morning. "Oh, sorry to hear that", was all he said. It was a not particularly well done tattoo; the ink a little too black, the writing a little too thick, but it was there on my arm and gave me some comfort, just looking at I
The next 2 days were filled with passports, packing, Josh's birth certificate, all things we needed to arrange for his death and funeral arrangements. Most of this was done by Mia and Nat. And then it was time to leave. To come to the country Josh called home for 15 years, to meet the child he fathered and to bury my baby who was just 42 years old.
Joshua Christian Ezell was born Dec. 21 1971, in Ojai, California. His dad Norman Ezell and I had been married for almost 2 years and I had been unable to conceive. So Norman and I went to a fertility specialist in Santa Barbara who ran some tests. In the meantime Norman and I adopted a small black puppy we named Mofo. Mofo died of puppy distemper the day I learned I was pregnant with my son.
Josh was a colicky baby and cried a lot. His dad, who was a musician, would come home late from playing a gig, put the Joshua in the car and just drive the streets of Ojai, where we were living at the time, until the baby fell asleep. Christmas Day I passed him around the table to everybody to hold as if he were the mashed potatoes.
I adored this beautiful funny blond haired blue eyed little boy. In kindergarten he had to draw pictures of words beginning with B, so while most of the kids were drawing butterflies and bees, Joshua drew a butt, as perfect a round pink butt as a 5 year old could muster. He received an A from his teacher Mrs. Eldridge, who must have had a great sense of humor.
He was a wonderful older brother to his sister, Mia, who was born in Ojai in 1974, and he watched out for her as only a little big brother can. One day we were leaving the post office after picking up a gift from Josh's dad Norman, when a fire engine came screeching by, its siren blaring loudly. Joshua all of 4 years old clapped his hands over his sisters ears to shield her from the noise. She followed him around in all things he did until he turned about eight years old, when he informed her, she couldn't play with him and his friend's anymore-she had to make her own friends. She came home to me sobbing. Josh excelled in all that he did, except for sports, he hated anything sports like and when I told him he had to pick a sport, he chose soccer. I came to see him play one day when he was 9 or 10, and while all the other little boys were running back and forth after the ball, Josh was standing center field with his arms outstretched, making airplane noises and running in small circles. No more soccer. It wasn't until he was in high school that I had to read in a newspaper that Josh held the county record in the shot put! "Why didn't you tell me?" I cried. "I don't know", he said "it wasn't a big deal...." He was never big on tooting his horn. It wasn't until after his death that I found out in his field of music and deejaying he was a very big deal.