Tens of thousands of civil rights, labor, and other progressive activists gathered on the National Mall today for the One Nation Working Together rally, meant to bring attention to the fight for jobs, justice and education and energize the left one month before the midterm elections.

"October 2nd is about November 2nd," SEIU President Mary Kay Henry recently told MSNBC host Ed Schultz, who heavily promoted the event on his show and gave opening remarks today. "And it's about what we do after November 2nd to hold elected officials and corporate America accountable to getting us back to work."

More than 400 organizations representing tens of thousands of individuals sponsored the rally, bringing together groups like the Sierra Club, United Mine Workers of America, and the NAACP. Backers were touting it as the most diverse march in history.

Organizers insisted that One Nation was not a response to Fox News host Glenn Beck's Aug. 28 "Restoring Honor" rally, although some attendees held signs referencing the personality and his network, such as "I want my country back from Glenn Beck" and "Fox News: The more you watch, the less u know." "I didn't really appreciate that he took away from Martin Luther King," said Sheila Robinson, a member of AFSCME's District Council 37, noting that Beck's rally was on the steps of the Lincoln Memorial on the anniversary of the civil rights icon's "I Have a Dream" speech.

"His [Beck's] rally was in response to what the civil rights movement has always been about, which is a multiethnic movement," National Urban League President Marc Morial, who spoke at the rally, told The Huffington Post in an interview on Friday. "But I do invite people to consider the contrast they'll see, in terms of the diversity. This is named One Nation because this rally will look like the way the nation looks. It's going to be yellow, it's going to be black, white, Hispanic and Asian. It's going to be men and women. It's going to be people from various walks, areas and religions. That's what it's about, and that's what the future of America is about. So this is really also a demonstration that that is a future that we should be proud of, and that's a future we should embrace as a nation."

The National Mall looked like a patchwork quilt, with thousands of union workers grouped in clusters wearing t-shirts in their respective colors. Unions such as the AFL-CIO and SEIU bused in workers from all over the country, and many attendees at the event said that they learned about it from their local chapters and were hoping it would mobilize people to get out the vote for November. The Rev. Al Sharpton called the upcoming elections the country's "midterm exams" and said the left needed to get ready. "We've got to go home and got to hit the pavement," he urged attendees. "We've got to knock on doors... We've got to get ready for the midterm."

"I hope that people will go home, be energized to get their neighbors and their neighbors' neighbors out to vote so that we can out-vote those who don't know how to vote," said Lula Stewart, a member of the Office and Professional Employees International Union. "I will be calling, I will be visiting, going door to door, telling them how important this midterm vote is."

There didn't appear to be many conservatives at the rally; all the attendees with whom The Huffington Post spoke wanted to vote Republicans out of office in November, saying the GOP was more interested in defending corporations and the wealthy. There were some people waving signs and wearing clothing supporting President Obama, and most people gave him credit for trying but said he needed a Congress that was more willing to back him up -- both on the Republican and Democratic side.

Only one elected representative, Rep. Luis Gutierrez (D-Ill.), spoke today, although Rep. Charlie Rangel (D-N.Y.) was also in attenance. Rep. John Lewis (D-Ga.) was invited but was unable to participate. "On TV news, we don't see many pictures of the immigrant sweeping the floor in the hospital or caring for a sick child," said Gutierrez's prepared remarks. "But we see lots of pictures of scary invaders jumping over fences. Of prisoners in handcuffs. For too many people, the two words that come to mind when they think of immigrants are: Go Home. It's our job to replace them with two words that tell the real story: Hard Work."

Most attendees seemed to have received the message about focusing on jobs, justice and education, although there were a smattering of off-topic signs about war, not eating meat, and child abduction.

"I'm hoping this helps to be a counter-balance to all of the press that says there's this right-wing wave that everybody is more concerned about taxes than they are about justice," George Sheridan, a first- and second-grade teacher from California and member of the National Education Association told The Huffington Post. "We want to show that in fact, what we need is good jobs; that's where we'll get taxes from. What we need is social investment. If we educate the children, then we don't have as many people in welfare, we don't have as many people in prison. So we're looking for a just society. This is one step. That doesn't come from today, but this is one piece of a movement we have to build for years."

Tens Of Thousands Of Progressives Rally At The Lincoln Memorial For Jobs, Justice And Education 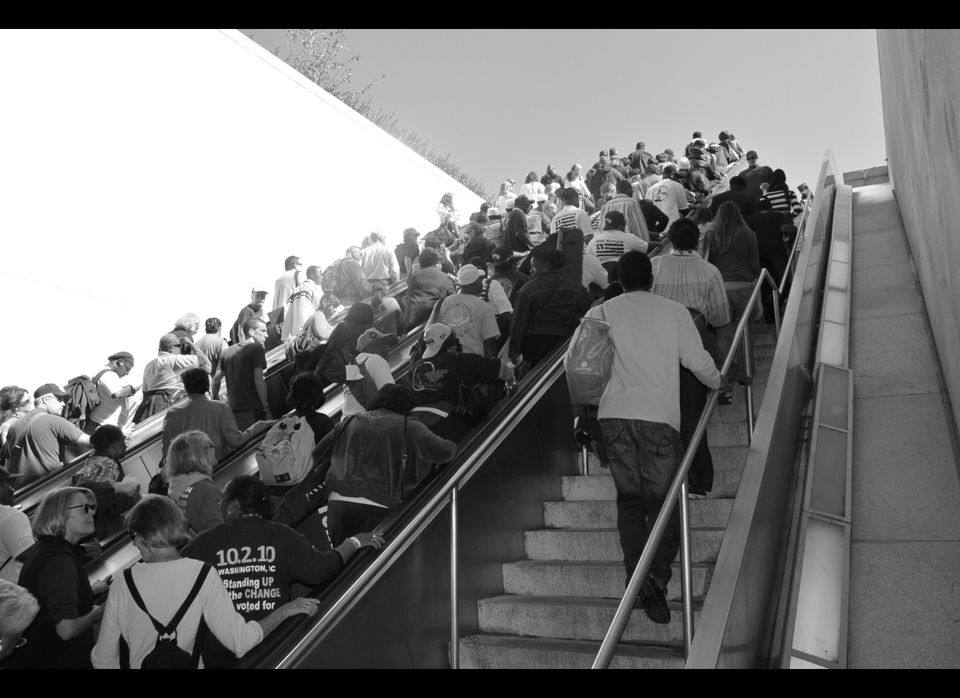