If I ask you to think of the world's worst killers, what comes to mind? Charles Manson (Kill Count: 9 people)? Osama bin Laden (Ordered terrorist attacks killing 3,500 people)? Papa Doc (Tyrant who ordered the murders of 60 thousand people)? Well, what about Malaria?

Monday, April 25th is World Malaria Day. Just last year, there were over 200 million cases of malaria, killing over 400,000 people, around 300,000 of whom were under 5 years old. One simple solution is long-lasting insecticidal bednets. Bednets cost $2.50. Each net protects two people from the bite of malaria-carrying mosquitoes.

Here are five reasons why you should participate in the Just One Net campaign, and buy a net for World Malaria Day: 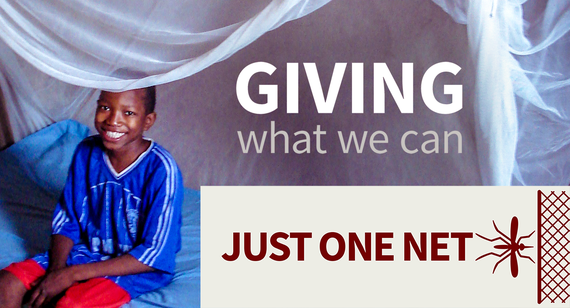 The cost to purchase a single bednet is $2.50, roughly the same price as a cup of coffee or the difference between a 6-inch sandwich and a footlong. What a steal!

Of course, price alone should not be the only reason to buy something-- malarial bednets are also very effective. Long-lasting insecticidal bednets lasts 3-4 years and can not only prevent mosquitoes from biting people under the nets, but also kills off mosquitoes that try, protecting other people nearby.

Giving What We Can is an independent charity evaluator that tries to find the most effective charities in the world. And they rank the Against Malaria Foundation (which purchases bednets and collaborates with distribution partners) as among their Top Charities.

Why? Well, partially because the Against Malaria Foundation is an exceptionally lean organization -- the founders are obsessed with effectiveness, and their website is filled with concrete data on the good that they do. But mostly because bednets are just really, really, effective.

Malaria's symptoms typically include shaking chills, high fever, profuse sweating, headache, nausea, vomiting, diarrhea, anemia, muscle pain, convulsions, coma and bloody stools, and typically lasts about a week. In the most at-risk regions--which the AMF tries to target--often people average getting malaria more than once a year. Since long-lasting insecticidal bednets cover two people and lasts 3-4 years, each $2.50 bednet can reasonably be expected to prevent at least 6 cases of malaria-- 6 weeks of suffering in agony.

Further, while each individual incidence of malaria is unlikely to be fatal, the threat of death is always present, and because of how frequent malaria is (The WHO estimates 200 million+ incidences a year, and over 3 billion people at risk), not having enough malaria nets means that hundreds of millions of people are sleeping in fear.

3. You can be part of something amazing.

When hearing statistics about the sheer scope of human suffering, it's easy to feel paralyzed--there is so much work left to do and it might feel like a single bednet is insignificant when hundreds of millions of people have malaria. But what if you were buying that bednet for someone you knew?

More than that, malaria nets collectively have already prevented over 450 million cases of malaria:

As Adam Ewing says in the novel Cloud Atlas when deciding to join the abolitionist cause,

My actions might amount to nothing more than a drop in a seemingly limitless ocean. Yet what is any ocean but a multitude of drops?

You, too, can be part of this multitude. You, too, can stop being a bystander and join us in ending this ongoing catastrophe.

A lot of people believe that donations should be quiet and discreet--you aren't really being altruistic if you tell people about it. This is especially true in western culture: "But when you give to the poor, do not let your left hand know what your right hand is doing, so that your giving will be in secret" (Matthew 6:4).

But raising awareness can make a huge difference. While it's important to not be overly boastful and arrogant about your good deeds, it's even more important that good deeds are done in the first place. Numerous studies have shown that we're strongly influenced by what our peers publicly do, and thus it will be great to publicly give, and encourage a culture of effective giving. The more of us publicly give, the more we can avert the bystander effect and end malaria for good. So go ahead, buy a net, and share it on Facebook! Tweet with the hashtags #endmalaria or #JustOneNet! Or share this article online, so your friends can do the same. :)

Let's crunch the numbers. I estimate that roughly 1,000 people will read this article. If each of you will buy a single bednet, and persuade three of your friends to do the same, we'll be able to raise enough money for the Against Malaria Foundation to buy 4000 bednets.

5. Giving will probably make you happier.

Perhaps you're not motivated to give for altruistic reasons. Perhaps the one thing you care about the most is your own happiness/well-being. Well, by a lucky coincidence of how minds work, you're covered here too! According to a 2009 study, spending money on others can actually improve your own happiness. Donating often makes people far happier than continuously engaging in the hedonistic treadmill of consumer purchases, and what better gift can you provide than a lifesaving bednet?

I don't know whether I'm obligated to donate money like this, and I don't care. I just think it's awesome to be the defender of 17 villages against an inhuman blood-drinking child-killing evil.

Anecdotally, I have personally experienced this as well. Every time I donate another dollar to the Against Malaria Foundation, I think about the family whose lives are a little bit more secure and how I have helped--ever so slightly--make the world a better place. I get a sense of not just satisfaction, but of fulfillment and moral excitement.

But don't take my word for it--check it out for yourself! Buy just one net, and see how it makes you feel!

So what do you think? Do you find all, some,or none of these points convincing? Have you bought a bednet for charity? Did you share/tweet this article? Why or why not? Tell us in the comments!