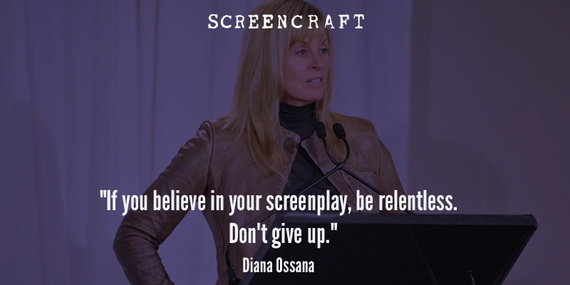 We’re thrilled to have had the chance to speak with the Academy Award-winning screenwriter of Brokeback Mountain, Diana Ossana.

Ossana, of Italian/Irish descent, was born and raised in St. Louis, Missouri. She attended Eastern New Mexico University in Portales, majoring in English/Political Science, and is the author of several short stories and numerous essays.

In 1992, at Larry McMurtry's request, she left a career in law to begin a writing collaboration with Larry, which continues to this day. Their collective works includes two novels, Pretty Boyd Floyd and Zeke and Ned, as well as over forty feature film scripts. They were writers and executive producers on four award-winning miniseries: Streets of Laredo and Comanche Moon for CBS; Dead Man's Walk for ABC; and Johnson County War for Hallmark Entertainment.

Diana and Larry received the Best Adapted Screenplay Academy Award for Brokeback Mountain (which they adapted from a short story by Annie Proulx). The film was directed by Ang Lee. In addition to co-writing Brokeback Mountain, Ossana was also the producer on the film, joining cast and crew during filming on location in and around Calgary, Alberta.

She has served on numerous film committees and juries, including Film Independent and the American Film Institute's annual selection of the Ten Best Films of the Year in 2006, 2007, and 2011. She also taught screenwriting and writing historical fiction at the University of Iowa and has served as a guest lecturer at Harvard University.

Ossana and McMurtry are developing three one-hour TV pilot scripts for series; developing a feature script with director Cary Fukunaga; and Diana has recently adapted the book Hope's Wish into a feature screenplay.

Dianne is also a mentor for the third annual ScreenCraft Screenwriting Fellowship.

ScreenCraft: When did your storytelling roots begin?

Diana Ossana: I supposed my storytelling roots, such as they are, began with reading. I have been a voracious reader since childhood. I started reading the newspaper when I was seven years old (with a dictionary by my side). I was -- and still am -- a completist. I would start a shelf at the public library and simply check out eleven books (the most allowed) and return in two weeks and check out the next eleven, until I was finished with a subject or genre.

ScreenCraft: What brought you to screenwriting?

Diana Ossana: Larry McMurtry had been recuperating at my home for more than two years after his quadruple bypass surgery in late 1991. He had stopped reading, stopped writing, and batted away every screenwriting job offered to him. It was overwhelmingly sad to watch this talented man wither away. An offer came to him from Warner Brothers to write a screenplay about Pretty Boy Floyd, the Depression-era outlaw, and I saw this as an opportunity to jump-start him back into writing. For several days, I researched Pretty Boy and came up with 20 pages of interesting notions about him. I sat Larry down and told him I was going to read him all the reasons why he should write the screenplay. When I finished, he told me he would write the screenplay only if I wrote it with him. We went to Hollywood, spoke to the executive at Warner Brothers, and we proceeded to write our first script together.

ScreenCraft: What are the major differences between writing a novel and writing a screenplay?

Diana Ossana: Novels can be art; screenplays are mainly craft -- structure being a major component of an effective script. Novels are also solitary; screenplays are often written by two (and sometimes more, unfortunately) writers. Writing novels is fairly inexpensive -- all one needs is a typewriter and paper (as in Larry’s case), or a laptop with a screenwriting program. And it takes a lot of people and money to turn a screenplay into a film.

ScreenCraft: How did you become attached to Brokeback Mountain and what was that experience like?

Diana Ossana: In the fall of 1997, while living in Larry McMurtry's prairie-style home in Archer City, Texas, in the middle of a long, sleepless night, I picked up the October 13 issue of The New Yorker and began reading Annie Proulx's Brokeback Mountain. I sensed immediately that this was a great story with the power to touch many people. I felt it ought to be out in the world in some major, major way, and knew then that I wanted to adapt Brokeback Mountain into a screenplay. The next morning, I hurried downstairs, found Larry, and asked, then demanded, that he read the story (he doesn’t read short fiction because he can’t write it). When he finished, I asked him if he thought we could adapt it into a screenplay. He considered for a moment, and agreed we could. We sat down, wrote Annie Proulx a single-page letter and put it in the mail. Annie replied to our letter in less than a week. We optioned her story with our own money and promptly set about writing Brokeback Mountain: A Screenplay, Based on a Short Story by Annie Proulx. And I stayed with that screenplay for the next seven years, all the way through filming and to the final cut of the film.

ScreenCraft: What's your process as far as writing scripts with Larry?

Diana Ossana: At the beginning of our partnership, Larry would sit down in the morning, type five pages -- and only five pages -- on his manual typewriter. He would hand them to me, I would enter them into my computer, editing, adding, subtracting as I typed, and then I would move forward with the story. I would print out his edited and my added pages, hand them to Larry, and he would start again the following morning. And we would do this every day until we had a first draft. Larry usually checks out after one draft, and I continue, making changes, edits, etc. We would have discussions, arguments, random thoughts with one another. He reads each draft and gives notes and suggestions. Nowadays, it’s a bit different; I’ll simply start the screenplay, and then give Larry my first twenty or thirty pages. We’ll discuss, change, make additions, he’ll write scenes, and then we continue on. It will vary according to the project.

ScreenCraft: What was the Oscar experience like as a screenwriter and winner?

Diana Ossana: The Oscar experience was surprising, exhilarating, and exhausting. The awards season began before the end of 2005. We did Q & A’s, appeared on panels, and did interviews. We attended awards events and yet, we had to continue to write -- we were adapting Larry’s long novel Comanche Moon into a miniseries. We were pleased to win the Oscar for Best Adapted Screenplay, of course, but the awards experience itself was stressful. It’s also difficult to know there are films equal to yours in quality that are not winning.

Winning awards was gratifying, but we never thought about that while writing the script or making the film. We simply wanted the best script and the best film we could create.

ScreenCraft: What films have influenced you the most in your career as a screenwriter producer?

Diana Ossana: There are too many films to list, but I’ll give it a try: I watched many films as a youngster, including all of Preston Sturges (Sullivan’s Travels, Hail the Conquering Hero); Billy Wilder (Some Like It Hot, The Apartment, Lost Weekend, Seven-Year Itch); westerns like My Darling Clementine, Oxbow Incident, The Searchers; Fellini, especially La Strada; Hitchcock, and on and on. I worked in a movie theater as a teenager and saw all the James Bond films over and over, memorized the dialogue of most of the films that went through our theater.

ScreenCraft: In your time as a screenwriter and producer, what are the biggest lessons you've learned along the way?

Diana Ossana: I’ve learned that the most important thing to know before sitting down to write is the nature of each of your characters -- know them inside and out, through and through, as if they’re real. Know them better than you know yourself.

I’ve learned that compromise is a double-edged sword: it’s both inevitable and something to be careful about when making changes to one’s script, particularly with regard to a character’s behavior. It’s important to stay true to a character’s nature, to not have him or her doing something they wouldn’t do based upon your knowledge of who they are.

I’ve also learned that if you believe in your screenplay, be relentless. Don’t give up.

ScreenCraft: What advice do you have for novice screenwriters looking to make their screenwriting dreams come true?

Diana Ossana: Watch as many movies as you can, in every genre, both good and not so good. It’s just as difficult to make a bad film as it is to make a good film. Then sit down and write your screenplay. Write every day. Don’t procrastinate and don’t rewrite as you go (unless it’s the beginning pages, since you want to have the best beginning possible). Momentum is key.

ScreenCraft: What upcoming projects are you currently working on?

Diana Ossana: We’ve finished two pilot scripts for cable television, and we’re currently working on a first draft of a screenplay based upon a true story brought to us by a young and extremely talented director by the name of Cary Fukunaga. It’s the tragic story of Jadin Bell and his father Joe Bell.

Diana Ossana: There’s a novel called A Soldier Of The Great War by Mark Helprin, which I would love to adapt into a feature film or else a limited series.

ScreenCraft: What are you looking for in the screenplays for the ScreenCraft Screenwriting Fellowship?

Diana Ossana: I respond most to stories that resonate with me emotionally, in any direction. I’ll be looking for screenplays that move me, that are structurally sound, and that have compelling characters.

The deadline for the ScreenCraft Screenwriting Fellowship is December 30th, 2015.

The chosen recipients will receive ongoing professional support and a special trip to Los Angeles for meetings and introductions to key entertainment executives, producers and representatives. Apply now and join a growing community of visionary screenwriters with meaningful connections to Hollywood mentors.