In Paris, sixty years ago today, the U.N. General Assembly passed the Universal Declaration of Human Rights. Access to food is the right of "everyone," says its Article 25. Yet, a new World Public Opinion poll reports that one in four Americans still rejects its premise -- that it is government's responsibility to protect citizens' right to eat.

The extent of America's depend-on-yourself-or-die stance may be unique: In eighteen of the twenty-one nations surveyed, at most one in ten respondents shares this view.

Cliches abound as to why the U.S. stands alone. The positive spin chalks it up to the "rugged individualism" of our "frontier spirit." I'm not so sure. Consider the less romantic, more recent power of the steady drip, drip, drip of market ideology from the Reagan era onward, telling us to shrink government's responsibilities.

But then, in 2008, the drip suddenly stopped and that ideology seemed to be spiraling down the drain. When the depth of our financial crisis began sinking in, even a dazed Alan Greenspan acknowledged that his self-regulating market may require public action. As the crisis spreads hunger at unprecedented speed, an estimated one in ten Americans now depends on food stamps, and the number of hungry people world wide jumped by 40 million just this year, the U.N. said this week. So nearly a billion people face hunger today -- roughly twice as many as the early 70s when hunger first hit the international marquee. And in a time when there is no shortage of food, period.

If citizens' having real choice is the heart of democracy -- and no human being chooses to go hungry -- we might ponder: Isn't hunger's very existence proof of a deficit of democracy? If so, this anniversary day might be a perfect moment to rethink what it could mean to shift the frame to food as a human right.

Consider what difference it made in Brazil's fourth largest city, Belo Horizonte, when a new administration was elected there in 1993 on a food-as-a-right platform.

Within a decade Belo Horizonte had cut its infant death rate -- the best measure of hunger -- in half. And the cost? Less than 2 percent of the city budget, or roughly one penny a city-resident per day.

Like the citizens of Belo, Americans can come to see that access to food as a right does not necessarily mean more public handouts. It can mean redefining the "free" in "free market" as the freedom of all to participate in it and the freedom of new businesses to enter, unblocked by global oligopolies now dominating every major sector. It might mean, as in Belo, citizen-government partnerships driven by values of inclusion and mutual respect.

To move toward that possibility, we Americans can seize this historic shift in presidential philosophy to recommit to democracy by removing the power of private wealth over public decision making -- consider the $16 million a day spent last year lobbying Congress -- and opening new avenues for the voices of millions of citizens to be heard. Only then will new rules emerging from today's economic ruins get shaped in the interests of all, including our interest in eating.

In imagining food as a right of citizenship, please note: No change in human nature is required! Through most of human evolution -- except for the last few thousand of roughly 200,000 years -- Homo sapiens lived in societies where pervasive sharing of food was the norm. As food sharers, "especially among unrelated individuals," humans are unique, writes authority on hunter-gatherer food transfers, Michael Gurven. Except in times of extreme privation, when some eat, all eat. 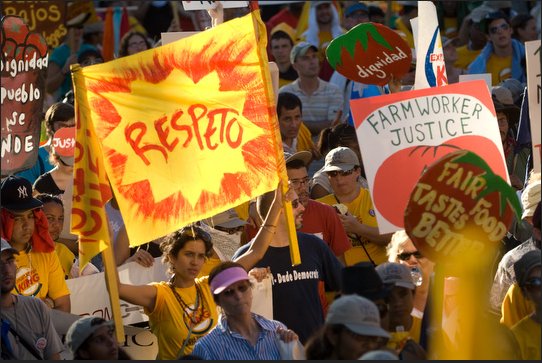 In that spirit, I'm happy to report a victory last week for those who harvest our food but often go without themselves: The Coalition of Immokalee Workers -- farmworkers in Florida -- reached an agreement with Subway, the third largest fast-food chain in the world and the biggest fast-food buyer of Florida tomatoes. Subway agreed to help improve wages and working conditions. When these farmworkers began organizing in the 90s, their wages had not increased in twenty years. (I'll be saluting their victory at our Small Planet Fund Gala Wednesday night in NYC, where the Immokalee Worker's Lucas Benitez will be our guest of honor. To join us, visit the site.)

In 1948 Eleanor Roosevelt led the charge for universal recognition of essential human rights. Let us now, finally, catch up with our ancestors, both recent and ancient.

Frances Moore Lappe, of the Cambridge-based Small Planet Institute, is the author or co-author of sixteen books, including World Hunger: Twelve Myths and Getting a Grip: Clarity, Creativity, and Courage in a World Gone Mad.

CDC, WHO, Uganda To Host Regional Meeting As Ebola Spreads