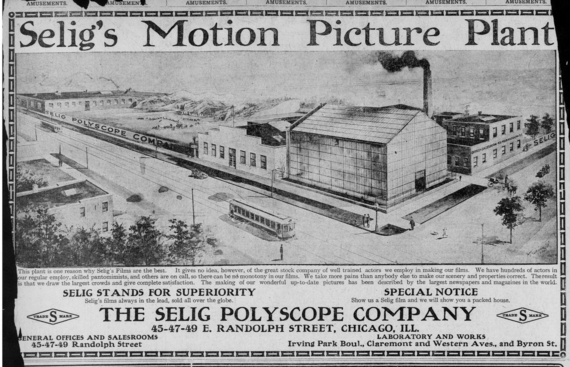 Michelle Robey, 55, probably had no idea that the corner here in my neighborhood, where she was shot dead Friday night was once the home of a 200 acre movie studio where L. Frank Baum personally helped make the very first version of The Wizard of Oz.

Today the intersection in the North Center neighborhood of Chicago hosts a CVS, two gas stations and a bus stop.

But back in 1896, former magician William Selig, newly arrived from the east coast where there had been some legal trouble with Thomas Edison concerning ownership of the newly emerging movie making machines, began building his studio.

Chicago being a place where lots of people go when things weren't working out somewhere else. Like, for example, Ms. Robey.

When Ms Robey brought out the knife in our local CVS and started shouting Friday night, she had $5.00 in her pocket. About $11.00 in her checking account and was living on social security. She'd filed for bankruptcy. She was disabled. Unemployed. And God only knows what kind of voices she was hearing in her head as she ran out of the CVS and across the busy intersection to the bus stop.

Chicago Police were called. Ms. Robey, according to witnesses, lunged at one officer with the knife. The officers tried the Tasers first, but they didn't work.

That happens sometimes, as I understand it, when a person is heavily dressed.

But she wouldn't stop. Wouldn't put down the knife. Wouldn't stop lunging. So the officers brought out their guns and fired. She was later pronounced dead at a local hospital.

And you'd think that would be the end of the story. Till you hear that she had a 15 year old son. A boy whose Mom is now gone. A boy who won't be caring about the movie history at that corner because that's where his Mom was shot and killed.

So I guess you could make all the political arguments you want. Recognize that by the time we need to turn to the cops to clean up what all of us couldn't help, by the time that happens, then the battle for taking care of each other, especially the most vulnerable, has been lost.

Or you can decide that the "other guy" is not your problem. Or maybe blame the "other" for the whole sorry mess. Toss out a simplistic answer like "build a wall!" Or a patronizing speech about "helping people."

I know the answer is not to split the difference between "left" and "right" and call it a day. Other than that? I have no clue as to how we as in the greater human family can look out for that 15-year-old kid. Or how we'll all be hurting if we do not look out for him.

But I imagine he'll never be real impressed with the Wizard of Oz.