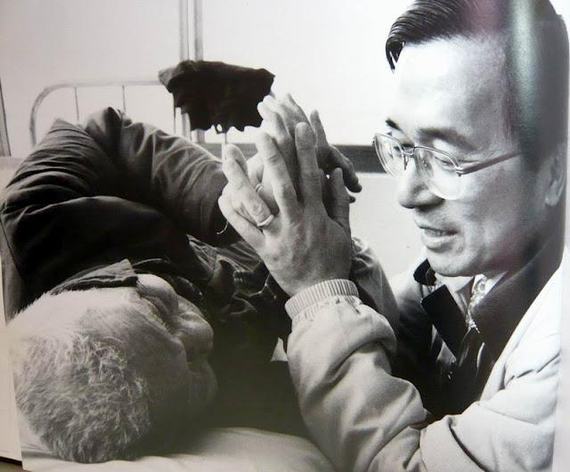 Because of some strong rescuing effort inside and outside of Taiwan, Mr. Chen Shui-Bian, former President of Taiwan, is finally home to recover from a spectacular failure in the justice system of Taiwan after surviving six years of harsh and demeaning imprisonment. If Mr. Chen were an American, his lawyers would be preparing a lawsuit for unjust imprisonment and unfair and damaging treatment while in prison. However, because Mr. Chen is a Taiwanese under a Chinese Nationalist Government, he has to lay low, shunning all political involvements and media exposures, so that he won't risk being sent back to the prison.

I was first made aware of Chen's case in late 2011 but I did not want to have anything to do with it. Just like most people, I thought that he was just another corrupted politician, a common impression from typical news media reports. After I realized that this was indeed a serious human rights violation, I joined the rescuing effort and wrote the first article on April 24, 2012.

Since then, it has been a long, struggling, but rewarding human rights journey. Rewarding because we now know that with just a few human rights activists, doctors and scholars, joining effort without knowing each other personally, we can make a difference against a powerful and abusive regime. Looking back, I have written over twenty articles on Huffington Post to call for his release and our Human Right Action Center has carried out three missions to Taiwan to support him. Our first article received little attention but our latest articles received thousands of "like" from readers.

Even though Mr. Chen is now at home, we need to tell the story with a perspective to examine how and why such staggering violation of human rights could happen to a prominent figure to a point that he almost died in prison if not for this joint rescuing effort.

The historical backdrop is important to this story. Mr. Chen was from the home grown people of Taiwan, born to an impoverished peasant family, not of those Chinese "elites" escaping with Chiang Kai-Shek to Taiwan. Chiang had lost the battle for China and moved his losing army to Taiwan, with a posture that he would go back to fight the Mao forces. This never happened, of course, except in a few lost souls in the foreign policy establishment who dreamed of this possibility. American interest in Taiwan quickly disappeared. Chiang's army, called the KMT troop, took over Taiwan and killed at least 20,000 native born people in the 228 Massacre in 1947. The world paid little attention, including the USA, who is still responsible in some sense for this small island of twenty-three million people. KMT had imposed martial low until 1987 for over 38 years (a world record) and was of the usual brutal, oppressive kind run by the totalitarian KMT government.

The KMT was stunned into democracy due to many brave opposition movements in the 80s. In 1996, Taiwanese, first time ever, finally had the right to elect a president. In 2000, Mr. Chen from the "wrong" side of the tracks won the presidential election and he was re-elected in 2008. In other words, he beat KMT not just once but twice. Things got better for all of the Taiwanese despite the malicious boycott by KMT who still controlled the congress in Taiwan. As soon as his second term was over, the newly elected KMT government under Mr. Ma stuck Mr. Chen into jail for corruption. He was put in a small cell, under 24-hour unrelenting light and fast and high-speed medical run through if he was allowed one. In this country, his imprisonment was of the nature given to killers and maniacs for disciplines and only for a short period. However, Mr. Chen was placed under such harsh and inhuman condition over 23 hours a day for nearly four years. He was allowed only 30 minutes a day to leave the cell for an outdoor stretch. He wasn't even allowed to go outside if it rained or it was a holiday for the prison staff. Even if Chen's crimes were real, those crimes were not violent. The trial was immediately deemed at best to be controversial by human rights groups. After four years, Mr. Chen literally and medically fell apart inside that prison.

Most people in Taiwan, including his own party, sadly forgot him, believing that he was guilty and thus embarrassed his own party and people into silence and neglect.

A few of us, Taiwanese and Americans, went to work on changing this situation. Without coordinating, some were able to get a few high profile figures to visit him in prison, some staged smallish but persistent demonstrations outside of the prison, some focused on getting him the medical attention he needed, and some wrote blogs and open letters. Gradually, these devoted supporters got the attention of the world to apply pressure to KMT and the prison system. Mr. Chen was moved to a better situation in the prison, on his own and in a room where visitors could visit. But the doctors from a volunteering medical team saw the decline of the man and asked for his release. The HRAC sent two folks from the human rights movement to see him and they were amazed on how badly he looked. Their judgment was: send him home to recoup or die; they stated this fact to the officials of Taiwan's Justice Department in their face-to-face meeting.

In November 2014, KMT lost a key election of five major city and county mayors by a landslide. Mr. Ma, once a political darling, is now so unpopular due to his pro-China policies and widespread corruptions to put Taiwan in a dire economical and political situation. The opposition simply ran on a platform equating casting vote for any KMT candidate as supporting Ma himself. Of those newly elected mayors, the Mayor of the Capital, Taipei, is the chair of a volunteer medical team for Mr. Chen, whose members had worked extremely hard just to get Mr. Chen some basic medical care he desperately needed. As a result, after the election, the call for Mr. Chen's release was intensified.

The Ma government under pressure from human rights groups as well as a growing consciousness that the trial of Mr. Chen was unfair and his treatment dreadful.
In January 2015, Mr. Chen was finally sent home to recover with a twist: he would go back to prison when he becomes well, unusual but true. Unless he is no longer under this threat, our rescuing effort is not done.

Now the country has awakened to the fact of an unfair trial and dreadful treatment of Mr. Chen. He needs to stay home and enjoy his life as best he can. That consensus is growing, especially among the young voters of Taiwan. They now know that there is a case that Mr. Chen has been a classical Prisoner of Consciousness (POC). He may in fact be innocent. He might have been a prisoner of political vendetta by the Ma government.

It is time for Taiwan to set this record straight by a serious and unbiased judicial system by reviewing his case. HRAC has put together a short, powerful video to highlight this story. Mr. Chen deserves that. Taiwan deserves that, especially those Taiwanese and Americans who wrote this man off and left him to die in prison. The young people of Taiwan need to study this case of Mr. Chen. He may be the symbol they need for the future.