What is this world made of? The hate. The abuse. The death. But... this world also has hope. Hope in the little things you wouldn't expect. A small donation for the hungry. A child saving a frog. Someone holding a door open. A small hello. And... a girl and her brother saving a seagull with a broken wing from the side of the road.

His name was Patrick. It was St. Patrick's Day when we found him, hence the name. We found him huddled by an exit on a highway on a small patch of grass, trying to protect his drooping wing. As we scrambled towards him, I was as nervous as he probably was. I walked up to him and he desperately tried to fly. The attempt was futile and he ended up rolling over on his back with his tiny yellow feet flailing and kicking the air. My brother tossed me a bedsheet and I gently wrapped it around his body. Patrick was surprisingly light and didn't squirm much. My mother had an empty duffle bag in which I placed Patrick. Gingerly we carried the gull to the car where he rested in my lap. A few moments later, we were in the car driving to Sweetbriar Animal Rescue. Patrick was in a dog crate in the trunk of my mother's grey car. The drive was edgy because we knew every turn and every bump hurt our gull immensely. When we arrived, we carried Patrick in and Isabel, a worker there examined his ruptured wing. When she was finished, she gave me a sad look. "Well.... the bone is visible... compound fracture... I wish I could've given you better news, but we will do what we can." I couldn't believe it. My Patrick may not make it.

Isabel then proceeded to give us a tour of the facility. The tour was lovely and we saw many rescued animals from hedgehogs to crows. Copper, a blind fox with a deformed paw, really reached my soul. However, my heart was hollow at the thought of Patrick. The tour ended and I asked for one last look at Patrick. I regret it still. I saw my gull, my survivor, looking at me intently with the wisdom only animals have. He shifted and stretched his strong body. Patrick seemed to nod at me as I walked away, out the door, and into the car.

The next day was all anticipation. Period after period, class after class. All the doodles in my notebook portrayed my winged survivor. I prayed under my breath for him to be ok. Finally, I arrived home. My father, awaiting me, had a grim look on his face. My mother texted him what they had to do.

That night, while getting undressed, a feather floated out of my shirt and onto the floor.

Sometimes we are left to wonder why this world has so much pain and hurt. Why do we lose the ones we love, the ones we try so hard to save? Life is so fragile, with ups and downs just like a bird in flight. We need to protect that bird in all of us. On Earth Day, my goal is to follow the words of Mahatma Gandhi, to be the change I want to see in the world. The little things we do, the small hello, the holding the door open... they can be all the hope in one's life. If there is still one light of hope, the darkness isn't quite so dark. 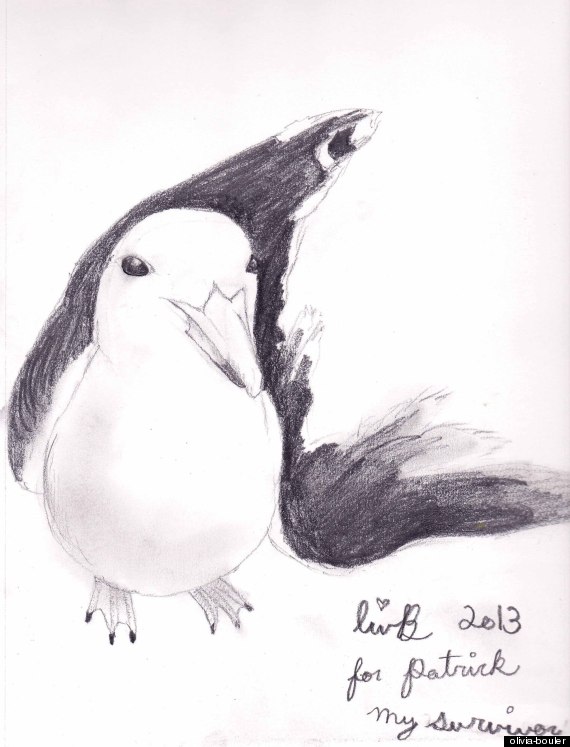