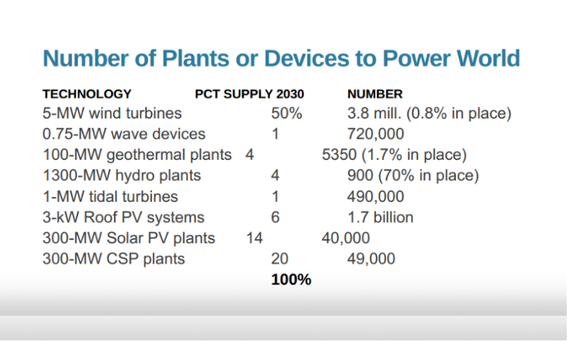 Crimea, once part of Ukraine, is now part of Russia (at least according to Putin). Yet so far, this dramatic move is being met with relatively weak responses from the United States and Europe.

Part of the reason for that is that Russia is one of the biggest suppliers of natural gas. It heats much of Ukraine and Europe and client nations have to keep that reality in mind. The crisis in Crimea reminds us yet again of a dirty fact: our need for fossil fuels dramatically alters the world's balance of power.

Alternative energy could change that. It could democratize power production and reduce conflicts in a major way by taking away a huge bargaining chip from countries like Russia (and Iran), one that has plagued us for years: fossil fuels.

In 2009, when Stanford professor Mark Jacobson said it would be possible to run the world solely on wind, water and solar energy by 2030, the oil industry laughed. When, in response, he calculated (see above) just how many hydroelectric dams, wind turbines, wave-energy systems, solar power plants and photovoltaic installations the world would need in order to completely free itself from its unhealthy addiction to fossil fuels, the industry stopped laughing.

Although Jacobson was mostly interested in the environmental effects of his research, we should not overlook the political effects. Reducing our reliance on fossil fuels could do far more than help the environment. Crimea is just the latest example.

Oil and natural gas reserves have this way of becoming a sort of curse. From Russia to Saudi Arabia to Venezuela, it has long been noted that oil-rich states tend to be significantly more authoritarian than their oil-poor counterparts. The idea is that these states fail to develop fair political institutions because when revenue is collected through oil rents rather than taxes, citizens have fewer reasons to expect the existing regime to be responsive. Instead, state governments "bribe" the citizenry with luxurious social welfare programs. As Harvard Law professor Noah Feldman writes, there is "no fiscal connection between the government and the people. The government has only to keep its people in line so that they do not overthrow it and start collecting the oil rents themselves." 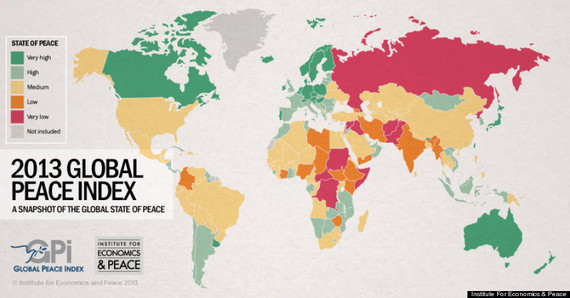 A transition to renewable energy -- even if this shift is spearheaded only by developed nations -- could reduce the appalling number of ongoing civil and regional wars and transform governments around the world. It could do so in many ways, but most notably: It could deprive rag-tag militants of a main source of income; it could reduce the capability of states that rent out their natural resources, in Sub-Saharan Africa and elsewhere, to fund armed conflicts; and, it could keep money out of the hands of political and military leaders who are ill-prepared to receive it.

As with other topics in political and social science, it is difficult to prove a causal, one-to-one correlation between oil and conflict. Yet the data is compelling. "Petrostates were involved in 22% of all [militarized interstate disputes] since 1970, even though they are just 31 states and a small fraction of the world's population," according to American University Professor Jeff Colgan.

While none of the above mechanisms are proven, surefire ways in which fossil fuels spark conflict, there is enough evidence for us to take action. Combined with the environmental benefits, a new proliferation of conflict provides an incredibly strong incentive to heed Jacobson's words and to make the shift to renewable energy: to integrate turbines, solar panels, wave power, biofuels, geothermal power and more into the infrastructure of every country around the world and to spark a jobs boom in the process. It would turn the world right-side up.

So what are we waiting for? Let's reduce our excessive reliance on oil -- and let's start now.

Note: A different version of this post was originally published on mic.com.