As I think about the true origins of this One Through Love project, I am carried all the way back to my early 20s. I remember as a 24-year-old spiritual seeker, wandering through the ashrams, temples, burning ghats and holy shrines of South Asia in the mid 1970s. I had the sheer grace to stumble upon a modern day Sufi saint, a man named Bawa Muhaiyaddeen. It was through a series of seemingly random "circumstances" (all Sufis smile at words like "random circumstances") that I found myself arriving with an English friend at midnight, tired, sweaty and hungry, just off a 3rd class local train, into the remote already darkened Sri Lankan city of Jaffna.

I remember I was holding a $11 plane ticket, for a flight leaving at 6:00 a.m. the next morning, a short hop across the Laccadive Sea to the South Indian city of Tiruchirappalli. In my backpack, I was carrying ("smuggling" I suppose would be the more precise word) about twenty pounds of fresh, Sri Lankan cloves, shrink wrapped in plastic. These cloves were, it was rumored, worth almost 10 times what they cost in Sri Lanka in northern India cities like Calcutta or Patna. I must say here that I was driven to such adventures by the simple fact that I had about $300 left in my pocket and was a long, long way from home in San Francisco.

Somewhere around 1:00 a.m., as my English friend and I were looking for that last possible open rickshaw driver's restaurant, we were directed by a local man towards a ramshackle wooden building with upstairs lights still burning brightly. After some initial hesitation, we decided to follow this man's advice and walked up to the building and knocked on the door. As the wooden door creaked open, an American man appeared and with a simple "Oh hi there," turned immediately and ushered us upstairs into and through a crowded room. Over a hundred people (mostly Tamils and Sinhalese with a few Euro-Americans) were somehow wide awake, sitting up straight and listening to a man I would come to know and love -- Bawa Muhaiyaddeen or "guru Bawa" as he was generally known. 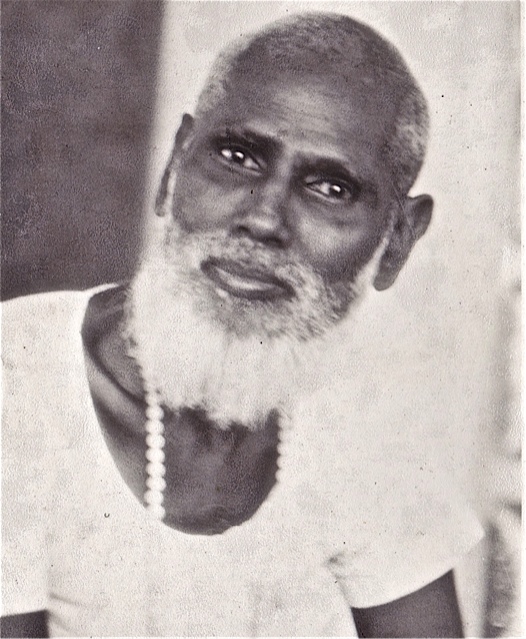 Bawa sat cross-legged, wearing the most simple cotton wrap-around lungi and a white tee shirt. He had such an unusual voice, almost a singing form of speech, a sound that felt like it was coming from some extra-human species or some other galaxy. Bawa's high-pitched, melodic Tamil was being simultaneously translated into English, as we were being led through the assembled crowd to be seated directly in front of and slightly beneath Bawa.

Within a minute or so, Bawa suddenly stopped speaking and looked down, directly at me, or rather through me, with eyes that pierced my soul. As he looked, I knew he knew everything there was to know about me. It was startling, but there was no fear. Beyond age, gender, religion, culture and language, this man spoke softly into my soul, and for the first time in my life, I knew there was such a thing as a human being with no ego, only heart, only love.

My life changed at that moment. We were invited to stay, and my friend and I decided to put our clove smuggling aside, at least for the present. We lived with Bawa in Jaffna for six weeks, helping him build "God's House," a place where Christians, Muslims, Hindus and Buddhists could pray together. Bawa had a vision that there would be religious violence erupting soon in Sri Lanka and people needed a place to pray together. One day about a month later, I found myself 100 or so feet up in the air, atop a tower of lightly swaying bamboo scaffolding, looking down at Bawa, who was looking up at me, trowel in my hand as I applied a top coat of plaster on the inside surface of the mosque's onion dome, something I had always dreamed of actually doing! As our eyes found each other and he smiled at me, I had this moment of unforgettable joy, of absolute and total bliss. Meeting Bawa was a defining moment in my life. Not only did his love need no translation, it was beyond words. Beyond words in perhaps a similar way that almost five hundred of Rumi's odes end with the word "khamush!" meaning silence.

Returning to the US, I moved to Philadelphia since Bawa was going to be living there, at least for the next year. I started a graduate program in Film and Visual Anthropology and for my first few months in Philly, I lived at Bawa's fellowship house on Overbrook Avenue. Bawa spoke every day in Tamil, and his words were faithfully translated and always inspiring and transfixing to the thousands of people who were fortunate to meet him.

One of those fortunate ones was Coleman Barks. Bawa played a spiritually catalyzing role in Coleman's life when Bawa gave Coleman his blessing to translate Rumi for Western audiences. As a poet, translator and interpreter of Rumi, Coleman Barks of course went on to become the person most responsible for Rumi's immense popularity in the West. Coleman credits Bawa for the heart behind his translations of Rumi. Recently in New York, Coleman told us in a filmed interview:

"I think what brought me to Rumi was this connection with Bawa Muhaiyaddeen who came to me in a dream on May 2, 1977. He raised his head in the dream and he said 'I love you.' And I said, 'I love you too.' There was some kind of exchange, some synapse, something just happening... And so what I love about the (translation) work with Rumi is that something is just happening and 'I' just have to get out of the way, you know. And when I work on a poem and its really going well and I finish the piece, I just bow. Something inside me wants to bow and say 'thank you.' That's why it feels so good. That it's not coming through some self-expression. It's not that kind of satisfaction. It's some other kind of satisfaction."

I realize I know a little bit about that satisfaction. It's when one feels so totally aligned with one's work and one's purpose that one feels some other force is working to help. It's a sweet feeling. I remember back in 1975, Bawa let me take photos of him and he told me it was OK to keep taking photographs and making films. I trusted that blessing and have been making films and television programs ever since. They are all inspired by Bawa Muhaiyaddeen and in some way incorporate his central teaching that "we are all one family," all part of what Bawa called "God's funny family."

As we create and launch this multi-lingual Rumi website: OneThroughLove.org and as we present Rumi's original Persian ghazals, translated into English, Turkish and Arabic, I am reminded how translating or interpreting Rumi takes not only someone with deep Persian and English language competence, but the spiritual wisdom and the Sufi heart of a man like Coleman Barks, Andrew Harvey, Sharam Shiva, Kabir or Camille Helminski. They attempt to do the impossible -- to move from a literal translation of the original Persian to find its most truly resonant and parallel English equivalent, to convey not just a sense of Rumi, but an experience of Rumi.

Using visual imagery and music, the One Through Love project tries to unlock some possibility of a direct experience of Rumi. Remembering those eyes of Bawa Muhaiyaddeen, something which ultimately lies beyond language and beyond translation. In that spirit, here is a video segment of a recitation of three Rumi ghazals (odes) by Coleman Barks. His mastery of the material creates the possibility of conveying an experience of Rumi, for English speaking audiences.

Among our project's growing circle of Rumi luminaries, our so-called "gathering of lovers," we have been fortunate to include the perspectives and insights of knowledgeable Iranian scholars and translators, including Dr. Elahi Ghomshei, Dr. Sayyed Nasr, Dr. Leili Anvar and Sharam Shiva. With each of them, we acknowledge how this ecstatic poet-teacher lived within an Islamic, cultural context and explore the subtleties of Rumi in the original Persian vs. Rumi in translation.

The One Through Love project aspires to transcend the very limitations of language and break down all walls and divisions, to allow Rumi's poetry to ignite hearts and souls, and ultimately to connect people across oceans, languages and faiths. I can also now see how with this website, we are giving a 21st century form to Bawa's notion of "God's funny family" -- a Rumi-based, multi-lingual website where we are all truly One through love.