Everyone who's owned a car remembers their very first one -- the pride, the happiness, the sense of owning something big. No matter how old or rundown it is -- it's yours! It's your vehicle to freedom. At least that's how I felt when I got my first car in a state where everyone depended on their vehicles to get around. I will never forget it -- a grayish, rundown 1984 Volvo 760 GLE. It was almost as old as I was but I loved it and drove it with pride.

I had many adventures with it, mainly involving going to the mechanic. After my car nearly exploded because I had no idea it was overheating, I quickly learned where to put antifreeze every few miles in the summer, or how to check my tires' air-pressure and pump them up every other day in the winter. If I wanted to keep my 'baby' running, I had to overcome the fear of looking (and digging) under the hood.

I remembered all this when I interviewed Audra Fordin for The Story Exchange last week and we discussed the complicated relationship many of us (unfortunately, especially women) have with our cars. 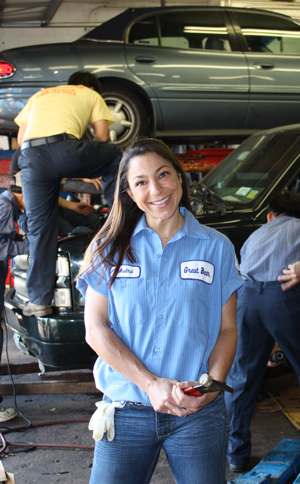 Fordin is a rare woman in her business and her ambition is to change the way we think about cars.

"The auto repair industry as a whole is stuck in a time warp of the 1970's. It is a stereotypical male dominated field that needs a transformation, big time," Fordin shared in her Story Exchange submission.

And she has taken that transformation into her own hands. In 2009 she launched the nonprofit Women AUTO Know to educate and empower women of all ages "to be safe, confident and knowledgeable drivers, passengers, and consumers."

Her free workshops teach women (and some men) everything from how to change a tire, to ensuring the right air pressure in it to save on gas, and much more. It's easy to understand the mechanics if you look at vehicles through Fordin's eyes. In her world (much like the Disney/Pixar movie Cars), automobiles have human qualities.

"We need to wear sunscreen on our skin to keep it from getting burnt and it's the same with the car. If you wax it, wash it and you keep a protective finish on it, then it would be able to withstand the seasons," teaches Fordin.

For those who can't make it to her workshop location in Flushing, Queens, Fordin offers online webinars, DVDs, a glove-box guide, and -- for iPhone users - an app that puts everything at their fingertips. Besides useful advice that can help in emergencies or protect them from mechanical scams, The What Women AUTO Know app also records the sounds that their car makes, so they can avoid the embarrassment of trying to recreate the noise for the mechanic.

Fordin has put her woman's touch on used tires, as well. Instead of letting them pile up in landfills and contaminate the water, she gives the old tires to veterans to shred them into fancy belts and leashes.

With Women AUTO Know, Fordin says she's eager to pass her passion on to younger generations.

"I believe that when the auto-repair industry is referred to as being male-dominated it's a problem with society. It's not that women can't do it, it's that at a young age they're told to do something else."

So Fordin got involved with the Girl Scouts and the Boy Scouts to teach and show them that the auto industry is an equal opportunity for all, that spans beyond just fixing cars.

"I've seen so much opportunity for employment for women in every aspect of the automotive industry, and it doesn't stop at sales or automotive insurance, or automotive painting, or automotive design... And I'm really proud to be at the forefront leading the change, opening the door for so many to really just walk in and do it. If they like it, then let's rock!"

Watch Fordin talk about the biggest lesson she's learned about running a business.