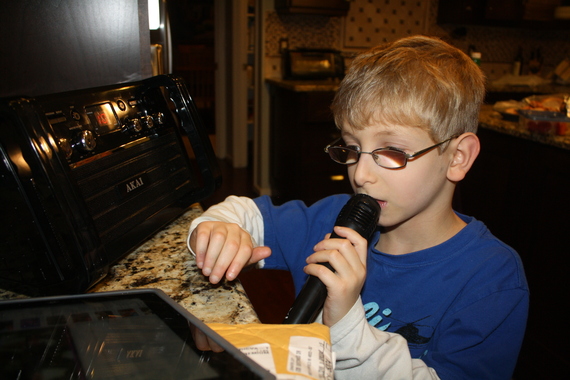 As a journalist, I've met and interviewed hundreds of people. A good interview flows like a conversation and because I love talking to people and hearing their stories, the interview is often my favorite part of being a writer.

Then there were the difficult interviews; mysterious fires, political controversies and allegations of abuse, just to name a few.

But hands down, the most difficult "interview" is the one I periodically try to have with Evan. I so desperately want to understand his way of thinking. I want to see the world through his eye and know what makes him time. I've written about this before and I think about it a lot because I crave insight into what makes this complicated little boy the person that he is.

On countless occasions I try to talk to him to get a better understanding of who he but it's hard. Of course it's hard to get any nine-year-old kid to really talk about his thought or feelings but with Evan it's different. I feel fortunate that he is verbal but even though he talks, there is so much he can't articulate. But that doesn't mean I stop trying.

The other day I pulled out my reporter's notebook -- ok I don't really use one of those anymore -- and sat down for a formal interview with Evan.

Q: What are some of your favorite things?
A: I like iPads and lights and basements, unless they have spider webs.

Q: Why?
A: Because spider webs scare me. I like lights because they are so bright.

Q: Why do iPads make you happy?
A: Because you can watch videos and play games.

Q: Evan, I've seen you use those videos to help you not be scared of things how does that work?
A: Good.

Q: No, how does watching a video help you to not be scared of something like going to a theater?
A: It's because I can see the stage and I know it's very bright.

Q: But you don't like the moon because you've said it's too bright.
A: I love it now. I don't know why I used to be afraid of it.

Q: What do you want to be when you grow up?
A: When I grow up I want to be a lighting designer which controls lights at theaters.

Q: What are some of the things you hate?
A: I hate the dark, sirens and fire. I also hate when people say Einstein, appreciate, that's the way, perhaps, Lucy and people too.

Q: Why do you hate certain words?
A: I don't know.

Q: How come it's ok for you to say the words you hate but you don't like it when other say those words?
A: I don't know.

Q: Do you want to know?
NO ANSWER

Me: "You're smart, you're funny and fun, you have a great memory, you see things in ways that nobody does and you teach people every day without even knowing it."

Q: What makes you happy?
A: My friend Logan and lights. And you, because you're nice.

Q: Do you know any jokes?

Evan: Knock, knock
Me: Who's there?
Evan: Mom
Me: Mom who?
Evan: Mom breaks the light.

Q: What the best thing that's ever happened to you?
A: Not being in the dark.

Q: Tell me something about you I don't know.
A: I broke lights one time.

Q: What was your favorite vacation?
A: The Smoky Mountains.

More:
interviewParenting ParentsJournalismAutism
Newsletter Sign Up
Raise the kind of person you'd like to know
Subscribe to our parenting newsletter.
Successfully Subscribed!
Realness delivered to your inbox