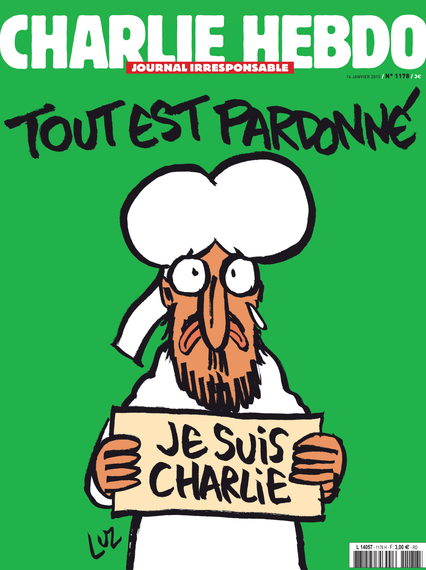 More than a week after the Charlie Hebdo massacre in Paris, American comedians have made it clear that they stand with their fellow satirists in France. From Jon Stewart and Conan O'Brien's heartfelt remarks, to Louis CK's homemade Charlie Hebdo T-shirt, to The Simpsons' tribute where Maggie holds a flag reading "Je Suis Charlie" -- the slogan that's gone viral since the satire magazine was attacked last week. Of course, the only comedian who went further was Bill Maher, who has made it very clear that he dislikes Islam -- and religion in general -- calling it "stupid and dangerous." Despite this, Maher still joined the rest of the American comedy community to condemn the senseless terrorist attack.

There were others who joined the condemnation as well, and not just from comedy. The political world got involved as folks like Ron Paul said the terrorist attack was due to "blowback" -- a result of the United States' military-driven foreign policy in the Middle East. Judge Andrew Napolitano said France's strict gun laws allowed the gunmen to shoot the Charlie Hebdo staffers like "fish in a barrel." David Brooks at The New York Times wrote the massacre should be "an occasion to end speech codes." And Russell Brand wrote a bunch of crazy shit about God. The rest of Hollywood did their shout-outs at the Golden Globes, and Liam Neeson said that U.S. gun laws were "a [bleeping] disgrace," even though the attack happened in a different country and he's in another movie playing a dad who kills bad guys with guns.

Why did everyone feel so moved by this particular tragedy that they felt the need to comment? Why am I commenting a week later after I finally looked up what "je suis" means? It's because this wasn't just another strategic, well-orchestrated, high-profile massacre in the heart of Western civilization. The most tragic element of this terrorist attack was the target: satire. It happened to the funny people -- the cartoonists, the jesters. Those people aren't supposed to get killed for what they do. For thousands of years, our species has known comedy as the literal opposite of tragedy, and the role of the funny person in society has long been revered, respected and protected. Rarely is comedy met so directly with tragedy that comedy actually has to stop. They are like oil and water -- they're scientifically not supposed to mix.

Comedians, like all people, die eventually. Over the last few years, we've lost plenty of the classic comedians from the 20th Century, but most of them were old and established and ready to go. Sometimes we lose a funny person prematurely to their own hand -- be it by suicide or overdose -- like Lenny Bruce or Robin Williams. And while that's certainly tragic, as Dana Gould has so eloquently put it, deep down many funny people seem so troubled they need to end their own lives. Oddly enough, it seems like society is even growing dull to that trend. But very rarely is a comedian actually murdered directly because of something funny that they did.

Societies have censored satire for hundreds of years -- usually because the people in power had problems with the material. Heck, Charlie Hebdo began because another satirical magazine in France was censored. One of my favorite professors at the Columbia Journalism School, Victor Navasky -- former editor of The Nation (which started as a satire publication) and author of The Art of Controversy, a book highlighting the power of political cartoons -- made the point that the tragedy in Paris "was triggered by the ostensibly harmless medium of the cartoon, the caricature." At the end of the day, these cartoonists were doomed due to their doodles. Only this time their opponents weren't just bullies on the playground, politicians in power or even bloggers on the Internet. They were well-trained extremists with high-powered guns. And now all those funny people are dead... Just because of their jokes.

They say that the best thing for a satirist to do is to persevere, to "Keep Funny and Carry On," as it were. And, in the spirit of satire, the remaining editors and cartoonists at Charlie Hebdo did just that with their latest cover this past week. It was a perfectly appropriate response on what will be the most collected edition of the satirical magazine in history -- a cartoon image of a tearful Muhammad holding a sign that reads "Je Suis Charlie," with a headline that means in English, "All is Forgiven." Indeed, everything is forgiven. And fuck your beliefs for not letting us draw what we want to draw. Life will give us tragedies until the end of time. It's tragedy's polar opposite, comedy, that keeps us going, keeps us fair and keeps us funny.