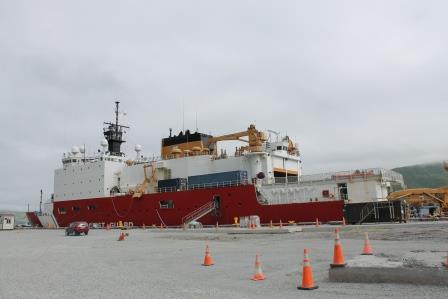 I arrived in Dutch Harbor on Tuesday in a 30 passenger propeller plane. Scientists from all over the United States have been trickling in this week to prepare the Healy for our upcoming Arctic GEOTRACES expedition. Dutch Harbor is located on Amaknak Island, part of the Aleutian chain stretching southwest from Alaska. The trip from Anchorage to Dutch Harbor takes 3 hours with a mid-way refueling stop on King Salmon Island. The pilot had little faith that the fog would lift for our landing, but we got lucky. The previous day strong cross winds forced a plane with a group of scientist to turn back to Anchorage, 6 hours in the air just to land in the same spot. Every carry-on bag, checked luggage, and passenger has to be weighed and when the plane is too heavy, checked bags are left behind. The whole science party has safely arrived in Dutch Harbor but some bags and packages and still coming in.

There is little cell service or internet on the island, a perfect transition to life at sea. We are staying at the Grand Aleutian hotel with a mixture of fishermen and Shell employees. After landing on the island I rented a car to drive around and explore, 20 minutes later I was back in the same spot. Amaknak Island is small, but beautiful and alive with wildlife. There are big rolling hills covered with greenery and wild berries, bald eagles flying overhead, dozens of spouting whales swimming in the bay.

It's been a busy week in port getting shipboard laboratories and sampling equipment ready for our first stations. This involves mixing chemicals to make reagents, moving gas cylinders, and getting our analytical detectors turned on and running smoothly. Everything inside and outside of our labs has to be secured and tied down by the time we leave port and the science party has been busy with cranes and forklifts moving everything to its proper place. The Healy will leave port August 9th with 51 scientist and steam into the Bering Sea for the first stations of Arctic GEOTRACES. 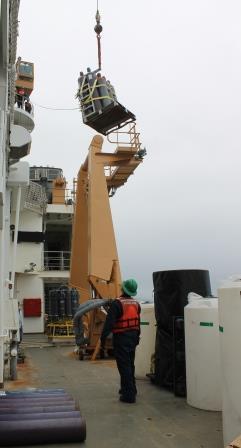 Moving gas cylinders that will be used to run laboratory instruments during the U.S. GEOTRACES Arctic expedition. 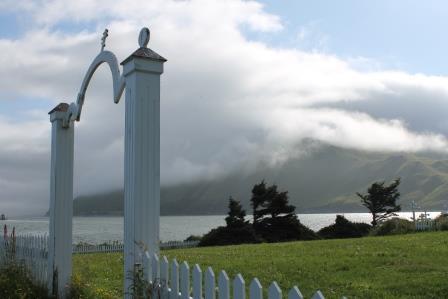 Thick fog trapped between the hills on Amaknak Island can make landing difficult. 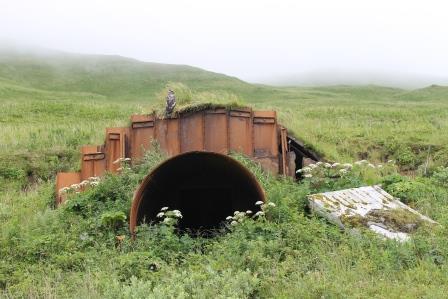 Exploring Amaknak Island I found bunkers embedded into the hillside. Dutch Harbor was attacked by the Japanese during World War II.