If you spend any time on the internet these days, you'll often find yourself swimming in a sea of clickbait titles (like the one above). They are rightly ridiculed, and I wanted to parody one today because I don't think this 'weird trick' will be what most of those articles say. It's more the type of thing your mother or grandmother would nag you about. 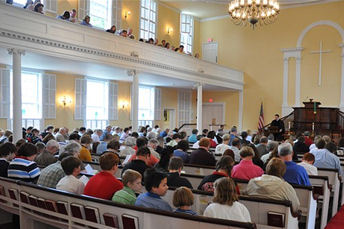 If you're decidedly non-religious, or perhaps a Christian who gave up organized church some time ago, your skepticism glands will be flaring wildly right now. So, let me explain.

About a month ago, Harvard School of Public Health Professor, Prof. Tyler Vanderweele, met our graduate student community at Harvard and shared some of the research he'd been working on. He's been analyzing data from 1996 to 2012 that came out of a longitudinal study of 75,000 female nurses in the US. In particular, he was researching the effect of religious service attendance on health, and the results were somewhat startling.

Nurses who attended services more than once a week were 33% less likely to die than those who never attended religious services. Interestingly, service attendance didn't decrease the likelihood of cancer or cardiovascular disease, but significantly improved survival. This was after accounting for other risk and lifestyle factors (such as smoking, obesity, and age). These results were published on May 15th here .

Now, if your skepticism glands are flaring, then you'll probably have some questions. You might argue that the health benefits come from other routines - like eating well and exercising - and well-routined people also happen to be more likely to go to church. Causation generally can’t be proved with this sort of data. Professor Vanderweele, however, pointed out that their data allowed them to control for a large number of the potential common causes of mortality. The controls were so thorough that the evidence for service attendance causing these health benefits ‘seems quite strong.’

Maybe the qualifier 'religious' sounds superfluous. You might want to say that any commitment to a supportive community - religious or otherwise - would have these health benefits. I questioned Professor Vanderweele about this as well, and he explained that, yes, any supportive community has health benefits, but religious communities had a significantly larger effect.

You might have further questions (we always have more questions with studies that doesn't match our worldview!), and if you want to message me (privately or in the comments below), I might be able to get Professor Vanderweele's responses (no promises!).

There are, of course, a number of limitations of the study. It was a study of middle-aged and older women, so results may differ for men or younger people. There weren’t enough participants of non-Christian religions to compare the effect of different religions’ services, although they were able to compare Catholics with Protestants (the health benefits were similar for each). There's still further research to be done to probe more thoroughly the medical mechanisms to describe exactly how service attendance improves mortality. None of this, however, discounts the conclusion that religious service attendance decreases the likelihood of death, at least in middle-aged and older women.

In Western society, religion has become such a definitively private matter - a reality that certainly has its benefits and flaws - and this enforced privacy makes it difficult to know what to do with these conclusions. Can a doctor prescribe going to church if it's been shown to increase your chances of surviving cancer? Is this a practice a doctor simply cannot recommend because our commitment to the privacy of religion is more important than survival? Can we rightly withhold this recommendation, knowing that it significantly increases survival on account of the social sensitivity there is about religion?

These are all important and challenging questions. In reality, no-one is recommending that doctors prescribe service attendance as a norm. Perhaps, however, if the doctor knows that a patient is Catholic (for example), but has ceased attending mass regularly, she could tell the patient about the known health benefits of service attendance as a light encouragement to consider this 'weird trick'.

The fact that service attendance produces such benefits does seem weird. Particularly when the researchers could not find such benefits associated with religious affiliation, individual religious practices, or beliefs. Western society is quite individualistic, and Christianity has been infected by this, such that (particularly in Protestant churches) we have convinced ourselves that all that really matters is our personal convictions, practices, and morality. Church and Christian community has become increasingly optional. The fact that going to church regularly makes the difference seems weird to us. I think, however, it's part an appropriate corrective to the rampant individualism that has infected Western Christianity. But you'll have to wait for Part Two for more discussion of the common perception of church as an optional practice for Christians.