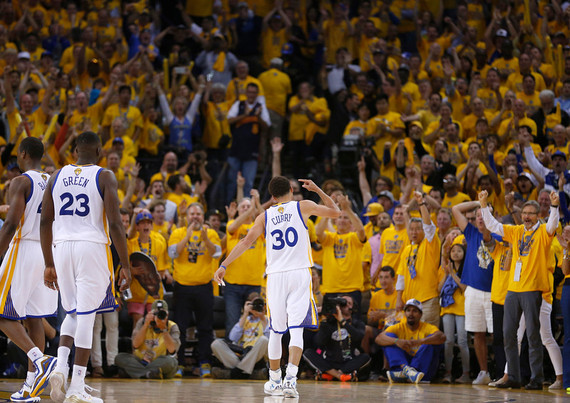 They left it all on the court. Their backs were against the wall, and they didn't panic. The Warriors protected home court just as they've always done. Despite LeBron James triple-double, Golden State is now one win away from the ultimate goal, the NBA Championship.

The Warriors went up 3-2 in the NBA Finals when they defeated the Cleveland Cavaliers 104-91 on Sunday night. Stephen Curry made seven three-pointers, scoring 37 points and moving one step closer to his first NBA championship. It's been an amazing series. Both teams have battled through exhaustion and fatigue.

"We fought hard all year and put ourselves in a good position now to go to Cleveland and hopefully close it out," said Curry. "So we're confident. We're not getting ahead of ourselves. We know the sense of urgency of the moment."

Curry scored 17 of his 37 points in the fourth quarter. The most memorable shot was his last before finishing the night with free throws. He dropped a dagger after dazzling the sold out crowd with his outstanding ball handling. The Warriors collectively outscored and outrebounded the Cavs in the fourth. They went 12-for-26 from three-point range, led by Curry.

The defense was phenomenal. Golden State pulled away late giving themselves its biggest lead of the night. James made a three-pointer with the shot clock about to expire to put his team within one point, 80-79, but the Warriors clapped back quickly. With 2:44 minutes remaining in regulation, Curry responded with a three-point shot and Klay Thompson followed with another and Andre Iguodala also hit a three.

"I don't know, were any of them not contested?" James said of Curry's shooting. "Falling, step-backs off the dribble. I'm OK with that. We're OK with that. You tip your hat to the best shooter in the league." 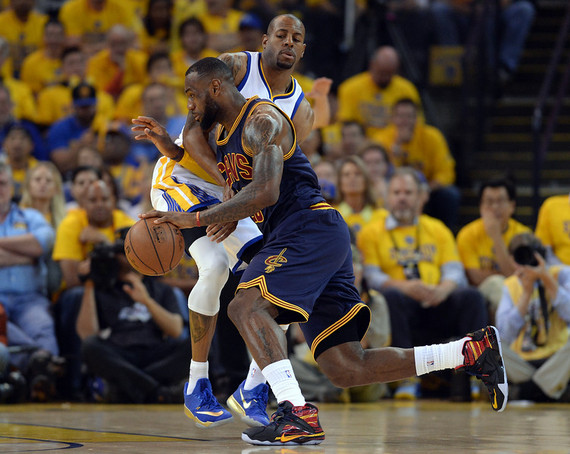 One win away from winning the title, the Warriors really have nothing to lose. They head back to Cleveland to play Game 6 on Tuesday. Then they head back to Oakland on Friday for the final game of the series if necessary. They can close it out on Tuesday or win back at home Friday. The way the last two games have gone, Golden State is playing their type of basketball.

"The reality is this is a small series, and it works well for us," said Warriors head coach Steve Kerr. "We're comfortable with this style."

Kerr shocked us all when he inserted Iguodala into the starting lineup for Game 4. He stayed with that same starting five and chose not to play center Andrew Bogut. Using their small lineup, the Cavs were no match for Golden State by the fourth quarter. Cleveland's head coach David Blatt has yet to use his full bench while only playing seven to eight players.

James has shouldered the load, but the NBA's best players can't win alone especially against a very young and talented team. He scored or assisted on 17 straight shots made by the Cavs to start the game and kept the lead close until halftime. By the time the fourth rolled around, James showed fatigue and missed easy shots. The Warriors stepped up their defense and began dropping three's all over the floor.

Iguodala stifled James in the second half, making him go 7-for-22 from the field. But that didn't stop the two-time NBA Champion from praising his skills as the best player in the world despite being a loss away from his season being over. Confident that they can win at home, James knows he has to be better in order to keep this series going. But how do you stop the league's MVP?

"I feel confident because I'm the best player in the world," said James. "I don't put a ceiling on what I'm capable of doing. I know I'm shouldering a lot of the burden, but it is what it is."

The best player in the world has one last chance to stop Golden State from hoisting the NBA trophy on his home court. Many don't think he's capable nor do the Warriors who have an opportunity to win their first NBA championship since 1975. They feel more confident going into game 6 than they have in past games. Knowing they're one win away from a goal set back when the season started is too unreal.

"What is the best way to say really bad?" Curry said of being one win away from the title. "I mean a long season goes into these last moments of the Finals series."