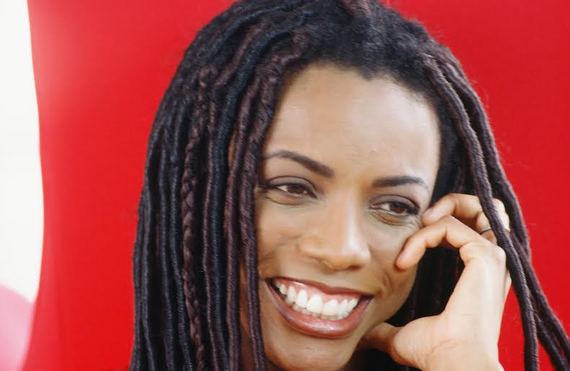 You have only to read a few poignantly detailed paragraphs below which tell about the life changing journey of Ingrid Griffith and her family from Guyana to the United States to want to see her new one-woman play, DEMERARA GOLD, at Dorothy Strelsin Theatre in Manhattan. Griffith plays no less than 18 people in her autobiographical collage of characters.

The path of immigration is something that most American citizens have in common somewhere in their history. We have heard and continue to hear the many stories of Jews, Chinese, Italians, and the Irish who came across the world from their foreign lands to Ellis Island to become Americans. But the humanistic contemporary stories of the newer traveler with bags packed full of hope for a better future are less known.

The new immigrant comes with no less a determined heart and soul and sometimes perceptions that make them feel alone in their unique position, anywhere other than home. DEMERARA GOLD is a coming of age story about the effects of immigration on personal identity and family dynamics.

Over a decade ago, I found myself in New York City on the road to a professional path in business. I had earned a college degree, had a good-paying first job on Wall Street, enrolled in the 401k plan, had found a roommate and was ready to share an apartment that was centrally located in Manhattan. Basically, I had a degree of comfort and peace of mind.

But I also had a persistent feeling that something was missing. I heard my father's voice as he railed at being stuck in a decent paying but low-level job, at the lack of respect he felt in America, at the frustration of being underutilized and misunderstood. In Guyana, he had been a teacher, an accountant, a steel band player. He was from a respected family, part of a vibrant community. In America, he was just a supervisor in a Long Island factory. His name carried no weight and his presence was overlooked. I carried his bitter indignation with me as I left home to make my way in the world. I carried the wounds that immigration had inflicted on my identity and on my family. Then it dawned on me. I couldn't turn the clock back but, I could tell the story.

I could tell about the pain of separation when my parents were forced to leave my sister and I behind when they emigrated to Long Island. I could tell of the years of wondering when we would be a family again. I could tell of the exhilaration of reuniting and the wonder of America. I could let people know what it felt like to leave the bustling familiarity of Georgetown for the blank windows and silent empty streets of suburbia, the incessant television shows, the hip new clothes and language. I could let people know how it feels to be invisible in a school dominated by upper middle class white kids who drove their own cars to school. I could tell what it was like to become a woman in a society of new and strange expectations and conventions.

The move from Guyana to Long Island was jarring. It seemed as if one day my grandmothers were keeping vigil over my sister and I, making sure we passed no words to the jolly and vocal boys on our Georgetown street. Suddenly, I was feeling pressured to lose my virginity. Try culture shock in the back seat of a car.