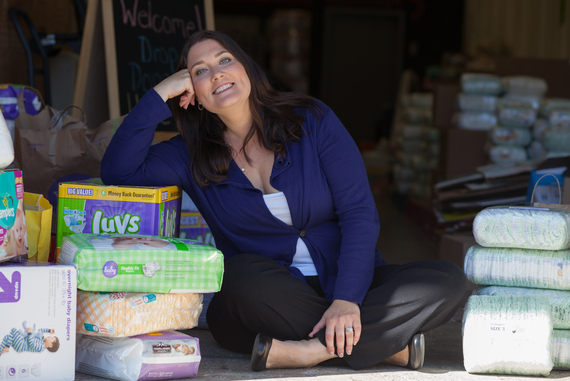 Her son, Jack, was a colicky, restless, challenging baby. With each scream, with each tense, trying, bleary-eyed night, she grew more frustrated--even angry. And then she had an epiphany:

If I have resources, and I feel like this, what is it like for mothers who have nothing?

And that led to a second epiphany.

"I remember being at a park," Corinne says. "I was complaining and saying, 'Somebody needs to do something about this.' And a friend of mine turned and said, 'Corinne--you're somebody.'"

In 2010, on Jack's first birthday--and after begging other organizations to meet this need--Corinne founded the DC Diaper Bank. Since then, the organization has donated an astonishing 2.9 million diapers to local families, along with supplies ranging from baby food to formula, from feminine hygiene products to adult diapers.

I met the ebullient Corinne in March when we shot scenes for 650,000 Hours. Now, as she prepares for the birth of her third child--and as 650,000 Hours plans a major diaper event for June--we chatted about everything from babies to brain health to giving back.

When you started the diaper bank you had an infant son and a full-time job. What were you thinking?

I don't know [laughs]. I look back and think--What the hell was I doing? I was tired all the time so I decided: You're going to be tired. You might as well be tired doing something you care about.

You've said that the diaper bank's work is not about diapers. How so?

Our work is about stabilizing families and reducing stress for mothers. The health of infants is closely linked to their mothers' mental and physical health. So if women are stressed, the baby won't do well.

And that has long-term effects, right?

The first three years of a child's life can fundamentally change their trajectory. If you have three years of poor brain nutrition, you can't fix it when the child is nine. The damage is done.

So what is the diaper bank's role?

Women face a lot of barriers to seeking help. Admitting that you can't feed your child is terrifying, especially for a young mother. We want to alleviate the financial burden and the guilt, and we use the incentive of diapers or formula to connect mothers to social workers and other resources. I call these gateway resources. It's a way to engage a mom who wouldn't otherwise reach out.

You've said this job makes you cry. Why?

It angers me that children are going hungry. That women are reusing diapers or using fast food napkins for tampons. When we talk to volunteers or donors--when people think what it would be like to care for an infant without resources--they're dumbstruck. Food stamps were cut about a year and a half ago by $1.3 billion over 10 years. But there was no conversation about the mental health aspects of a young mother listening to her baby cry because she's hungry. We're missing that part of the conversation--the reality of hungry children, children who are in physical pain from diaper rash, women who go without showers because they'd rather buy food than soap. That's what makes me cry. Because we do not need to be here.

How has the diaper bank brought you joy?

I never thought this is what I would be doing. This is not where I saw myself. But the more you say yes, and the more you say "please help," the more things grow. We have over one thousand volunteers each year. People want to help--they're excited to help--and that's where I find the greatest joy. It's made me more open to possibilities. And I hope that lesson carries over into the rest of my life.