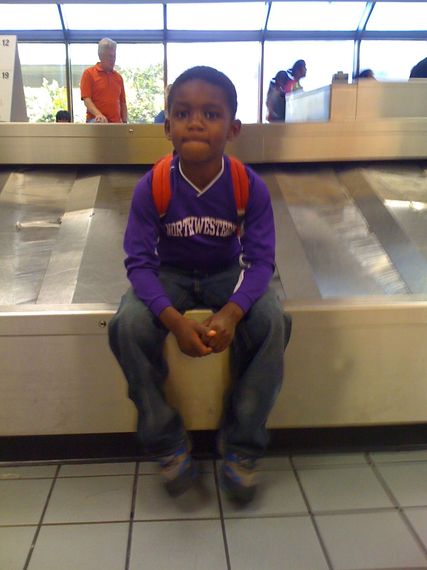 I know that the jumping off point for this post seems like first-world complaining and to some extent it is. Bear with me a little and I hope to scrape more than some superficial turf.

After a heavy snowfall at my in-laws this past Christmas, the topic of warm weather spring break retreats came up. "Bermuda!" said one sister-in-law. "No, no, Jamaica," declared the other. The Dominican Republic was proclaimed the must-visit destination this year. As the discussion moved to deep-red states in the southern U.S., my husband and I began to fade out. We nodded politely and said, "That sounds nice" with no intention of following up on the suggestions.

It's not that we're afraid of exotic travel. Before kids, we went to Turkey, South Africa and Thailand and even contemplated Lebanon. But after two adoptions and the current state of LGBT rights worldwide, our safe zones have become greatly reduced. For instance, other than a few American and Dutch islands, the Caribbean can be an openly hostile place for LGBT travelers. We might risk it alone, but with kids that kind of travel is a non-starter.

When our oldest was 4, we took a trip to the Caymans. As dozens of American and Canadian families were waived en masse with cursory passport control, my family was pulled aside and questioned by an immigration officer. "Who is this child? Where is his mother? How can you adopt?" were just some of the questions she asked openly in front of my son. Fortunately we were prepared. We carried passports, adoptions decrees, original birth certificates, letters from our agency and attorney and even photos of our "coming home" day. The barrage of official paperwork and our calm demeanors seemed to overwhelm the immigration officer and finally she relented. We were allowed into her tiny island nation after a 10- or 15-minute delay. It could have been much worse. Nonetheless, I will not allow my children to experience anything like that ever again.

The worst part of that experience is that it could be repeated here in the U.S., perhaps not at an immigration office but in an emergency room or police station. Some U.S. states seem to go out of their way to make things difficult for LGBT families. In 2007, hospital administrators in Jackson, Florida denied a lesbian visitation rights to her partner who had suffered a fatal aneurysm, stating that Florida was an "anti-gay state." The partner died before the case could be taken to a judge who may have sided with the hospital in the end. Apparently making lives difficult for others is a new tenet of many people's religious beliefs.

Yes, these are the thoughts that come to my head when people make travel suggestions to me. A bit morbid? Yes, perhaps so. Before I set foot on a plane, I research the local environment for LGBT families in addition to best restaurants and suggested activities. Perhaps as a backlash from LGBT successes, some parts of the world and of the U.S. have taken a deliberate and strident step back. Unfortunately, I'm afraid to state, it's a very small world for families like mine.

I reflected on all of this on Martin Luther King, Jr. Day a few weeks ago. I re-read "Letter from a Birmingham Jail," one of the greatest treatises on human dignity ever written. Dr. King wrote about two concepts: mutuality and tension. Responding to critics who called him and others outside agitators, Dr. King wrote, "We are caught in an inescapable network of mutuality, tied in a single garment of destiny. Whatever affects one directly, affects all indirectly." To wit, that immigration officer, the hospital administrator and I are all woven together into the same human family and the same common destiny. Each of us occupies the same space and shares the same time; can we not allow each other some civility and human dignity?

Dr. King also wrote about a corollary concept of constructive tension that brings about change and growth. Just like in the Civil Rights Era, we do not need to create tension because it's so evident in our politics, our media and even in our coarsening discourse. But rather than remain silent and be polite, Dr. King exhorted us to embrace those tense moments and master them so that we do not repeat the past's sins for the sake of the present's quiet. If we each recognize our mutuality, perhaps that conversation can even be civil and generous. Not because we falter on our points, but because we can afford to be generous. After all, the arc of history is on our side.

In the 1980s, the Police wrote a song titled "One World (Not Three)" as a plea for understanding during the Cold War. They sang that the superpowers didn't have the luxury of having separate worlds to sort political differences. And neither do we, gay or straight; we share one world, not two.

Perhaps one day, when my boys are older and can speak for themselves, we'll venture back to the Caribbean but for now, maybe Orlando is as political as we'll get.