From One World One Ocean:

Less than two months ago, HuffPost Green covered the launch of One World One Ocean (OWOO) -- a new nonprofit campaign that is harnessing the power of film, television and new media to spark a global movement to protect and restore the ocean. Founded by MacGillivray Freeman Films, the largest independent producer of IMAX films, OWOO aims to be the largest multi-platform, media-driven campaign of its kind in the ocean conservation space.

To do this, One World One Ocean, in collaboration with MacGillivray Freeman Films, is sending its award-winning film crew to all five ocean basins, harnessing the power of the latest, most cutting-edge IMAX technology to bring to life the world of the ocean on the big screen, television and online.

This week, One World One Ocean embarks on its inaugural expedition, reporting live from Cocos Island. [Text continues after images.]

Images and captions courtesy of One World One Ocean.

Cocos Island National Park, located 360 miles east of Costa Rica, is one of the few areas of the ocean that enjoys official protection. The area is known for its incredible biodiversity, especially its large marine animals like rays, dolphins and a variety of sharks. Marine protected areas (MPAs), like Cocos Island National Park are, in essence, places in the ocean where human activities, like fishing, are more strictly regulated than the surrounding waters -- similar to national parks on land like Yellowstone.

OWOO's goal this week is to capture as much content as possible to bring to life Cocos Island National Park in future media projects with a broader goal of showcasing the critical need for a global network of marine protected areas as a key strategy for restoring a healthy ocean.

The expedition also marks the first time that One World One Ocean is using a submarine as part of its filming. As part of this, one of the major themes OWOO will be exploring this week is the expanding role submarines play in ocean conservation -- in both helping better understand the ocean from a scientific perspective and for telling the story of the deep sea from a filmmaking perspective.

Costa Rica-based Undersea Hunter Group, one of the world's preeminent adventure dive operators, is supplying its DeepSee submersible and her mothership Argo for the voyage, making two dives a day to depths of up to 1,800 feet. The subs will allow OWOO to provide its audiences with an unprecedented look into the biodiversity of Cocos Island.

Shaun MacGillivray, producer at MacGillivray Freeman Films and managing director of One World One Ocean, provided insight into the beauty of Cocos Island and the first day of diving at the Everest wall, a unique seamount teeming with marine life.

"Cocos Island feels and looks like the setting of Jurassic Park. Uninhabitable. Prehistoric. Natural. Lush. While the island itself is beautiful, its underwater world is even more stunning," said MacGillivray. "As filmmakers, we've been amazed at the process of launching a sub, which is a mammoth structure weighing more than 15,000 pounds. It's definitely given us a whole new appreciation for scientists who do this on a routine basis."

Check out today's photos from the trip, which provide a behind-the-scenes look into submarine exploration, complete with incredible shots of hammerhead sharks, a native species to Cocos Island. Stay tuned for continued live updates from the expedition on HuffPost Green as well as on One World One Ocean Facebook and Twitter. 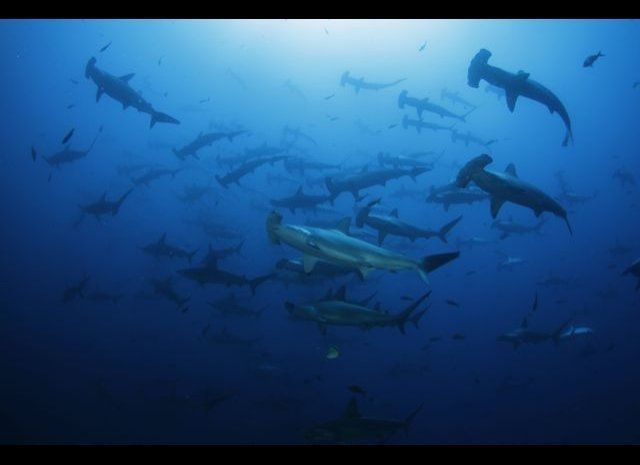