By One World One Ocean's Ted Reckas:

For the past six days, One World One Ocean has been reporting live from what could be the final mission to Aquarius Reef Base, the world's last remaining undersea research station, 60 feet underwater in the Florida Keys National Marine Sanctuary.

The lab allows scientists to live underwater for up to two weeks at a time, pushing the boundary of what we know about the ocean. It is the last vestige of a rich 50-year tradition of ocean explorers living underwater, started by Jaques Yves Cousteau with Conshelf I, in 1962. Aquarius has been cut from next year’s federal budget and may be closed as soon as December.

Because it has provided two decades of research and discoveries, from understanding the disappearance of coral reefs, to studying sea sponges, the source of cancer drugs Halaven and Ara-C, NASA uses Aquarius to train astronauts for space, and just completed its 16th mission there, which focused on landing and working on an asteroid, a few weeks ago.

“It is one of the most valuable and productive tools the US has for coral reef science…It is also a wonderful test bed for ocean technology,” said Dr. Mark Patterson, Director of Autonomous Systems Lab, Virginia Institute of Marine Science, and lead aquanaut on Aquarius missions, in a letter to the leaders of NOAA.

Aquarius is important because it massively speeds up the timeline for getting science done. Patterson, said, “Scientists can accomplish in nine days what might take 9-12 months otherwise. It’s a time machine.”

Scuba diving is arduous, and most dives are about an hour because of decompression time. With Aquarius you don’t have to surface, so no time is wasted on decompression. Scientists can just return to the base from 9-hour dives, dry off, keep working, and repeat this for up to 16 days.

[Scroll past photos for more information]

Here are a few key areas of research:

• Chemical warfare between reef residents that leads to helpful drugs: reef organisms like corals and sponges have developed chemical defenses, many of which have lead to drugs used to treat heart disease, arthritis and cancer.

• Corals that protect themselves from UV radiation with sunscreen-like chemicals: how these chemicals work provides clues to causes of coral reef die-offs. Aquarius scientists were able to understand this process 10 times faster than if they were doing land or boat-based studies.

• Worldwide pollution: sea sponges have a much greater effect on filtering and improving water quality than previously known.

• Underwater vision: Coral reefs have a profusion of colors and we are just beginning to understand how animals perceive these. Aquarius studies have improved our understanding of color vision, and the ability to see in the dark using polarized light, which has far-reaching applications.

• Fossil records: Many things are happening in our oceans that scientists can’t explain, and researchers depend on fossils to understand natural cycles that occur on geological time scales. Since coral reefs are unusually well preserved, they enable us to understand the present within the context of an ancient continuum.

“We know more about the moon than we do about our ocean, even though the ocean sustains all life on this planet,” said Dr. Sylvia Earle, National Geographic Explorer-in-Residence and One World One Ocean science advisor who led the first all-women team to the Tektite undersea habitat in 1970. “Only by making undersea exploration and research an international priority can we learn what we need to know about the ocean to be able to protect it and protect ourselves.”

Our knowledge of the ocean is limited, and despite all of our technology, our efforts to shine a light on the underwater world are still tiny. We often don’t see the signs of a crashing ecosystem until it’s late in the game. Aquarius is our best chance to change this. It’s a place where scientists can live in the environment they are studying, and not only change our knowledge of the ocean, but change the way we approach science itself.

Beyond science, there is perhaps a greater value to Aquarius: it is not only a critical brain trust and national treasure, it is an example of how much more there is to do. It is a beacon of inspiration. Our push to go to the moon in the 1960s wasn’t motivated by finding a clean energy source for the world, or bringing global peace, or curing cancer. We went there because it inspired and united people. And not just Americans – it was an accomplishment for humanity. Aquarius motivates us to look inward instead of skyward, to find an even greater sense of pride than landing on the foreign soil of the moon: understanding our home.

A film crew from the One World One Ocean has been on the ground in Key Largo since last week producing an arsenal of multimedia and documenting the expedition in real time vial social media. From interviews with Sylvia Earle and guest visitors like Fabien Cousteau to a live underwater Google+ Hangout hosted by National Geographic, Mission Aquarius aims to shine a spotlight on this national treasure and celebrate 50 years of scientists living underwater.

Today, as the aquanauts prepare to emerge from the lab tomorrow morning, One World One Ocean will host a live event at 7 PM EST on Ustream where they will discuss the aquanauts’ experience over the past week and their hopes for the future of Aquarius and ocean exploration and research.

Visit Aquarius Reef Base Foundation’s website where you can learn how to support Aquarius and visit oneworldoneocean.org/aquarius to dive in to One World Ocean’s live coverage from Mission Aquarius.

One World One Ocean is a for-purpose media campaign by Oscar-nominated MacGillivray Freeman Films harnessing the power of film, TV and new media to spark a global movement to protect the ocean.

One World One Ocean: 'Shining A Spotlight On The World's Only Undersea Lab'
Undersea Lab 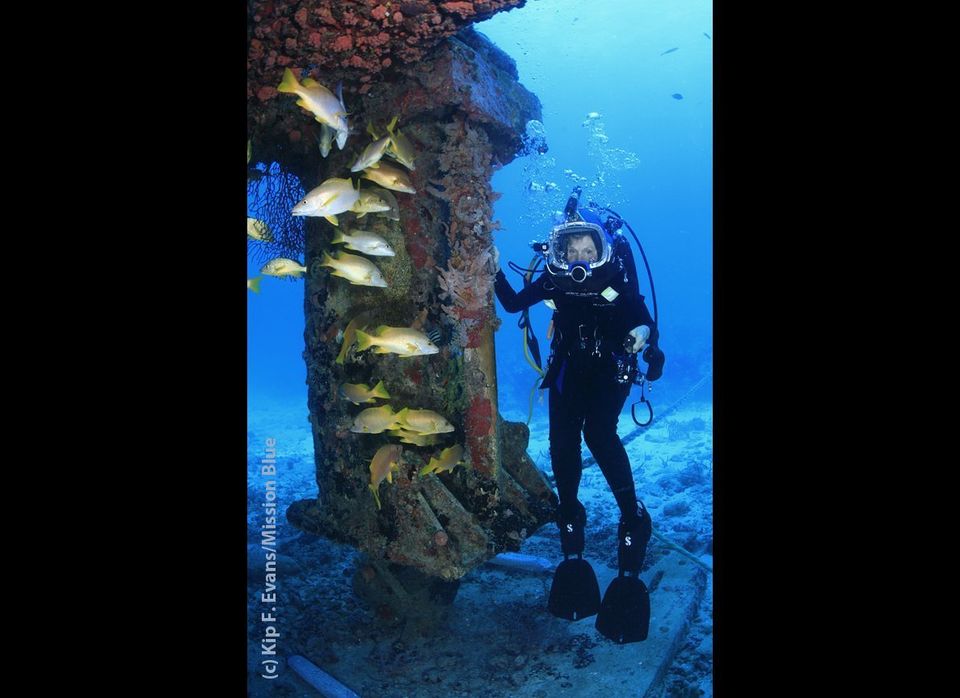