Photographer Mindy Tucker has been documenting the New York comedy scene for the past six years, shooting a variety of shows, headshots, events, parties and more most days of the week. Her work has earned her an impressive roster of clients and fans, including comedian Jim Gaffigan, who tells Huffington Post, "I love Mindy Tucker. The only pictures that I've ever really liked of myself Mindy has taken."

So when Tucker was asked to put up a show for the 10th anniversary of comedy venue The Creek & The Cave, she decided to pay homage to the diversity of talent the city's stages, both large and small, have seen over the last year. And so, One Year In New York Comedy was born.

Comprising roughly 570 photos, the continuous piece is 21 inches high and over 43 feet long, wrapping around the restaurant space of the Long Island City venue. The show can also be viewed on mobile and web, with each photo linking to the comedian's Twitter profile, making it as much a love letter to comedy as it is an introduction for the uninitiated.

The opening of the show on Saturday, coincides with the venue's anniversary party, and will feature an awards show hosted by local comedians and a keynote address by Colin Quinn.

Huffington Post spoke to Tucker about the show and how photographing comedians has changed her as an artist. 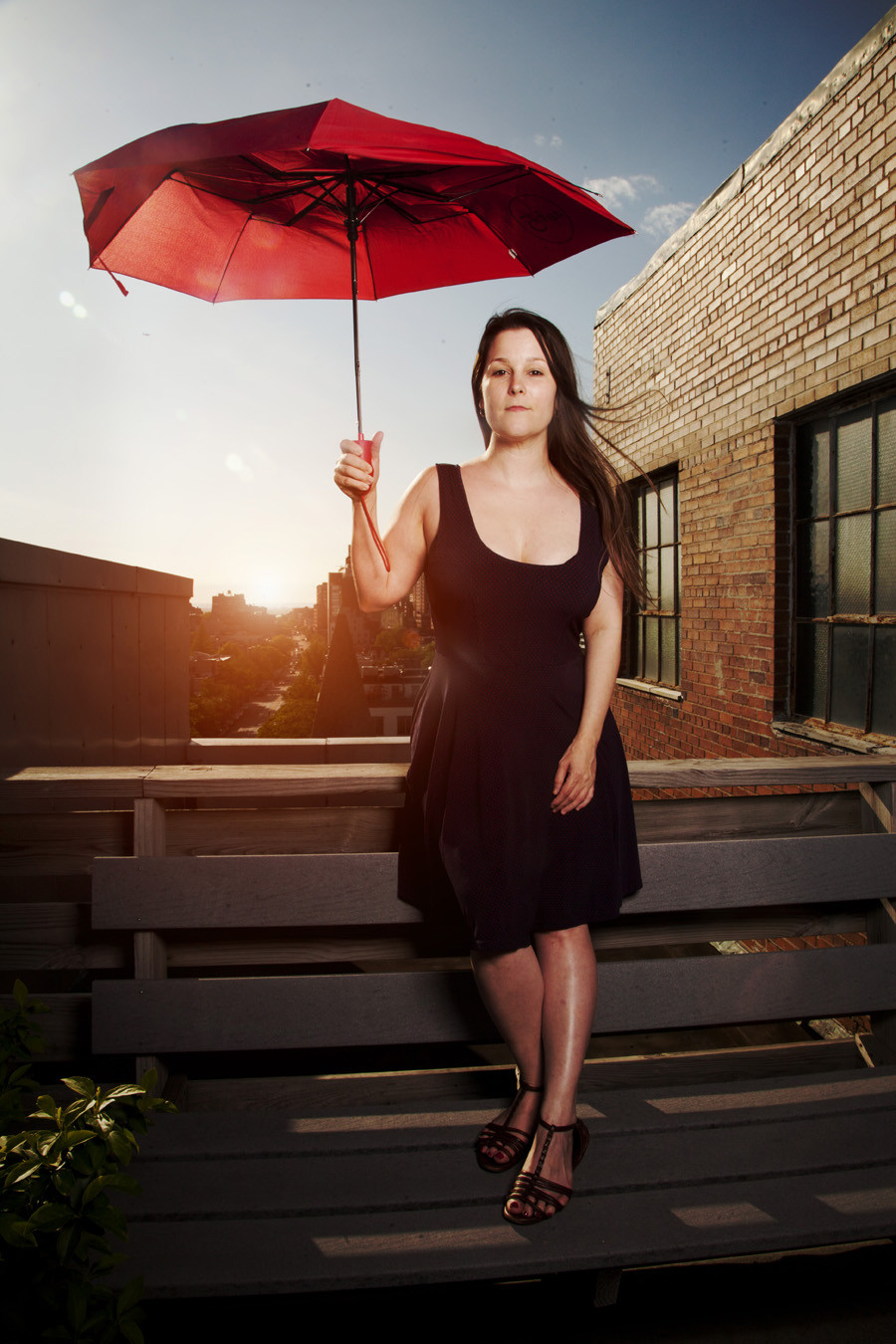 HuffPost: Why did you decide to do a year of comedy, with so many photos, rather than a few large individual portraits?

Mindy Tucker: To take one perfect photo of a person at every show or portrait session is a goal, but everyone’s story is linked together and that’s just as important. Over the years, I’ve been invited to photo a wider range of shows and performers, and the photos grew away from being about my friends and personal favorites to a project representing as wide a range of what’s happening in comedy in New York right now as possible. When Rebecca asked me to put up some photos, I pretty quickly realized I saw the work as one photo and that the context of each image was as important as a single shot. So I isolated the show at The Creek to 12 months. It’s a year in review, basically. But it goes from June of last year through the end of May this year because I didn’t want to put together an opening in December or January. I hate winter the most.

HP: Why was the mobile/web part of the show so important?

MT: Twitter is such a great medium for comedians and I’d love if people discovered a new favorite comedian through the show. So my friends Brina Jolin, Kevin Gnewikow, David Shauger put together a mini-version of the show for mobile/web that has the captions and links to everyone’s Twitter account so that you can check out jokes of the people in the photos while you’re looking at the show.

HP: What attracts you to shooting comedians?

MT: It was an accident more than an instant attraction or thought out career move. I photographed a lot of music the first few years in the city because I knew a lot of people in bands and they always needed press shots. So when I started comedy shows and portraits I thought I’d just do both. But I just had more in common with comics. I’m super aware of my surroundings and the moods of others at all times in a way that can be kind of jarring and unpleasant. Most comics have that too. A way of reading people and crowds and knowing exactly the moment they won a crowd or lost it. So there’s sort of camaraderie of raw-nerved brethren. Which was not anything I’d ever have anticipated earlier in my career.

HP: What have you learned as an artist from working with comedians?

MT: A lot. When I started, I was just a coupla years out of an MFA in Photography where it was against the law to take a photo “just because”. Everything had to be CONCEPT and defended to the death in critique. The two years in grad school for photography are the only two years since 1996 when I wasn’t shooting something almost every day of friends, family, my neighborhood, etc.

So I was coming from this place where you were supposed to know the outcome of a project before you started it. Concept and intent is important. But that way of working had left me joyless about photos.

The first shows I saw were at Rififi and Siberia and the comedians were just in the moment and trying everything. Some of it was wonderful. Some of it bombed horrifically. Epically terrible stuff. That was inspiring. It gave me some kind of permission to just try things again. Just because. And the idea in the comedy community at the time wasn’t to be terrible, obviously, but to work at it every day until the jokes were innovative as well as funny. And that mania to work it out on stage every night changed how I was working.

Instead of trying to come up with My Next Art Project™, I just decided to shoot these shows as often as I was asked. And to solve the problems of bad sight lines, people in motion in low light, the right portrait of a person… like, what is the right way to portray them in relation to who they are on stage? And to just do that, with no Big Art Project directive about it. And of course, it turned into a huge fucking art project with leitmotifs and storylines. But in a natural way, so I love it.

HP: How has your opinion on comedy changed since you began documenting it?

MT: I take it more seriously than ever before. It's one of the last remaining avenues for iconoclasts to have a wide influence. Even if a comedian isn't a political comic, the act of being truly oneself onstage itself is a political act. Saying exactly what you think is the thing so many are afraid to do.

HP: What's been your most rewarding experience as a photographer?

MT: I’m obsessed with milestones. Birthdays, weddings, first shows, last shows, welcome home parties, once a year shows, etc. I’ve gotten to photo a lot of moments like that. I’ve enjoyed a lot of great portrait sessions with people I’ve long admired. I’ve done a couple of record covers this year with people I first did headshots with five or six years ago. There are shows I’ve documented for their entire run, be it five years and ongoing or two years and now gone. To be allowed to share all that history and grow up as an artist together with so many great people, I’m grateful.

For a small taste of "One Year In New York Comedy" take a look at the slideshow below. The show opens on Saturday, August 25 at The Creek & The Cave, 10-93 Jackson Ave, Long Island City, NY. 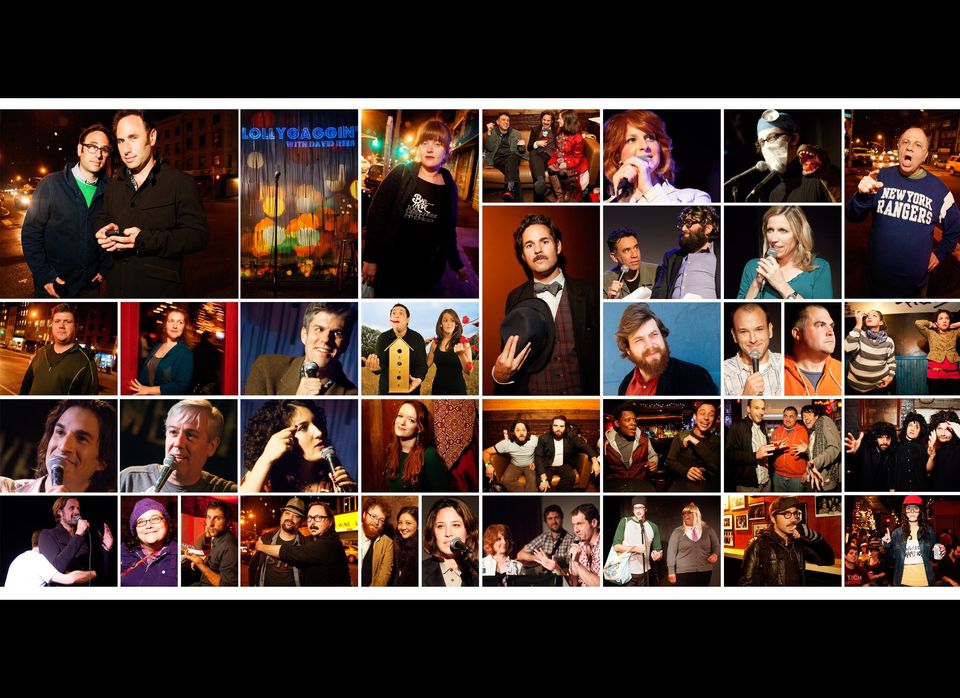