KATHMANDU - One year after the 7.8-magnitude earthquake struck Nepal, the citizens of this small Himalayan country are still trying to put their lives back together. According to the U.N., the devastating earthquake impacted an estimated 8 million people, nearly thirty percent of the country's population.

Marginalized groups of Nepali society were doubly affected by the earthquake as it exacerbated preexisting hardships characterized by poverty and a lack of access to basic services. This was particularly true for single women--widows (or "bidwha" in Nepali), unmarried women over the age of 35, or women who have divorced or separated from their husbands--who were already struggling before the quake on various fronts including financially, emotionally, politically, and socially. 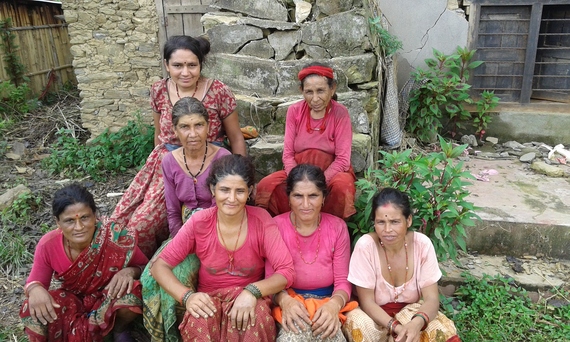 Single women survivors after the earthquake in Nepal (WHR).

Therefore after April 25, 2015, the status of single women in Nepal became even more precarious. Some lost loved ones and many of their homes were damaged or completely destroyed. According to government reports, 2.3 million people were displaced due to the earthquake, leaving women and girls in many areas susceptible to abuse, disease, human trafficking, and gender-based violence.

Despite the billions of dollars that came in after the earthquake in relief donations, the Government of Nepal has been excruciatingly slow to act leaving earthquake survivors on the ground with little or no assistance. International non-governmental organizations and local Nepali organizations have helped to fill this gap by providing temporary housing, services, and relief materials to earthquake survivors--but their reach is limited.

To mitigate the earthquake's effects for single women and women at risk, Women for Human Rights, Single Women Group (WHR) with the support of Oxfam established eight women's centers at the Village Development Committee (VDC) level in the hardest-hit districts of Nepal. These centers provide single women and women at risk access to services, relief materials, and counseling. They also offer public awareness trainings to educate local communities on issues such as legal awareness, gender-based violence, and WASH and sanitation.

During a field visit last month, we travelled to these centers in six earthquake-affected districts to interview single women. The devastation from the earthquake was overwhelming even one year later. All of the women we spoke to were still living in temporary shelters mostly made out of corrugated galvanized iron (CGI), which does not adequately protect them from cold weather, heavy winds, or rain during the monsoon season. As homes collapsed in the earthquake many household goods, livestock, and food supplies were ruined leaving many women and their families with literally nothing. 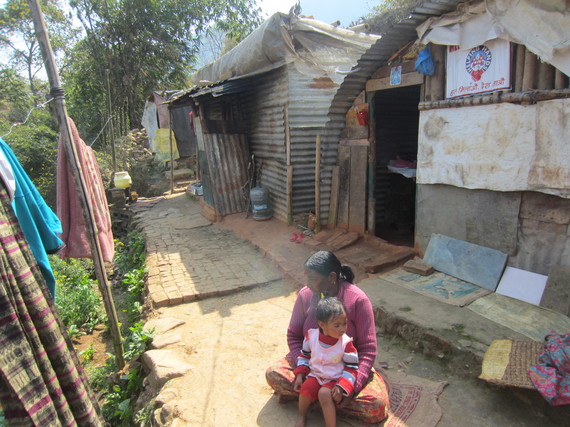 Kanchhi Sunar and her granddaughter outside their temporary shelter in Machhegaun VDC, Kathmandu District (WHR).

That is what happened to Kanchhi Sunar, a 55-year-old widow we spoke to who lives in Machhegaun VDC of Kathmandu District. Kanchhi's struggle is threefold: she is a single woman, she is from a low caste, and she is a victim of the earthquake. Her husband died twelve years ago, leaving her alone to raise six children. Kanchhi and her family used to live in a house--the only thing she owned in the world. Now after the earthquake, her entire life has been turned upside down. Kanchhi recalled the day of April 25, 2015:

I had gone to visit Dhulikhel on a pilgrimage. My daughter had called the night before asking how I was. Then, the next day when I was travelling, the earthquake struck. I was terrified for my family's safety, so I returned home as soon as I could. Once I got home, that is when I learned that my only daughter had died.

Kanchhi was in utter shock. Her daughter had been working in Kathmandu at the United World Trade Center and was crushed by one of the pillars as the building collapsed. Her daughter was only twenty two years old. Now, the thought of conducting the traditional puja ceremony one year after her daughter's death brings tears to Kanchhi's eyes. Although she has received counseling from the Machhegaun women's center, grieving for her daughter's death has been a slow and painful process.

Like so many others, Kanchhi's home was totally destroyed in the earthquake. WHR helped to create a temporary shelter for her family, where she and her two youngest sons and grandchildren now live. Kanchhi's daughter had been the primary breadwinner for their family, so money has been tight since the earthquake. As in Kanchhi's situation, entrenched patriarchal gender norms in Nepal prevent many women from pursuing higher education or a career path other than agriculture or manual labor--especially in the rural areas. Therefore once a woman's husband dies, she is often left uneducated and unemployed with limited livelihood skills. Moreover, traditionally in Hindu society if a woman's husband dies she is considered unlucky and blamed for his death. This was the case for Parvati Neupani, a 35-year-old widow with three children who lives in Tupche VDC of Nuwakot District. During the earthquake, her three-year-old son was upstairs in their two-story home when it collapsed. He was buried under the rubble, so her husband went inside to save him. Tragically, her husband was crushed under the door and killed, but her son was rescued eight hours later. 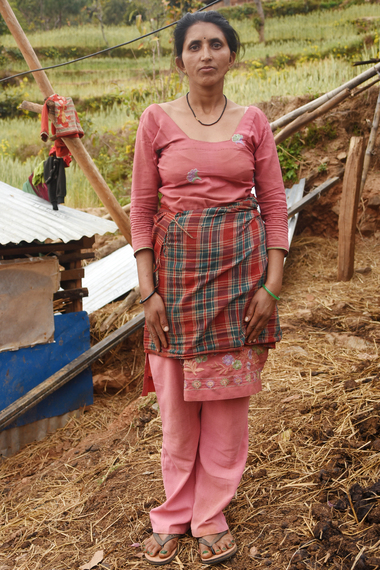 Parvati Neupani outside her home in Tupche VDC, Nuwakot District (WHR). After her husband's death and the loss of her home, Parvati was emotionally numb, and depressed for months. With the support of counseling from the Tupche women's center, Parvati has moved past the initial shock of her husband's death and the loss of her home. She is now concentrating on how to provide for her three children and hopes to support their education. Parvati said the most difficult challenge this past year has been facing mistreatment from the local community. In her village, Parvati's family shares a water pump with seven other families. However, after becoming a single woman the community shunned Parvati from using the tap. Now she has to wake up before all of the other neighbors to fetch water for her family.

"People said that my husband died because I am unlucky and that I was responsible," Parvati said. "Still whenever I speak to a man in public, people say things about me and question my character."

This type of discrimination against single women is common amongst the rural areas of Nepal. That is why the new women's centers have become a safe space for single women to share their problems and to create a collective voice within society. The centers' public awareness programs also spark dialogue within local communities that provides an opportunity to debunk prevailing notions about single women at the grassroots level.

"The public awareness programs have been especially effective because single women, men, and married women can participate," said Sannani Silwal, paracounsellor at the Dhading Salyantar women's center. "So when single women share their experiences and how they felt when the community mistreated them, it is a process of self-actualization and realization for the other community members."

One specific case of self-actualization amongst the single women we spoke to was Bimala Nepali. She is a young widow at the age of 28 living in Salyantar VDC of Dhading District. Her husband died two years ago leaving her with three young daughters. After his death, Bimala's neighbors said that she was unlucky and responsible for his misfortune. 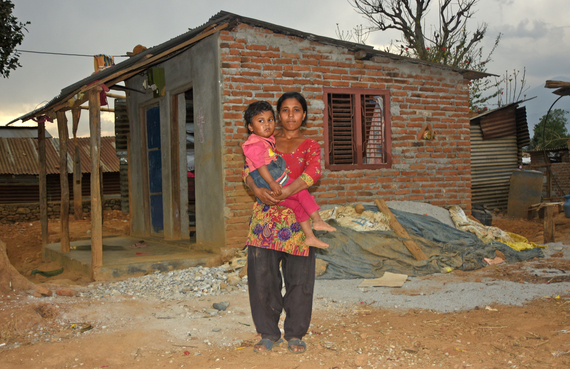 Bimala with her youngest daughter outside the one room where they now live in Salyantar VDC, Dhading District (WHR).As a low caste single woman, Bimala began to internalize this notion. "Maybe I'm not good enough," she wondered. "Maybe I am to blame."

At the time of the earthquake, Bimala was in church with her children. When she returned home, she found that her house had almost completely collapsed, but one room made of brick was still partially standing. Her brother helped to repair the room by adding pieces of CGI to the walls and roof. Bimala and her children still live in this small room, which feels a bit crowded with a bed, chest of clothing, two small tables, a bench, two chairs, and a sewing machine. After her husband's death, Bimala stayed at home and did not talk to many people in the community. So when she heard about the new women's center in Salyantar she decided to attend one of its programs. There, she realized the importance of sharing her problems with others and gained enough confidence to openly tell her story. "I began to recognize that my neighbors were wrong," said Bimala. "I was not responsible for my husband's death."

These stories of Kanchhi, Parvati, and Bimala are just three of thousands of single women who were impacted by the earthquake in Nepal. One year on, people are still living in temporary shelters with no resources to rebuild permanent homes. The women's centers have provided crucial support for women in these local communities, but that is just the beginning. Much more assistance is needed for the single women and people of Nepal on their long road to recovery--a process that will continue for years to come. Donate to Women for Human Rights, Single Women Group and support post-earthquake recovery for single women in Nepal.

Sociology PhD Student at the University of Colorado Boulder