In early 2013, the wounds in Newtown, Connecticut, were still raw. Hearts yearned to make sense of the terrible tragedy that had befallen their community, and civic and church leaders looked to each other for ways to speed emotional recovery. In response, the Newtown Cultural Arts Commission created HealingNewtown, a nonprofit arts organization that provides seminars and performances as an outlet for those in pain.

Inspired by this gesture, Sharon Pearson, a Christian formation expert at a publishing company, decided to contact her home parish in the Episcopal Diocese of Connecticut to see what the church could do to help.

So Pearson reached out to Roger Hutchison, an artist, writer and Episcopal lay leader in South Carolina, to help facilitate an art workshop in Newtown. Hutchison had written a book about the innovative group activity he uses with parishioners to blend art therapy with mindful spiritual practice; it's called The Painting Table, and to Pearson, it sounded like a perfect fit for Newtown. At The Painting Table, participants gather and share a table and paper and art supplies. They're free to paint anything they want - even the table itself - and use their hands as brushes. Folks talk as much or as little as they want to. No one worries over the mess.

"The end result of The Painting Table is not the painting that is created," said Hutchison, who conducted his workshop at Trinity Episcopal Church in Newtown last spring and will return to Connecticut as a guest of HealingNewtown in June 2014 for another session. "It is the conversation, sharing, and listening that takes place around the table."

The Painting Table allowed the citizens of Newtown to explore grief and hope - without boundaries.

"It is one mother comforting another mother as they both grieve for their friend who lost a child," Hutchison says. "The Painting Table is also about the conversation I had with a young mother who told me that she feels guilty sometimes that she still has her children. Or the mother who told me how her first grader had climbed up into her lap and sobbed when he learned that his friend was not going to be there when he returned to school."

In his book, The Painting Table, Hutchison invites readers to journal and share their stories of healing. In his own story, Hutchison lovingly describes how he got the idea for The Painting Table activity from his grandmother's kitchen table, a place where he spent much time: he equates childhood memories of preparing colorful vegetables such as summer squash, tomatoes and okra with the vibrant pigments he uses in his work as an artist. The power of surrounding oneself with color is underestimated, he said.

"I recently had an experience while visiting the Museum of Modern Art in NYC. I was sitting on the floor looking at these wondrous paintings and at the same time feeling broken by the pain a family member was going through. All around me were the vivid colors, passion, shapes, sounds, and forms. From Picasso to Cy Twombly, René Magritte to Georgia O'Keeffe, I found myself awash in the colors of hope. When hurt is shared - even if it is with paints/canvas, healing can begin," Hutchinson said.

Hutchison witnessed this healing first hand at The Painting Table in Newtown, too.

"A third-grade girl told me she'd had a really bad day," he said. "Her painting was dark and frantic. I listened to her for a little while - then encouraged her to paint another one. The second painting was a bit more colorful. She took her two paintings and smashed them together. When she pulled them apart, the darkness had lifted... and she smiled. That's when I saw light and love in her face." 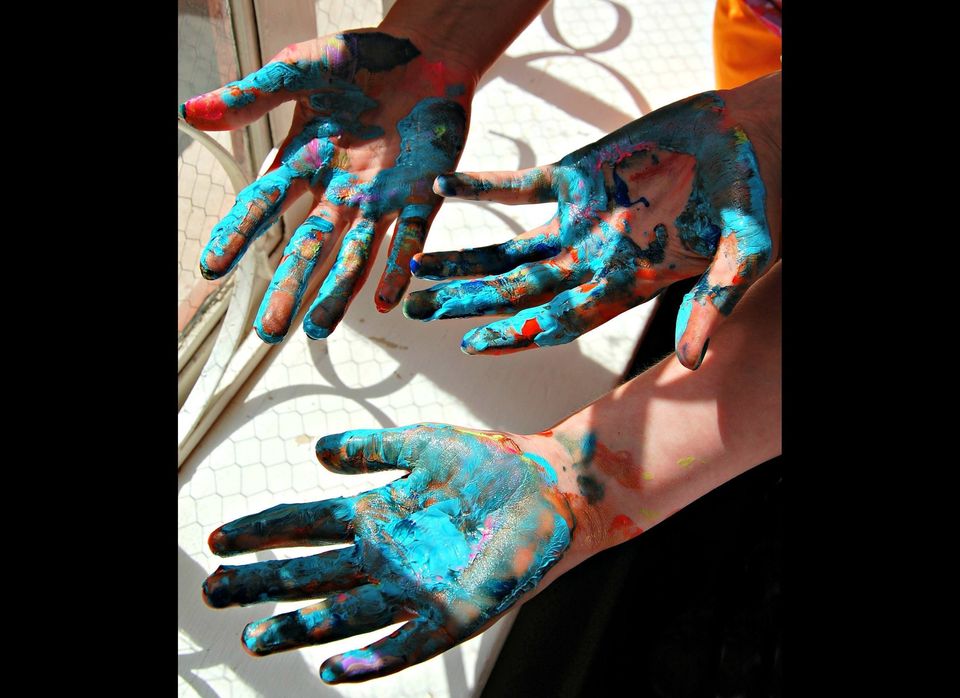