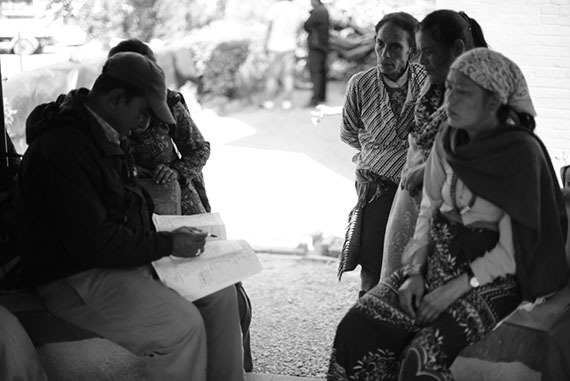 Like so many others in Nepal, Butti Gyalbo Taamangni suffered heartbreak after the devastating twin earthquakes that struck the Himalayan country last April, which killed over 8,000 people and displaced almost 3 million more. She lost her husband during the first quake, a loss compounded by two other critical problems. He was the only wage-earner in the family, so her income dried up immediately; and she was undocumented, so was not able to apply for any recovery support from the government.

At the Accountability Lab and Local Interventions Group, we had already developed youth networks across Nepal before the earthquake. So when it struck, we were determined to make sure that they were mobilized immediately to support the victims. The day after the disaster, we brought these young volunteers together into what we called Mobile Citizen Helpdesks. Initially, these groups helped to solve critical problems and ensure people like Butti received the care they needed. In her case, she was not able to write, so they helped her fill in the necessary forms to obtain a citizenship card. With that Butti was able to access disaster assistance from the government to rebuild her home and start a business. In the first few weeks after the disaster, our volunteers solved over 500 of these kinds of problems: reuniting families, supporting health facilities, and coordinating aid.

We were also determined to make sure that unlike many other disaster recovery processes, the voices of citizens like Butti were truly heard as part of the international response. After all, it is to victims like her that all efforts should be accountable. So our helpdesk teams began to systematically survey communities on their needs. These perception surveys—and the rumor tracking tools we paired with them—have become a critical input for the $4.4 billion recovery program.

Over the past nine months—with the help of key supporters like Humanity United, Google, the OpenGov Hub, DfID, Global Giving, and Internews—we've reached over 795 communities and more than 60,000 citizens in 14 districts. The reports our volunteers create are full of useful data from the ground concerning issues such as compensation for victims, trust in government, and corruption in rebuilding. These are integrated into the coordination meeting led by the UN which has allowed the big agencies like Oxfam and World Vision to adapt their programming, making their work more effective in the places it has been needed most.

All of this has not been without its challenges. One big problem has been communicating back to communities about how the information they give us is being used. Making sure this happens is important to close the loop on our process and build trust in the idea of citizen feedback. To address this, we now host monthly community meetings with citizens in all the districts to let them know how the government and donors are responding to their concerns. With catalytic support from the Echoing Green collaboration fund, we publicize these meetings by broadcasting public service announcements through local FM radio stations (the best way to reach people in remote areas).

The impact has been impressive. Meetings are well attended, often with hundreds of people showing up to listen in; and we are seeing noticeable positive changes in the satisfaction level of victims and their families with the support they are receiving. Over time, we hope that this kind of feedback process will become institutionalized so that communities can continue to push for service delivery and advocate for their rights. We are also now working to codify what we've done in Nepal as part of a Disaster Accountability Toolkit which can be used by other organizations after similar disasters elsewhere.

As the anniversary of the earthquakes approaches this month, progress is slowly being made in Nepal. Citizens like Butti are beginning to rebuild their lives and build systems to hold people in power accountable for the aid flowing into the country. We'll continue to support them until the job is done.

This article is part of a series that showcases emerging leaders' voices on a variety of issues related to social change. The opinions expressed in this article belong to the authors. Echoing Green provides these leaders and social entrepreneurs with a two-year Fellowship, seed-stage funding, and strategic support. Learn more: echoinggreen.org.