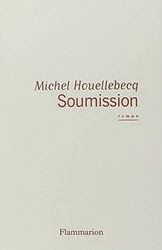 There is a wonderful description of Michel Houellebecq in Anthony Daniels' New Criterion essay ("France's Submission,'"2015). Firstly here is Daniels on the writer's credo:

"Houellebecq is a writer with 'a single underlying theme: the emptiness of human existence in a consumer society devoid of religious belief, political project, or cultural continuity in which, moreover, thanks to material abundance and social security, there is no real struggle for existence that might give meaning to the life of millions."

Put another away Houellebecq might be seen as the Zola of his generation. He is a determinist who disparages enlightenment notions which only detract from the tragedy of the inevitable. One might say that the anti-Christs in Houellebecq are the inveterate optimists, for instance 60's utopians, who believe in the notion of human freedom. They remain paradoxically unenlightened enough not to realize the extent to which, like a stampeding mob, they trample on the needs of others as they seek to achieve their own private nirvanas. Daniels' essay comes on the heels of the publication of Houellebecq's latest novel in which as Daniels states "a Muslim is elected President of France." Houellebecq had at one point been charged in France when he publically stated Islam is "the most stupid religion" ("Calling Islam stupid lands author in court," The Guardian, 9/17/02) Uncannily, his latest novel was released on January 7, the day of the Charlie Hebdo massacre. But here is Daniels' description of the author:

"Houellebecq's physical appearance as relayed in the press suggests that he fully inhabits the world he describes. He looks like a man who has crawled out of a giant ashtray after a prolonged alcoholic binge in clothes that have not been washed for weeks."

Houellebecq would shudd"er but there is a comparison to be made between him and Herbert Marcuse, the Frankfurt school Berkeley philosopher who coined the term "repressive desublimation" in his famous tome One-Dimensional Man: Studies in the Ideology of Advanced Industrial Society. The two have different agendas, but they might offer the same diagnosis about dark side of pleasure seeking. Houllebecq is now a film star too. He appears in The Kidnapping of Michel Houllebecq which just opened at Film Forum.