The federation of academics Kano Suryoyo in Germany had invited us to a multi-day seminar on the genocide of Christians by the Ottoman Empire in 1915. They also wanted to discuss the similarities between the genocide and what is happening to Christians, Yazidis and others in Syria and Iraq today, one hundred years later. One of the speakers was Barakat Issa, a Yazidi journalist who witnessed the war crimes against the Yazidis and others in August 2014.

When it was his turn to speak, I watched him bow his head as you do when saying a prayer. He trembled his way to the podium. He began by saying something like: "I'm an eyewitness, I wish I did not have any eyes or that I had not witnessed anything." Then began to unfold the most brutal of atrocities -- unimaginable to the average person. Hundreds of thousands of Yazidis, among them Christians and other minorities, forced up on the Sinjar Mountains in northern Iraq. Amid the warmest period of the year. Without water. Without food. Without medicine. Then came the terrorists who began to divide the women and men. 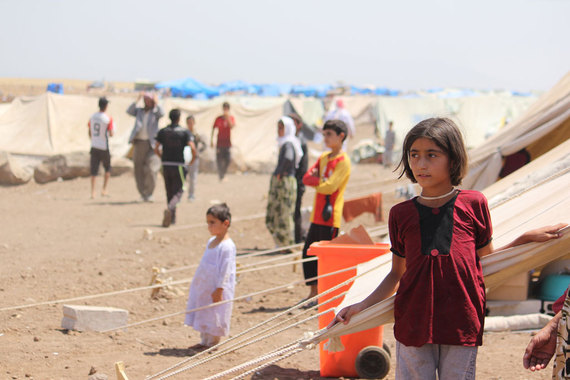 When Issa spoke it was as if many in the audience got nervous twitches. We didn't really know what to do with ourselves, our bodies were beginning to be hard to control and it became difficult to sit still. He himself was shaking more and more. He himself had lost family members, but finally managed to escape with one daughter and four other men; amongst the six of them, they had one slice of bread to eat.

We were at the University of Paderborn in Germany listening to these speeches, yet to us at that moment the outside world was nonexistent. Suddenly we were interrupted by someone shouting, this was followed by similar shouts from a few others- all uttering the same words, I could not believe my ears. The shouts were coming from a few gentlemen in suits and nice haircuts- they were yelling that 'no genocide had occurred had occurred in 1915' and saying that saying that genocides were ongoing was an exaggeration only to defame Muslims in Germany.

They were soon thrown out. I thought it was the wrong decision that we should have been allowed to discuss with them.

The fact that the UN inquiry into war crimes against Yazidis has come to the conclusion that what happened in 2014 in Iraq was a genocide is a first step toward restitution. We are not crazy; we have neither lied nor exaggerated. In the struggle for recognition of the genocide, we have many times been ridiculed, threatened and hated.

When the news of the UN report came to me, I called a Yeazidi asylum seeker who lives in an accommodation in central Sweden. She has lost most of her family, they were slaughtered, and she has many friends and relatives who were kidnapped by ISIS and are being held captive as sex slaves. I had to, through an interpreter, several times repeat what the UN had concluded. She hung up the phone. I called again. She had dropped the phone on the floor.

Now the United Nations has somewhere to start from, it is nearly impossible for the Security Council to recognize a genocide but not move towards any sort of action. A nation that is considered to have been exposed to genocide must now be protected; this is specifically stated in the UN constitution. The woman on the phone rejoices when I tell her what this might mean. The report revealed that many sex slaves are being auctioned off. Before we hang up, she says that her cousin is one of those that have been auctioned off online.

At a dinner I asked Barakat Issa what could give him some sort of peace.

"The truth, nothing but the truth."

His people has been subjected to repeated genocide, finally, they have been heard. Though the price was too high.

The United Nations will now also investigate the genocide of Assyrians/Syriacs/Chaldeans, Armenians and other Christians. They too have paid far too high a price.

Translated from Swedish by Daniela Barhanna