Messages from the Onion's Twitter and Facebook feeds prompted questions about whether the accounts had been hacked by the Syrian Electronic Army on Monday. The hacker group claimed responsibility for the posts.

"The Syrian Electronic Army Was Here" appeared on the Onion's Facebook page on Monday morning. Similar messages appeared on the Facebook and Twitter feeds for Onion Sports, and were removed. 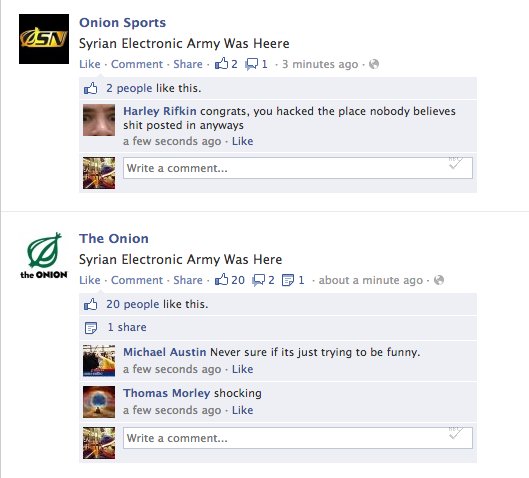 The Onion later acknowledged the attack in a satirical piece.

Onion Politics, an account which has been inactive since February, had also tweeted Monday morning, "Syrian Electronic Army Was Heere," preceded by a message about Israel. Those messages were taken down.

E Hacking News reported that the Syrian Electronic Army tweeted a screenshot showing that it had accessed the Onion's accounts.

That message was followed more questionable tweets from @TheOnion about Syria and the Middle East, which were accompanied by broken links. One of them read:

We only wish this one was a joke, but this is what we have to live through in #Syria. twitter.com/TheOnion/statu… 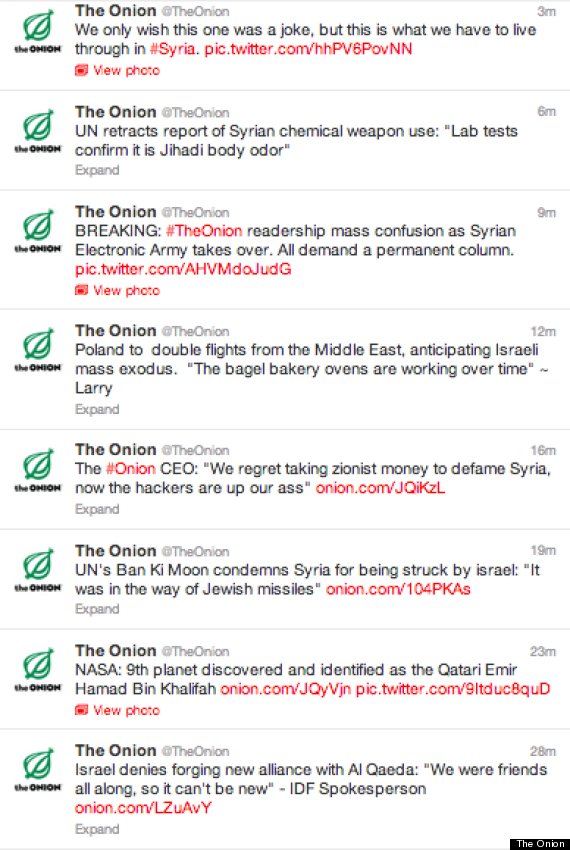 The posts were later removed.

The Syrian Electronic Army, which supports President Bashar al-Assad, has claimed responsibility for hacking several news organizations in recent months. It was reportedly responsible for the AP's fake tweet in April saying that the White House had been attacked and President Obama was injured. The group also reportedly hacked accounts for CBS News, including Twitter feeds for "60 Minutes" and "48 Hours."

Fooled By "The Onion"