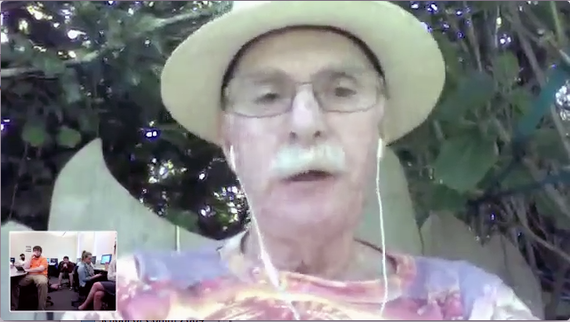 Popular social networks have overwhelmed many of the early online communities, but one of the first thinkers and writers remains "hopeful." My social media students asked Howard Rheingold about the state of current online communities.

Rheingold was asked about the Well and the Whole Earth Catalog from the 1990s, and where to find the counter-cultural spirit today. "I think it goes to the heart of a critical uncertainty, a challenge for you and your generation about the future of the web," Rheingold said.

By participating and using whatever social media come along, Rheingold contends, online creation is a political and economic force beyond the large sites:

Now we've got Google and Amazon and Facebook who are really trying to make their private domains on the web. And those are useful. I use all of them, but I think it's important for people to use WordPress, use Tumblr, use Twitter... to create and connect on your own, so that we have a healthy ratio of people who are creators, as well as consumers of culture.

"I don't think it would be healthy for us as individuals, in terms of the richness of our lives, nor would it be helpful for democracy or for the cost of online services, if we give up this kind of user created web," Rheingold said.

Think about Ralph Waldo Emerson's idea of self-reliance as "an American trait for a long time," Rheingold said via Skype video from his Mill Valley garden. "Let's do it ourselves -- find the tools and teach each other and do it."

What remains uncertain, however, is whether or not ordinary people are willing to take the time and effort to go beyond traditional media consumption and embrace the effort it takes to be creative.

At the intersection of technology and learning, Rheingold has participated in online educational communities, but he notes, for example, that there also is "a lot of nasty stuff going on" in some Twitter communities. "It's a reflection of human life," he says. "There are creative people, and community-minded people, and nasty people in the real world, and Twitter enables them to connect with each other, magnify with each other."

I think that the technology has raced ahead of the literacy about how to use it. And the educational institutions have lagged behind in teaching people how to use it. So, it's really up to ...those of you who appreciate how to use Twitter and get into to it, help your friends understand how that works... how you can build personal learning networks, how you can give material out to others freely and they will reciprocate. And everything you put out will come back to you ten times.

It would be a shame, Rheingold says, if user Twitter tools, such as hashtags and re-tweets were replaced in a company effort to grow.

Social media literacy begins in the schools with clear ideas about how to use technology to achieve specific educational purposes. "The web is all about peer learning and peer discussion," Rheingold says.

He prefers the use of a forum instead a Facebook group in which the most recent posts are at the top, but Facebook groups are also useful "to have classroom discussions that carry on a culture of conversation ...after class, between classes for the students to form and maintain a community and pursue questions together."

If the goal is for young people to make good choices; Rheingold thinks this is not taught by taking away social media in the schools through online filtering.

It is not a simple issue for educators of whether or not to block a tool. Instead, online communities require structured and purposeful collaboration. Rheingold is interested in experiments that create inner and outer discussion circles on Twitter organized by an online moderator.

The early web featured interest groups. While these still exist, the larger web is dominated by more general social networking.

"I'm hoping that discourse will kind of reawaken the people's appetite for those kind of group-forming conversations in that good forums enable many people to have many conversations over a length of time," Rheingold said.

Those conversations may lead to relationships and caring communities that jump from online to face-to-face interaction. "Every conversational group does not need to become that kind of tight-knit community where people care about each other, but I think it's important that that continue to exist," Rheingold added, such as with cancer patient online communities.

Social media can be positive or negative, and Rheingold urges students to focus on context, whether it be interpersonal or political. "We're really at a time when people are trying to figure out how to make these tools work to their benefit; the answer to that question, I think, has not really come out yet."