About five years ago, I abruptly ended a 10 year relationship with a man I loved and trusted. Being 54 at the time made it that much harder as the prospect of finding someone else I was so compatible with at my age seemed grim at best.

I left him because I discovered that he had filled out dating profiles on every imaginable dating genre available. There were kinky ones, Christian ones, farming ones, pornographic ones, college ones and well, you get the gist. You can imagine my horror to find that this man I trusted was actually dating while living with me! He actually met a few women personally which is a definite deal breaker but even filling out a profile, responding to invitations to chat and continuing conversations about meeting up or, in some cases, just jumping right into online intimacy is the same thing. It's cheating.

Before leaving, I did go in and change all of his profile settings. He was now interested in men only, very elderly people and weight lifters; anything that was the opposite of what he originally filled in. I can only imagine the responses he got. Oh, I also signed him up via phone and email for several time sharing opportunities and sent requests to real estate agents to contact him because he was interested in selling his house. Also, I may or may not have shared his information with several health insurance agents requesting phone calls about their incredible, low cost programs.

He knew I had done it but couldn't confront me for by doing so, he was admitting guilt. Silly man, never leave your pages open! It was obviously killing him not being able to confront me about my discovery but what could he possibly say? "Thanks for changing my dating profiles, now you've gone and screwed everything up!" He had to suffer silently. I enjoyed it.

I moved back to the area where I grew up in and now live with my brother. I have not dated since. My married friends, saddened I was now alone, were determined to find me the perfect man. "Fill out a profile on a dating site!" they said. "It will be fun!" they said. It was not fun.

After several glasses of wine and if memory serves me correctly, some sort of coven-like ceremonial dancing involving moonlight, twirling around in flowy gown attire (picture Stevie Nicks), a bubbling cauldron (and there are some fuzzy flashbacks of some sort of cult sisterhood blood letting) I agreed to join a dating site. I truly couldn't remember nor could I discern if the stain on my flowy attire was wine or diluted blood. I never investigated further, some things are better left unknown (your partner dating while in a supposedly committed relationship with you does NOT fall into this category, let there be no confusion).

I took extra care to fill out my profile and luckily, I had prior experience under my belt from changing all the settings on my ex's numerous dating sites. I thought that if I were really going to try this, I should be very honest in my answers so as not to waste my time or my "one and only-s." Why I assumed others did the same, I don't know! I am going to pull the age card on this one... again.

I was quite flattered when I got my first "flirt" within minutes of posting my profile. How exciting! How special I must be. My ego deflated rapidly when my notifications started dinging furiously, sounding a bit like a child banging on a xylophone. I realized after opening the flirts and looking over my potential suitors that I must have signed up on some sort of prison dating site and if that weren't frightening enough, after perusing a few profiles and their answers to the same questions I had spent hours toiling over, realized it must have been from the psychiatric ward housing the most heinous offenders.

The scrawl that was legible seemed to contain small phrases such as, "sumone who is pretie" or "i like lots afekshun." Gasp! My picture, and a lovely one which took me many hours, an entire bottle of Pinot Noir, the good $12 stuff, to select was now released into the vast unknown. To add to my already shaken sense of security, I found that most of these wonderful candidates lived within miles of me. Lucky me! Could they find me? No address was on the profile, so surely not. Was I in danger? What if I ran into 'SexmusheenSam' while shopping at Safeway? What would I do? Did I now have to travel about incognito? I know I have a Suzanne Sommers wig here somewhere, should I dig through all those must have midnight clearance sale items purchased from HSN I couldn't live without and brush and style it? What if I looked horrible in it? Could I go out looking unfashionable when I spend a good deal of time watching what I eat and exercising so I still manage to look fairly fetching?

One problem only led me to endless others and I was now completely overwhelmed at the thought of having 'Hum-donger' tapping me on my shoulder in a parking lot, displaying his three crooked, yellow teeth in a maniacal twisted grin saying, "I no yew, yer my favrit lady on that thar daytin web!" Once recovered from breath that I'm sure could only be described as vomitus epicicus, what would I say? I can't be rude, particularly when representing Suzanne Somers and her Fun Flirty Fashion Fiesta Pixie Cut All Natural Looking Wiglet! What if I ran into my ex in his pursuit for "any woman not me?" My brain was actually exploding.

Scenarios like this plagued me and my 44 Magnum at night while buried under the covers. I had finally reached the height of paranoia and launched out of bed, opened my computer and deleted my profile post haste. Enough was enough. I honestly did not feel much better, who knows whose hands (shudder) my profile was in. I had no control over that but at least it wouldn't still be ricocheting out there in Psychoville.

Things have settled down now, my friends no longer worry that I am alone because they see I rather enjoy it, in fact, I think some are conspiring to abandon their husband's so they, too, can experience life on the freedom train. I like me. I'm fun. I go out when I want, where I want and answer to no one (well, my sons believe I am completely senile so they check on me hourly which is highly annoying!). If I happen to meet a nice man, so be it. I will tell you that if I ever get to the point where I am at his home, I will check his computer while he is busy attending to whatever psychotic habit I'm sure he has not revealed to me yet. Skeptical? Very! I still believe there are good men out there but for me, a dating site is not where I want to meet one.

All in all, life in my 50s is great. Well, the wig is scratchy and the Jackie O sunglasses and chin tie scarf can be difficult to pull off at times. But I manage quite nicely.

Online Dating? Thanks, But No Thanks
Dating And Bankruptcy 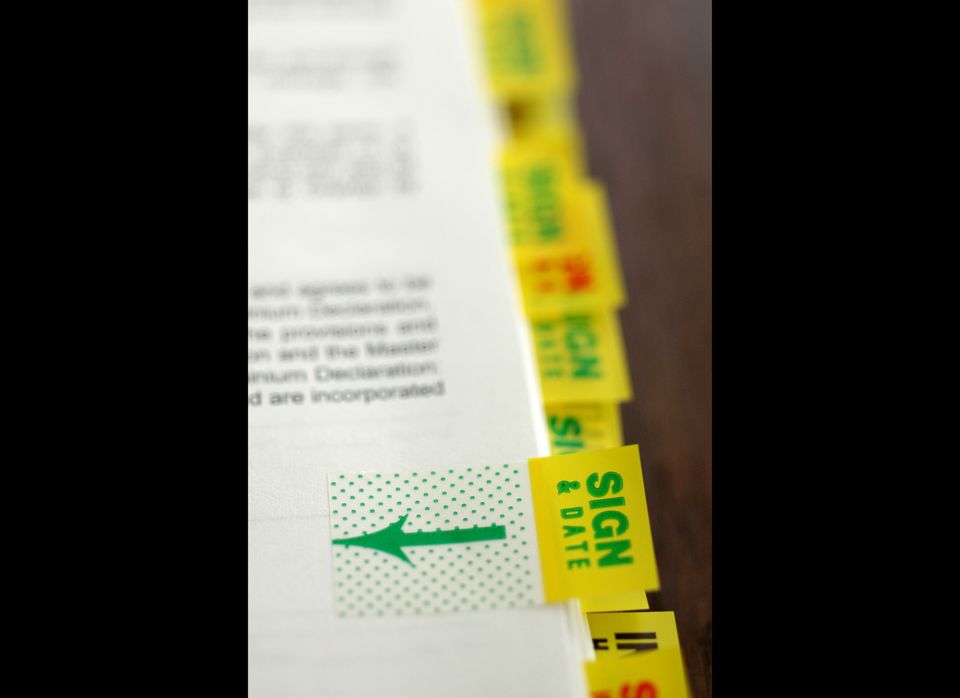 1 / 5
Don't Co-Sign A Loan
Not a loan to refinance the underwater house, not a car loan because he or she, after all, can't keep taking buses to get around. Your legal obligation to repay that loan may outlive the relationship. By co-signing a loan, you are also tying up your own credit -- something that can easily come back to haunt you. You won't like it when you try to get a mortgage for a retirement condo in Florida but are told that you already have too much credit extended because of the boat loan your former beau or belle talked you into co-signing.
Alamy