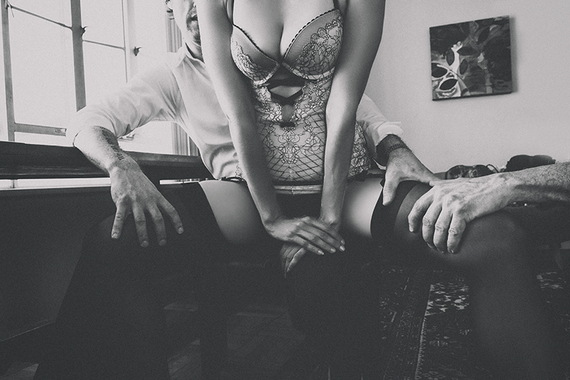 So you're a single midlife woman and you care about sex? Then say so in your online dating profile.

And no, I'm not just talking about women who are looking for casual fun, although that's a perfectly acceptable choice. I'm talking about any sexually charged woman who believes that good sex is a vital component of a romantic relationship and doesn't want to settle for anything less.

My opinion about sexual transparency is practically heresy in the heterosexual dating advice world, where women are routinely admonished for letting it be known that they like sex. Last week I read a piece written by a dating coach for the over-50 set. While I agreed with most of her advice, I bristled as she urged women to "leave sex out of your profile" because "it gives men the wrong impression and encourages those you aren't interested in."

My guess is that 99.9% of dating coaches would preach the same thing: if you appear sexual, men won't respect you. AND you will attract men who are incapable of seeing women as anything more than penis receptacles. This kind of reductionist thinking is horribly unfair to both sexes and, IMHO, is one reason men and women don't trust each other. Women are socialized to believe that men are jerks and men resent women scrutinizing them for covert jerkiness.

Where I do agree with dating coaches is on the importance of marketing. You have one shot -- a fleeting shot, given the cyber candy store otherwise known as online dating -- to make yourself stand out. But you don't want to stand out to everyone; you just want to stand out to the type of person who shares your values -- sexual and otherwise.

If you want to attract someone who values sex as much as you, you need to do the very thing you've been taught not to do: be transparent. I don't mean that you should post wet t-shirt photos and boast of your deep-throating skills. And I certainly don't mean that you should play down your intelligence, since the kind of man you most likely want to attract will also be turned on by your mind. But I do mean that if you miss having hot morning sex before your hot morning coffee, then go ahead and say that.

Here are five reasons why you shouldn't play coy about sex in your online dating profile -- and why you should play it up instead.

Are men really such savages that they can't value a woman for more than the sum of her lady parts? Is it so hard to believe that many men are as turned on by a woman's intelligence as they are by her body? Once you decide that all men are closet douchebags, this mindset will inform your interactions with them.

How would you feel if the men you were dating approached you with cynicism and disdain and made you jump through hoops before they'd have sex with you? If they telegraphed their distrust of all women and kept you guessing whether or not they were truly interested? If you're like me, you'd be insulted, turned off, and ready to swipe left on Tinder.

It's not a woman's job to police a man's sexual behavior. It's just not. Telling a woman that she has to present some sanitized version of femininity in order to find a healthy relationship is like telling her she shouldn't wear short skirts if she doesn't want to be raped.

Men need to be held accountable for their own behavior, and if women aren't putting out till Date #10 for the sole reason that a dating coach told them 10 is the magic number, or if they're assiduously avoiding the topic of sex, or if they're afraid to show up to dinner in a clingy blouse because it will signal to their date that they're "only good for one thing," then men don't have to own their choices. Because women are essentially telling them they can't.

Bad things happen when adults aren't up front about their sexual and relationship intentions. Women may pretend to be less sexual than they are for fear of not being taken seriously. They might also engage in hard-to-get games to "keep men interested."

Men often pretend they want a relationship in order to get sex (because they're taught they can't say they want sex), spinning dreams of a rosy-hued future which will vanish once they realize the woman they've been making promises to expects them to be kept. Both genders invite bad behavior from each other in these scenarios and emerge with yet more "proof" that "women are crazy" and "men are assholes."

4. It won't keep you from falling for a douchebag.

A great guy didn't suddenly morph into a douchebag because you talked about sex in your online profile; he was already a douchebag when he read it. You could have the most conventionally appropriate profile around and still attract a douchebag.

If it's okay to talk about your job, your boat, your dog, and your kids, why then, can't you talk about sex? My marriage ended for many reasons, but sexual incompatibility was at the top of the list. The last thing I want, at 51, is another relationship in which I can't be myself sexually -- or to spend time with someone hoping that the sex will get better, then being disappointed when it doesn't.

So why not be open about all this in my profile? If a grown man is going to lose respect for me because I'm transparent about sex, then he isn't someone I want to be with anyway. And, frankly, he isn't a grown-up.

Bottom line? If you want to write a sexually transparent profile, go for it. The guy (or guys) you're meant to be with will appreciate it and you don't need to be concerned about the other ones anyway. The danger with conventional dating advice -- or any black-and-white perspective on love and sex -- is that it makes women second-guess themselves and believe there's only one right way to be.

When the only right way to be is the way that feels right for you.

Most Common Sex Myths About Boomers