According to the Centers for Disease Control and Prevention, more people in America overdose from prescription drugs than from heroin and cocaine combined. The fact that prescription drugs can be easily purchased from online pharmacies without a doctor's prescription is a major concern, especially for parents of teenagers.

John Horton, the founder of LegitScript and the person who policed the industry for the White for five years, said in a recent interview that research shows 97 percent of Internet pharmacies are not operating legitimately and most of those do not require a prescription at all.

Leave a door open, and we know teens and drug dealers will find a way in -- either online or off.

Digital Citizens Alliance (DCA) is part of a proactive community that is working diligently to not only make the Internet providers accountable, but to educate parents and our communities about the risks of illegal sites lurking in cyberspace. Recently they have been delving into rogue online pharmacies, similar to what Chris Hanson of To Catch A Predator did; DCA Executive Director Tom Galvin is determined to clean up the Internet and protect innocent kids from illegal pharmacies and drugs.

"What we learned in our investigation is overseas pharmacies don't care if you have a prescription and they don't really care how old you are. The main thing that they want is your credit card number or Western Union, so they can sell the drugs," said Tom Galvin in a recent interview with WUSA9.

These pharmacies prey on teenagers and they prey on addicts in their playground -- the Internet. Both situations are as dangerous and deadly as Tom Galvin explained when DCA set up a sting operation with an online pharmacy. They ordered prescription drugs (without a prescription) online, sent money to Pakistan, and received their drugs from India. The problem, besides the obvious, is after receiving the drugs they had them tested and determined that the one drug they ordered, Hydrocodene, was actually acetaminophen.

How does Google fit in?

When news broke last year regarding Google's involvement with online pharmacies to sell illegal and counterfeit drugs using Google's Adwords and other advertising platforms, the details that emerged from the settlement with the U.S. Justice Department for $500M, it shed light on the inner workings of how Google makes money. It was a bit disheartening to hear, since no one wants to believe that Google would intentionally sell advertising to illegal pharmacies. No one would begrudge anyone from making money, but when making money means potentially endangering others or worse, shouldn't there be a line drawn?

Since this settlement, the National Association of Attorneys General and DCA is looking into Google's role in this activity after discovering these ads are still running on YouTube. Attorney General Hood said that the violators were easy to find, "On every check we have made, Google's search engine gave us easy access to illegal goods, including websites which offer dangerous drugs without a prescription, counterfeit goods of every description," he said. "This behavior means that Google is putting consumers at risk and facilitating wrongdoing, all while profiting handsomely from illegal behavior." 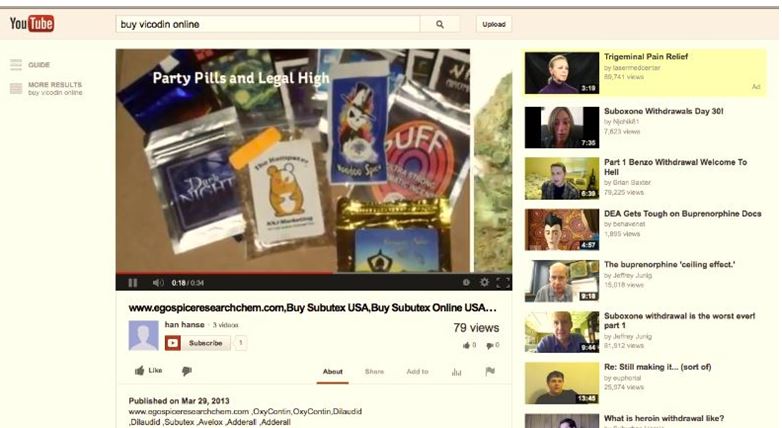 In a recent survey an average of 93 percent of teens check into YouTube weekly. It seems there is a backdoor for these rogue online pharmacies to reach minors and YouTube is the leaving it wide open. Google is extremely intelligent and so are drug dealers; it makes for a perfect storm, and unfortunately a potentially deadly one.

However, we are hoping that Google is doing the right thing by not allowing fake online pharmacies into their advertising campaigns. The Digital Citizens Alliance has done an extensive report on the relationship between Google, YouTube, and the Internet. Their summary reads in part:

By pointing out how YouTube has become overrun with thousands of potentially dangerous and harmful videos, we also call on Google to recognize the responsibility to clean it up. That is what a great company does and why the Digital Citizens Alliance is optimistic that Google can live up to its motto.

The DCA as well as StopMedicineAbuse.org and the Partnership at DrugFree.org continue to educate parents about the risks of over-the-counter medicine abuse and prescription drug abuse.

The organizations listed above are dedicated to making a difference, however parents and their communities need to start a ground swell with the Internet providers and bring it into the schools. We need to bring the same attention to prescription drug abuse that is given to bullying. Education is the key to prevention -- you don't need a degree to stop your child from making bad decisions, you only need to be there for them. Education comes in many forms, get educated from these websites -- and talk to your teens about the dangers of these modern-day drug dealers.

Some questions for Google:

• Why is it taking so long to remove all illegal online pharmacy ads?
• When an online pharmacy submits an Adword or Adsense ad for submission, is there no quality control? Shouldn't there be, especially when narcotics are involved?
• YouTube stated that they rely on users to flag their videos for censorship, but what about having their sales people flag their clients?

• Digital Citizens Alliance offers more valuable information about online cyber-crimes.
• Communication is key to prevention, keeping an open dialog with your teen is crucial.
• Pass this information on to a friend and another parent. Awareness is part of resolution.
• Don't allow revenue to control the Internet. Your voice can be powerful. Use it!

Be the change, be the difference, and remember -- Google is not God.