My law practice is dominated by contracts--short, long, confusing, one-sided; micro-font printed and by-the-pound custom door-stoppers. Folks who sign before fully understanding, or sometimes even reading, a legal document never cease to amaze and keep armies of trial lawyers in business. While I've seen this in practice, I've never had any quantitative data on the extent of the problem, that is until now.

The 2010 Denver Metropolitan Regional Science & Engineering Fair is February 24 and 25. Hundreds of students, grades 6-12, will set up their projects, an amazing array of intellectual curiosity, in the Denver Museum of Nature and Science. My 7th grade daughter's middle school held their science fair last week in preparation for Metro. In a room packed with displays, it was a study of contract-signing behavior that grabbed my attention. 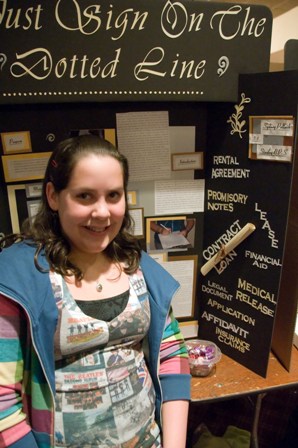 This 7th grade scientist/lawyer had stationed herself in the Cherry Creek Mall with a clipboard and a bowl of chocolates. She asked shoppers to help her compare the relative sweetness of the chocolates, but of course, first, they needed to sign a one-page, printed release. If they read the release, however, the subjects would learn that what she really wanted was for them to flip the page and draw a happy face on the back.

Only two of her twenty subjects drew a circle with eyes and a smile, and one of those two first apologized for having to read the consent form, because she is a lawyer. The click-to-accept contracts of the internet age and releases as justifiable paranoid responses to a litigious society apparently wore the rest into legal apathy. Maybe you, too.

Standardized contracts offered on a take-it-or-leave-it basis are, in legal circles, often referred to as "adhesion contracts." There are legal theories and court cases on why adhesion contracts are unconscionable and thus unenforceable--sometimes.

Is there a better example of a take-it-or-leave-it contract than the terms of use for social media networking sites like Facebook? A recent attack on Facebook's terms of service as an unenforceable adhesion contract, however, was rejected by a federal court. Law Professor Eric Goldman writes about the case in his Technology & Marketing Law Blog:

It's harder to trump properly formed online user agreements than most people wish, and this case is a small example of that. Facebook users who are unhappy with Facebook's user agreement can find recourse in a variety of ways, but assuming the contract is going to fail in court is one of the least preferred methods.

If legal issues arise under an unread or merely skimmed contract, resolving the issues by voiding the contract requires judicial action. That means long waits, legal fees, stress and hours of your time. Even if you succeed in defeating the contract--and that is hardly a given--think of what it has cost you.

So read before signing. If a contract is important, hire a lawyer to work with you. Even a take-it-or-leave-it deal gives you the choice of leaving it; if you do take it, take it knowing what is expected of you. Most likely it is more than a happy face.

Speaking of happy faces, the next time you are enjoying the spray of your morning shower in your face, consider the following photo from my daughter's Metro project. She and a partner tested shower heads for mold and bacteria growing inside the shower head. So read your contracts and occasionally run your shower head through your dishwasher. 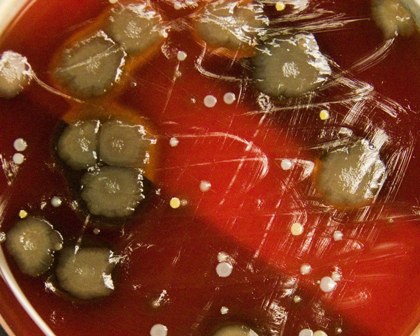