What is there in common between an Egyptian Pharaoh, a Swedish zoologist, a Bolivian lawyer, a Chilean war hero, a Nigerian bank manager, a tenth century Korean king and Mahatma Gandhi?

The image of all of them is on a banknote. Oh, yes, and of course they all are (dead) men.

We have learned recently that there is going to be a woman's face on the $10 bill, which is going to be the first woman to appear on any dollar bill, after more than one hundred years of male hegemony. These are good news, of course, but with my hand on my breasts, it's worth to admit that it is just too little. If this is the situation in the United States, who carries the flag of equality and liberalism, what happens in the rest of the world?

Well, at least this visual segregation of women is done in an exemplary equal manner. Bills from around the world carry depictions of all kinds of men, separated by centuries, continents and oceans, cultural and religious differences, black, white, Asian and Latino. Some are very well known, others didn't even make it to Wikipedia, but everyone gets a place and stage, pushing the women out of the picture.

Based on a research* that I recently conducted on all hundreds of bills used in all 195 countries around the world, there are 609 people who were chosen to appear on a bill, from which only 51 of them are women, approximately only 8 percent.

Ninety two percent of the people appearing on the bills from around the world are men.

And this is only an average, not the extreme. In many countries bills are 100 percent "male." In Cuba for example, you can find no less than 11 different testosterone makers, but not even a drop of estrogen. Guatemala and Croatia also maintained a zero representation of women, but used 10 suits for each country. You can also find zero point zero women representation in Albania, Poland, Singapore, Thailand, Armenia, Barbados, China, Hungry, Indonesia, India, Jordan, Mauritius and more. New records were broken by Ghana, who doesn't use a man on each bill, but six!

This situation is, obviously, not detached from any context -- and is a reflection of the discrimination against women throughout history. A large part of the faces were chosen decades ago, and no less important -- thousands of years of oppression allowed men to hold the senior positions in society. As such when going through the leaders, artists and the prominent personalities that have shaped our lives, we have many more men than women to choose from.


However, sometimes bills do not only reflect the reality, but also create it, and this particularly deserves our attention. Despite the small number of prominent women in human history, it is hard not to wonder about the democratic states that chose to exclude them entirely from their heritage.

In Croatia, for example, most of the bills were designed in the 2000s, and yet 10 men and no women were chosen to appear on the bills. Who is among them? A baroque poet from the 16th century, a general from the 19th century, a philosopher from the 15th century and a politician from the the 20th century. Could it be that during 400 years there was not even one woman who was good enough to belong with them?

I am not an expert on Croatian culture, but a very simple Google search finds a female writer, a female painter, and a female Croatian war heroine who were all worthy of recognition. Is this coincidental? I don't think so.

The history is rewritten by the victorious, and the almost total absence of women from their commemoration on money is striking evidence of this.

In this sense, the bills around the world reflect to us a double glass ceiling -- if by chance some woman already managed to forge ahead despite all obstacles, when men come to choose which one of their cultural heroes will be commemorated, she will be left behind and will be forgotten. And so the false idea that half of the population was irrelevant to human society for centuries is being perpetuated.


God save the Queen


But why to pick banknotes, when men are also featured in the names of streets, parks, stamps and statues? In our era, when money turns the world around, a nation's bill is almost its national symbol, its display window in and out. More importantly -- the face that appears on these bills might be the public face we see most often. We are so used to them that we do not always remember exactly who appears on a bill -- but we do remember, that no matter which one it is, it is a man. We are not the only ones who remember, also our daughters remember, and they understand already from their first pocket money, who rules the world, bill by bill, and especially who doesn't.

It is time to correct this. Not just a single, out of the ordinary exception, but rather a completely equal representation: It is time to make sure all the new bills bear the depiction of a woman, until we reach the 50 percent representation of women. In the meantime Australia is alone in this battle, choosing a creative solution -- on each bill of the state -- there is a man on one side and a woman on the other side. A male politician next to a female writer, a male poet next to a female poet, a priest next to a businesswoman, a male tribal activist next to a female politician, a male commander of the army next to a female opera singer. And naturally the $5 bill devoted to the Queen of England, God save the Queen. 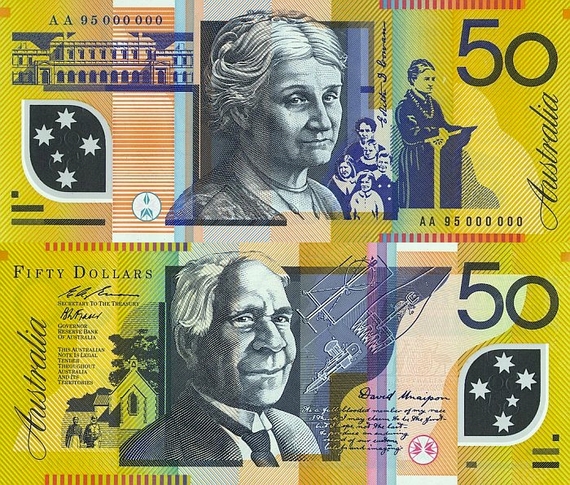 And those people that say that it is hard to find women? Well, that's just their problem. For banknotes that will be printed within 100 years there will be a better cadre to chose from -- search better. For example you can start focusing on areas that are less dominated by men such as generals, politicians, sculptors, and classical composers (very common on bills) and provide a platform for female revolutionaries, women humanitarians, female poets and musicians, who broke through, each one in their field, and influenced society not less.

This is the minimum that we deserve. If we were less forgiving we would demand at least 100 years of 100 percent women domination on bills. I am sure that God, in Her wisdom, knows that we would deserve that.

* The research was done through online databases, and there might be simple updating issues and a slight deviation in the results.