For this month's HuffPost Book Club, I have chosen a big book -- both figuratively and literally. Jeremy Rifkin's The Empathic Civilization clocks in at close to 700 pages and sets out to present nothing less than -- as Rifkin puts it -- "a new rendering of human history and the meaning of human existence."

This alternative history focuses not on the conflicts, antagonisms, and power struggles that have marked human progress, but on "the empathic evolution of the human race and the profound ways it has shaped our development and will likely decide our fate as a species."

Empathy, Rifkin tells us -- and backs up with new scientific data -- is not a quaint behavior trotted out during intermittent visits to a food bank or during the Haiti telethon. Instead, it lies at the very core of human existence.

This is something I've long believed. Indeed, I dedicated a whole book to exploring what I called The Fourth Instinct -- that part of the human character that compels us to go beyond our impulses for survival, sex, and power, and drives us to expand the boundaries of our caring to include our communities and the world around us. 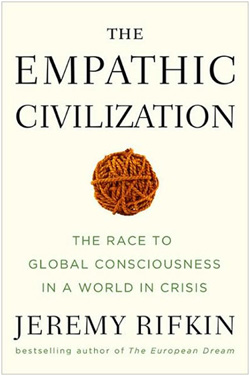 And, in the 15 years since then -- and especially since the economic meltdown -- the role empathy plays in our lives has only grown more important. In fact, in this time of economic hardship, political instability, and rapid technological change, empathy is the one quality we most need if we're going to survive and flourish in the 21st century.

It's important to keep in mind what empathy is -- and what it's not. It's different than sympathy, which is passive. "Empathy," explains Rifkin, "conjures up active engagement -- the willingness of an observer to become part of another's experience, to share the feeling of that experience."

But empathy is not just about feeling for another's suffering. As Rifkin points out: "One can also empathize with another's joy." Indeed, according to Rifkin, "empathic moments are the most intensely alive experiences we ever have. We empathize with each other's struggles against death and for life. One acknowledges the whiff of death in another's frailties and vulnerabilities. No one ever empathizes with a perfect being."

As he does in all of his work, Rifkin really swings for the fences in The Empathic Civilization, challenging us all to rise above the clutter of our daily lives, and explore life's larger questions. He is that rare breed, one whose disappearance is often and rightly bemoaned: a public intellectual. Or, as the New York Times once called him: "a social and ethical prophet." Aside from authoring 17 bestselling books, he's the president of the Foundation on Economic Trends, an advisor to the European Union, and a senior lecturer at Wharton's Executive Education Program.

I chose The Empathic Civilization as this month's selection because, besides being a brilliant read and offering a vitally important perspective, it is the perfect companion piece to last month's selection, Janine Wedel's Shadow Elite: How the World's New Power Brokers Undermine Democracy, Government, and the Free Market. While Shadow Elite lays out precisely who and what currently have a stranglehold on our political system, The Empathic Civilization shows us the way to decisively break that hold.

Rifkin divides the book into three parts. The first takes a look at the new scientific discoveries that lead to the conclusion that rather than being naturally aggressive, acquisitive, and self-involved, humans are "a fundamentally empathic species" -- what Rifkin calls Homo empathicus. The second part charts the development of human empathy, "from the rise of the great theological civilizations to the ideological age that dominated the eighteenth and nineteenth centuries, the psychological era that characterized much of the twentieth century," and the emerging trends of the 21st century.

In the third part of the book, Rifkin focuses on the nascent Third Industrial Revolution and the rise of The Age of Empathy. According to Rifkin, the progress of civilization has been a constant struggle between empathy -- increased human connection -- and entropy, the deterioration of the health of the planet. It is, quite literally, a race against time. "We are on the cusp of an epic shift," he writes. "The Age of Reason is being eclipsed by the Age of Empathy."

Rifkin believes this age will be defined by how well we navigate the massive changes in both information and energy technologies. He explains that every great leap forward in civilization has involved a combination of a communications revolution along with an energy revolution. For instance, the advent of the printing press provided the "means to organize and manage the technologies, organizations, and infrastructure of the coal, steam, and rail revolution." And each one of these leaps expands the circle of empathy -- from tribes, to nation-states, to continents and, if we're lucky, to the entire world.

We are currently going through a communications revolution like no other in human history. But, Rifkin warns, we must guard against universal connectivity becoming an end unto itself. "We talk breathlessly," he writes, "about access and inclusion in a global communications network but speak little of exactly why we want to communicate with one another on such a planetary scale. What's sorely missing is an overarching reason for why billions of human beings should be increasingly connected. Toward what end?... Seven billion individual connections, absent any overall unifying purpose, seem a colossal waste of human energy."

The Empathic Civilization is a fascinating book that boldly challenges the conventional view of human nature embedded in our educational systems, business practices, and political culture -- a view that sees human nature as detached, rational, and objective, and sees individuals as autonomous agents in pursuit primarily of material self-interest. And it seeks to replace that view with a counter-narrative that allows humanity to see itself as an extended family living in a shared and interconnected world.

Please read The Empathic Civilization and join in our month-long discussion about it. Not only will Jeremy Rifkin be regularly blogging about the issues his book raises, we will also be featuring posts from over 30 of the world's leading scientists, scholars, and public policy intellectuals in a many fields, which will allow us to have a robust and informed discussion on what it will take to create and nurture a truly empathic civilization.