A new postal stamp in French Polynesia highlights a mural at the "ONO'U" festival in Tahiti, a first for the multi-island country as well as the French Street Artist SETH and his local Tahitian collaborator, HTJ.

Introduced in New York last week at the decennial World Stamp Show, an eight-day stamp extravaganza visited by a quarter of a million people, the new 140 CFP stamp depicts his mural at the 2015 "ONO'U" festival, as shot by photographer Martha Cooper. 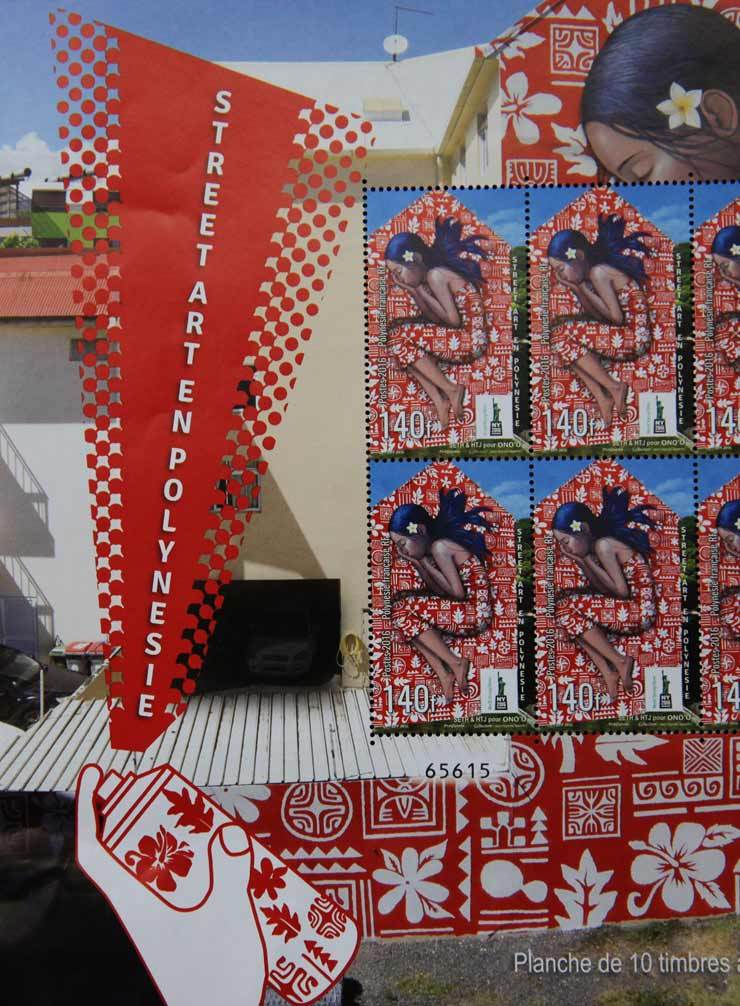 French Street Artist SETH mural for ONO'U Street Art and Graffiti Festival in Tahiti, French Polynesia in 2015 was selected by the country's Postal Service for their new Philatelic Stamp issued in time to represent French Polynesia at the World Stamp Show in New York City this year. SETH was assited on this mural by HTJ. (photo © Jaime Rojo)

The six-story painting depicts a sleeping French Polynesian girl wrapped in a traditional pareo dress that also morphs into traditional bed covering called tifaifai. "To design the patterns he collaborated with a local artist, HTJ, " says ONO'U co-founder Sarah Roopinia,"and Seth conceptualized the girl sleeping, protected under the traditional patterns. It's like a guardian protecting her with her culture and also she's also representing dreaming about the future of French Polynesia."

The white cut-out forms on the intense rouge background have propelled the design to stardom among ONO'U's social media followers and when the postal service approached organizers to make a commemorative stamp of the 2-year old mural festival in downtown Papeete, Roopinia and her co-founder Jean Ozonder jumped at the chance. "What we liked with this production was having the opportunity to broaden the impact of street art and to have more people be aware of it," she says. "To us the idea of a postal stamp was an original initiative and a way to bring this art into an area where you would not expect to find it." 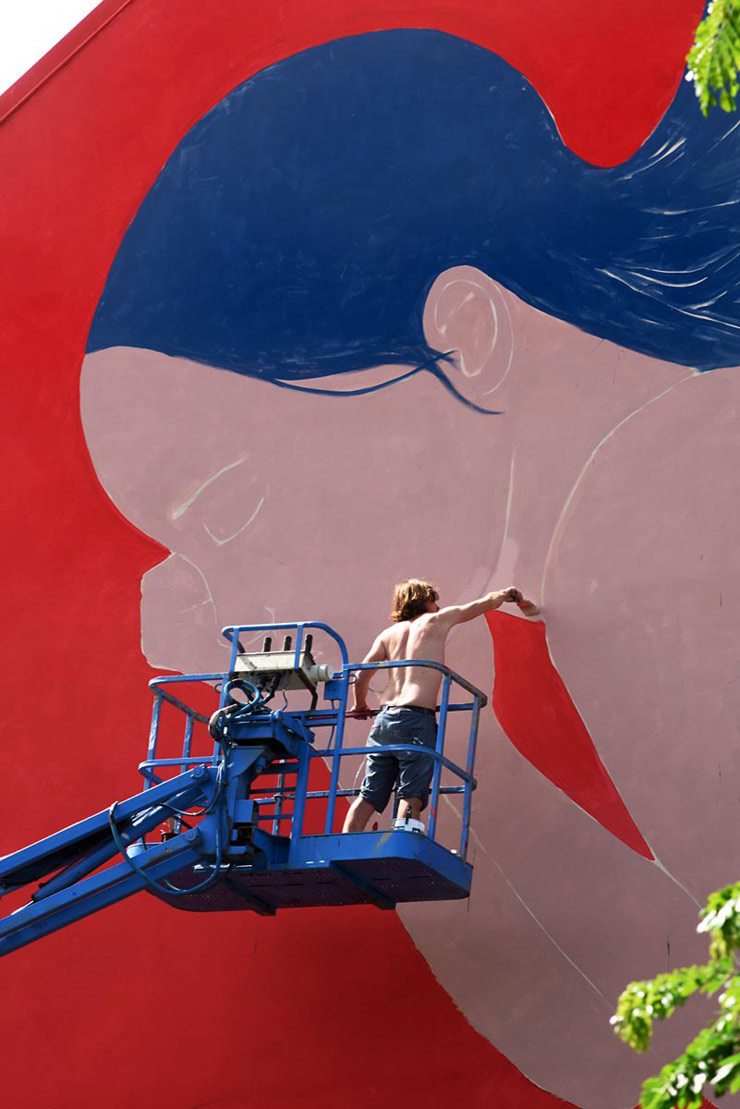 Looking at the patterns in the bedspread you may also see more than the folklore forms of typical plant leaves and the Tiaré flower that many wear tucked behind an ear in archetypical portraits. You also may recognize a symbol for radiation near the girl's back and the form of an atomic mushroom cloud near her bended knees, both referencing the approximately 175 nuclear tests that France did on the island of Moruroa from roughly 1966 to 1996, tests which The Gaurdian now says "showered vast area(s) of Polynesia with radioactivity."

By inclusion of these symbols with more traditional symbols in the new piece one is reminded of the inclusion of historical disasters traditionally in folk art ranging from pottery to quilting. Since we began making art we have been storytelling about natural disasters, man-made disasters, wars, political upheavals, societal shifts, milestone events and religious practices. 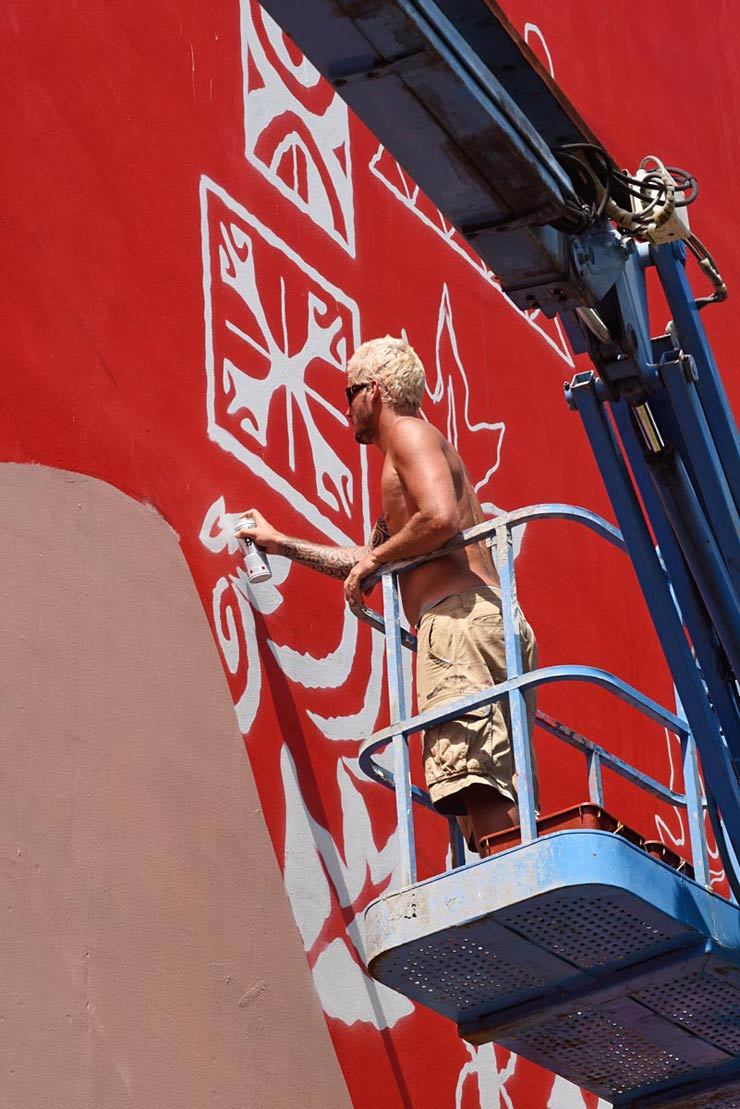 As street art-influenced murals have gained a wider audience across the world and certain works and artists are highly celebrated, there have been other issues of official stamps in recent years including works from Invader, Shepard Fairey, C215, Rero, Vhils, Ludo, and Mis Tic. The presidents of France and Singapore released a dual "Street Art" stamp a year ago and a recent Polish stamp depicts a 4 story wall by Polish painter Natalia Rak in Białystok, Poland, of a young girl in traditional Polish dress who is watering a tree.

The ONO'U festival is now readying for its third edition and Ms. Roopinia was in New York with Mr. Ozonder to check out the current street art scene, the Coney Art Walls, the Governors Ball concerts and to share their new stamp with the thousands of people trekking by at the stamp exhibition. Roopinia tells us that the hugely successful festival draws top names for exhibition and competition from both the street art and graffiti world, but initially the mayor of Papeete, landlords, and the local businesses were rather hesitant, as were street artists who had not considered going to a place where there was not a large graffiti or street art scene to speak of. 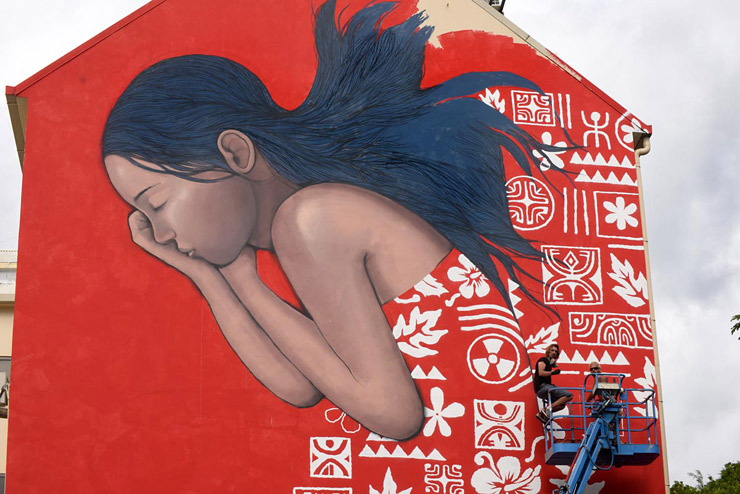 "The challenge that we had was convincing the best street artists in the world to come to a 'lost paradise' to paint gigantic walls right in the center of the city. For a whole year we were working on finding walls, convincing the owners. Basically for the first six months no one was willing to give us their walls because they thought that it was all going to be horrible -- so convincing the population was difficult," she says.

"I could feel that some of the politicians were not very happy that we were going to do this in the beginning because they didn't understand exactly that a small team could do such great things with artists," she says, but the response of locals and businesses was overwhelmingly good, and word of the festival spread among artists, not least because most of their costs are covered and, by the way, they are painting in Tahiti after all. 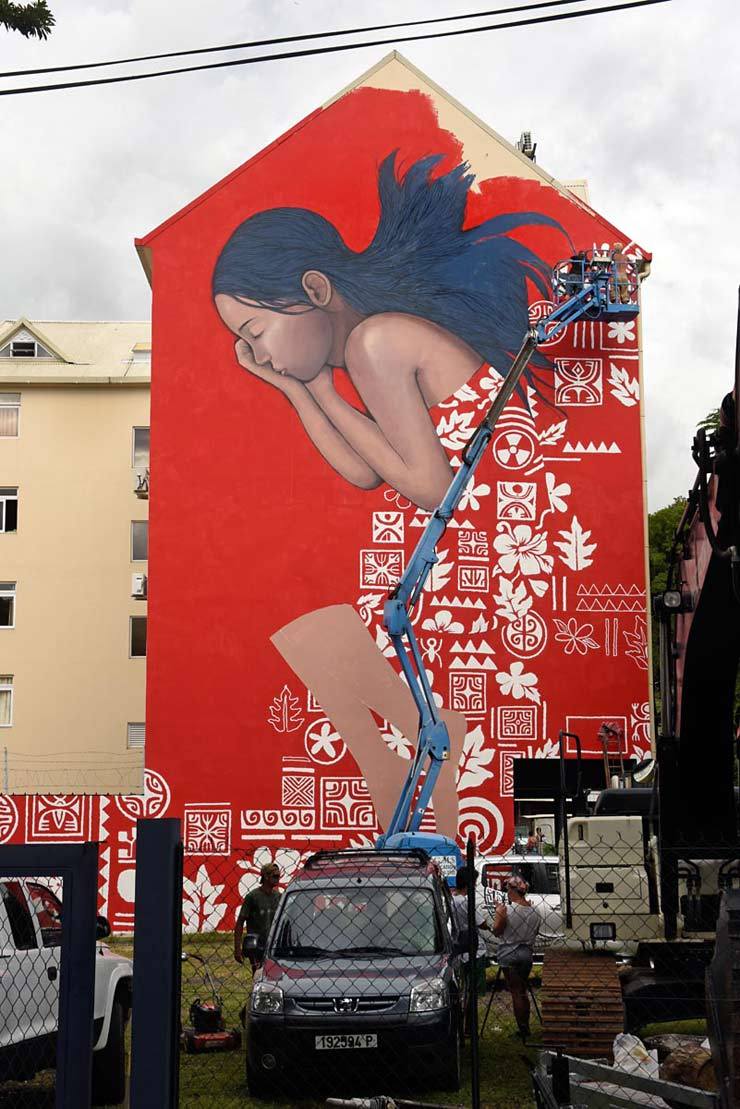 "The second year the volume was really incredible," says Jean of the interest that was piqued and the good reviews that went out among artists. "So many guys wanted to be invited to be a guest or to make a wall and we said 'We can't invite everybody because there is a budget.'

And quite a substantial budget it is. The partners say they have to raise over €300,000 a year and "80 percent of the festival is funded by private partners and sponsors," including brand names like Nissan, Perrier, and Montana paints. The remaining 20 percent is funded by the city and the Ministry of Tourism. 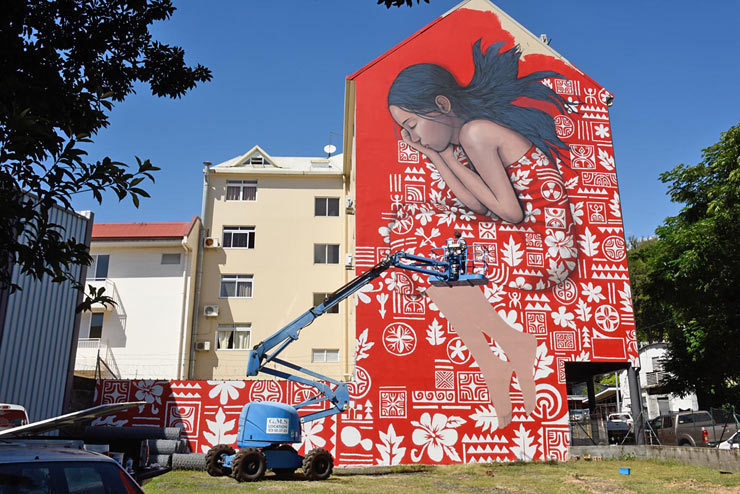 "The festival is always about two things," says Roopinia, "There are 'the main walls' which are by larger names like Seth or Kobra that are right in the center of the city you can walk from one wall to the other, making a very beautiful art promenade or city walk. At the same time that this is happening there's a contest that invites mostly graffiti artists -- in the rules it's only aerosol and there are no stencils -- we really try to keep it strictly graffiti."

Considering they already have a stamp and cruises are now dropping off visitors to walk through the streets and discover murals, it looks like ONO'U is putting Tahiti on the map for international street mural fans. "There is a general enthusiasm," says Roopinia of people not just in Tahiti but across many of the 118 islands of French Polynesia. "So the festival is taking place on Tahiti and in Pepeete (the capital) where most people live but the impact is also through the TV, the Internet, and on the social media. But also in the outer islands they were flying to come in to see the walls and talk to the artists during the festival. Everybody is out walking in the streets talking with the artists, taking pictures." 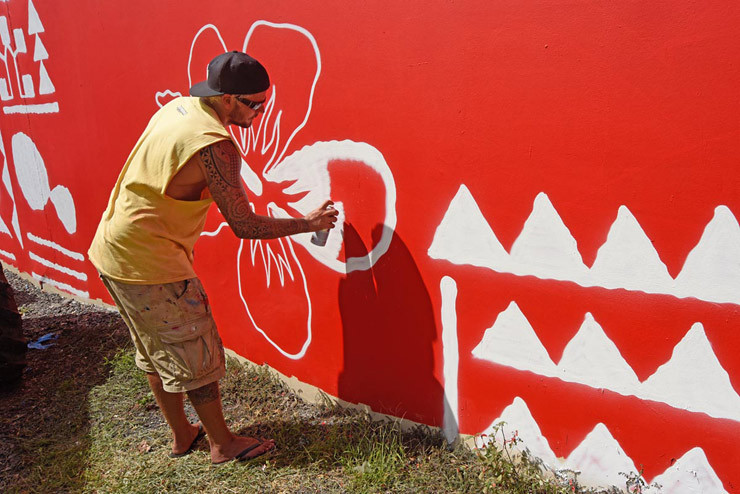 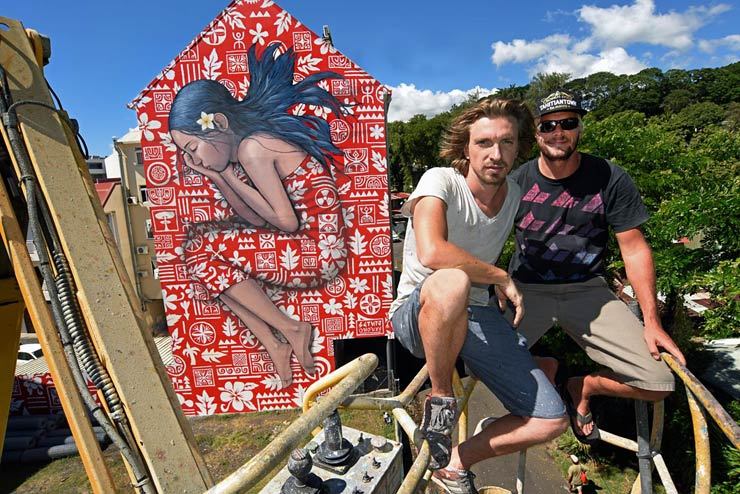 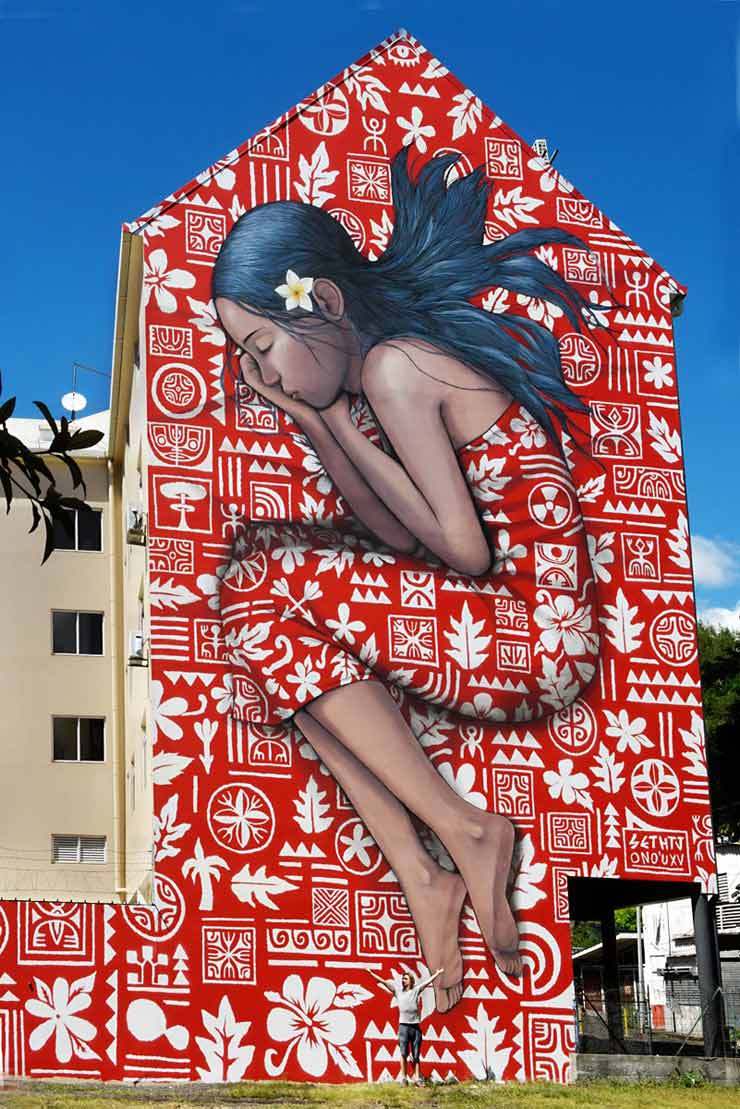 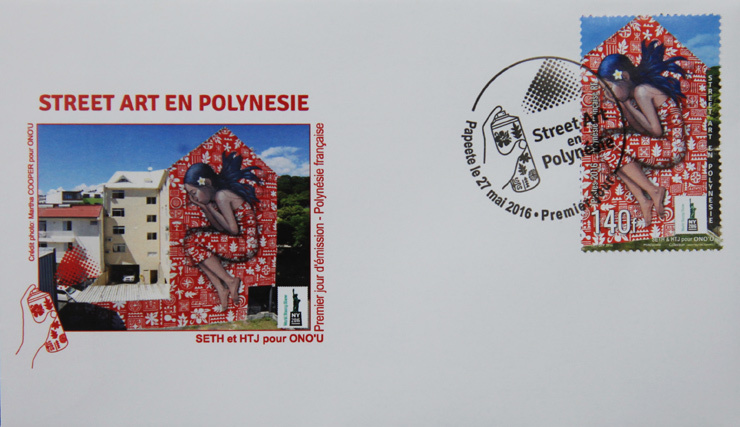 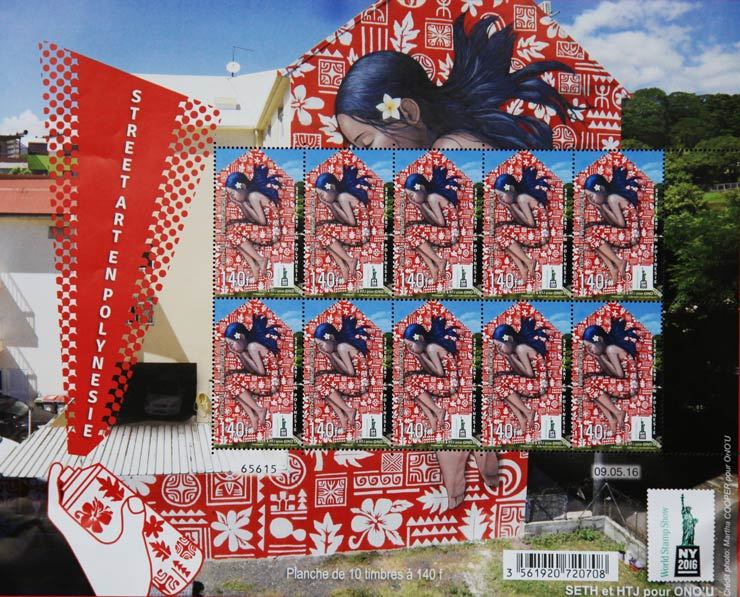