Juno, the next generation Jupiter-bound mission, broke the record for the farthest space-fairing solar-powered craft.

Juno broke the record recently when it traveled over the 493 million miles set previously by the European Space Agency's Rosetta mission. It has still to reach Jupiter, where light from the Sun is 25 times weaker than on Earth. Having this in mind, engineers gave Juno, a 100% solar power spacecraft, three huge solar panel arrays, each one 27 feet long. The panels have a total surface area of 261 square feet and are composed of nearly 19,000 individual cells. That makes it the largest solar panel array ever used in a spacecraft. The maximum energy output around Jupiter will be of only 486 watts, and that will come down to about 420 watts by the end of the mission in 2018, as radiation damages the panels. 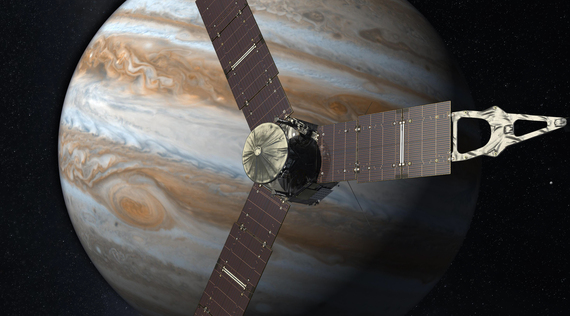 Man has sent just a handful of robotic missions to the largest planet in the solar system, due to distances and therefore costs. Jupiter is, on average, five times farther away from the Sun than Earth. At their closest approach, our planet and Jupiter are still 365 million miles apart (601 million at their farthest).

Juno launched in August 2011 and will enter orbit around Jupiter on July 4, 2016 and is expected to complete 24 months of research. The instruments aboard Juno will let us know more about the unique exotic phenomena present in Jupiter: the largest magnetic field in the solar system generated by liquid metallic hydrogen in its core; the cyclonic Giant Red Spot which was three times the size of Earth, and has existed for centuries but just recently is quickly shrinking in size; its atmospheric dynamics and polar auroras. Given that the temperature and pressure conditions on Jupiter are so exceptional and cannot be reproduced in a lab, we will gain insight on extreme physics. 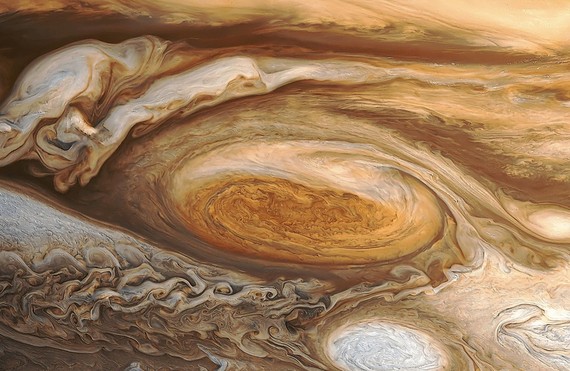 Additional obtained information will also pave the way for future missions which will focus on the moons, such as the Jupiter Icy Moon Explorer (JuIcE), set to launch in 2022.

The Jovian moons are some of the most interesting places known to humanity. Europa is covered with ice and possibly harbors a 60-mile deep ocean of liquid water heated by the moon's core which might have developed life. Io has active volcanos spewing over 1 ton of material every second, disrupting Jupiter's magnetic field. Ganymede, the largest moon in the solar system, may contain a subterranean ocean with more water than there exists on Earth. Hyperion is a heavily cratered, sponge-like asteroid that was captured by Jupiter and now acts as a moon. Other tiny captured asteroids, now moons, shepherd Jupiter's disappearing/reappearing system of rings in place.

It was no surprise then when NASA approved the design of the Juno mission to learn more of Jupiter within its New Frontiers program, engineered to study the planets of the Solar System. This recent record is certainly just the first of many to come.