I want to preface this with a note to the Trolls, the Mansplainers, the Actually Men, and the Sad Men: I don't owe you an explanation. I shouldn't have to explain my little jokes to you or justify my real life to anyone. Yes, posting something to the Internet is a dangerous prospect indeed. Once it's in a public forum, people are free to respond. But one of the many differences between you and I is that I didn't come after you or anyone personally. I just spoke a little bit of truth about my life in a way that made me (and turns out, many others) laugh.

Of course, you are "free" to respond, but that doesn't mean you should. Your decision to respond in a negative, sometimes abusive way is much more of a reflection on you than it is on me or anything I tweeted. Finally, the following isn't for you, it's for me and my pals. Please go away. 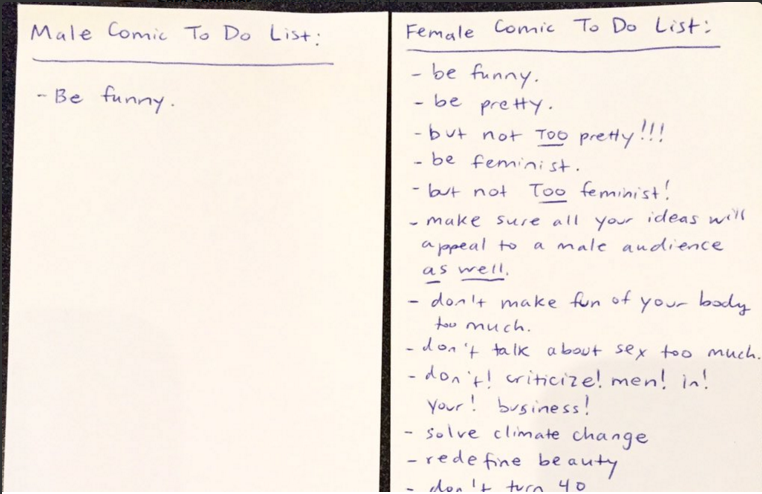 I posted this picture on Twitter earlier this week and it blew up. I didn't think it was going to be that big of a deal. I sat in a diner and scribbled it down, and posted it, chuckling to myself.

I was just thinking about some of the crap that you have to deal with as a female comedian. I was thinking of the discussion and criticism surrounding female comedians in the press, the expectations society has;, and the things people -- friends, coworkers, audience members, strangers, industry types, agents, managers -- have said to me over the 14 years I've been doing this.

And in that moment, I just felt so tired.

I just wanted to be free of the buzzing for a while. I wanted to know what it would be like to go into a pitch meeting and not be told that they "realllllly need female talent!" and look at me as some kind of novelty. Or to be asked "how will this appeal to our male audience?"

I wanted to know how it felt to not be asked to comment on this topic every time I do an interview. I wanted to know if it was possible for a female comic to become famous without the world centering their attention on her appearance, her politics, her every single move. I wanted us all to be free of it for a moment, and to be allowed to just be funny. To just be.

So I wrote this list. It's a "To Do" list. Not a list of rules, not a "how to" or some prescriptive for success. It's not self-imposed and it doesn't explain why or why not a woman becomes famous. In fact, this list is a critique of all the things people, society, and industry types tell you to do along the way. Things that are paradoxical and impossible to achieve. If anything, this post was meant to be a giant middle finger to all of those ideas. It's me wanting to move through the world unfettered by this incessant background noise.

So I posted it.

I figured that my comedian friends would appreciate it and figured maybe a few dillholes would have a problem with it. We'd move on within 30 minutes and that would be that. But then, the post kept getting retweeted (more than anything I've ever posted), and apparently, it reallllllly bothered a lot of men.

"Sorry, well-meaning Actually Man, but I don't need your input. The implication that I'm not doggedly working on my comedy every damn day is insulting."

Though I don't recommend reading them (because it's all just so boring), my mentions on Twitter right now are filled with knuckle-dragging boneheads wailing about something they do not -- not even a little bit -- understand.

Many of them were upset because they believed I was suggesting men "have it easy." But of course, this very assertion betrays their ignorance about comedy and how one goes about doing it. The first item on the list, "be funny," is HARD AS FUCK to figure out, and even harder to turn into an actual career --  no matter who you are. The list doesn't suggest that it's necessarily easy for men; it's just pointing out the added stuff that women have to deal with. Annoying mosquitos that men almost never have to swat away.

Most big female comics have openly talked, joked and written about these various issues. (Gotta love the lack of research these guys do.) They absolutely grappled with these questions, and they overcame them. They are my heroes.

I also got a lot of this: "Funny is funny." "Just be funny! None of that other stuff matters." Again, they chose to ignore my point, dismiss my own experiences, and ever so subtly tell me I'm wrong.

Sorry, well-meaning Actually Man, but I don't need your input. The implication that I'm not doggedly working on my comedy every damn day is insulting. And it's true: When I'm writing or performing or producing or shooting something -- that's as close to freedom from the noise I ever get. It's my happy place. It's how I got where I am today.

But there's this insane double standard in which women are expected to mold themselves to society's expectations but at the same time be completely impervious to them and rise above like some kind of phoenix. (The "We want you to be skinny, but only if you're naturally skinny" double standard is a perfect example of this type of thinking.) They want me to "ignore all that, stop whining and just be funny," but at the same time, they definitely want me to stop, think about their amazing, intelligent, never-before-made point. You can't have both.

As if every other week we don't see a new article about the down-trend of female roles and jobs in my industry; as if we don't keep finding out we're getting paid less than our male counterparts; as if women's bodies and humanity aren't under constant attack in every cranny of society. These men are acting like I posted a video of myself beheading a man and screaming out "KILL THE MEN! THE REVOLUTION IS UPON US!" When in reality, I barely said anything of note, and it definitely wasn't a shocking revelation to anyone who does this for a living.

"There's this insane double standard in which women are expected to mold themselves to society's expectations but at the same time be completely impervious to them and rise above like some kind of phoenix."

Bottom line: it turns out that these men telling me to "man up" are just so incredibly fragile and sad. They can't handle a joke. They can't even understand a joke.

(I should note that in the annals of women being attacked on-line, I am aware that this is very low level. The horrors that other outspoken women -- especially women of color -- deal with on a day-to-day basis dwarf my little foray into the troll universe.)

These dudes' self-assuredness is hilarious to me. They show up guns blazing to a battle I've already been in for my entire life. They foolishly think I don't have the receipts for my claims; and will declare victory just because I choose not to spell it out for them. Of course, I know that it's a fruitless endeavor, because they are not, as they assert, interested in "debate," or open to learning anything new.

Essentially, they just want me to be quiet. They say my refusal to "debate" means I'm weak. When in fact, I could easily crush their flawed logic and dance circles around their poorly conceived insults, if I felt like it. If I do deign to respond, I usually try to be calmly blunt, which of course they hate, because they don't know what to do when a woman isn't constantly softening her tone. And yes, sometimes I get snarky, and occasionally I lose my cool, which of course they will pounce upon as evidence of my shrill culpability.

No matter what their angle is, they have no idea how neatly they are proving my original point.

The good news is, lots of nice, smart people have said nice, smart things. I've learned that, when a tweet blows up, it's easy to forget why it blew up in the first place: because lots and lots of people liked it, felt it, and agreed with it. It means you said something that rang true.

Meanwhile, it's just another day of being a woman with thoughts on the Internet.