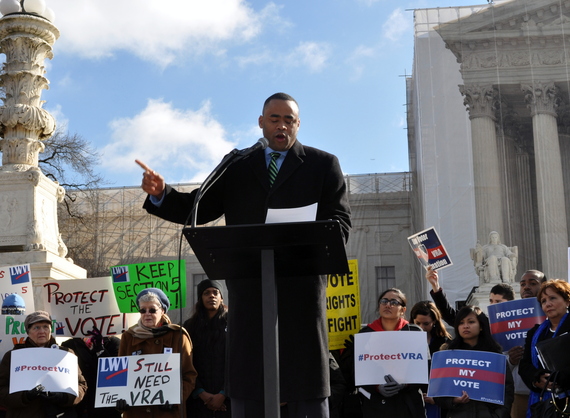 This week, the civil rights legacy of President Lyndon B. Johnson is being celebrated and every Texan should be proud.

President Barack Obama and three living former U.S. Presidents -- George W. Bush, Bill Clinton and Jimmy Carter -- are visiting the LBJ Presidential Library in Austin to discuss such issues as same-sex marriage, immigration policy, race, women, and education and to honor President Johnson's tremendous leadership in winning passage of the Civil Rights Act in 1964 and the Voting Rights Act in 1965.

Together, these laws set out to ban discrimination based on race, color, sex, religion, or national origin and our nation is better, stronger and more righteous because of LBJ's courage, vision and iron will.

In the years since the passage of these benchmark symbols of American progress, other Texas leaders -- Senator Lloyd Bentsen, Congresswoman Barbara Jordan, Congressman Henry B. Gonzalez, Governor Ann Richards, Speaker Jim Wright and many others -- have honored Johnson's legacy by continuing to work on behalf of all Texans.

It is important, though, that this occasion in Austin also acknowledge the shadow hanging over the Lone Star state because of how some Texas political leaders continue to engage in ugly and overt discrimination against Texas Hispanics and African Americans.

Our current Governor, our Attorney General and some leaders in the State House and State Senate are marring Texas' proud legacy of civil rights heroes like Lyndon B. Johnson.

No other state in the country has adopted a redistricting plan or a voter ID law that has been found to violate the Voting Rights Act.

This didn't happen 50 years ago or even 15 years ago. It happened two years ago -- and it happened because legislative leaders passed these laws under the guidance of Attorney General Greg Abbott, with the support and encouragement of Governor Rick Perry.

Back in 1964, when LBJ passed the Civil Rights Act, Hispanics and African Americans combined made up less than 20 percent of the Texas population. Today, these Texans and other minorities constitute more than half of our state's citizens.

Abbott, Perry and GOP legislative leaders should be working to win the support of this rapidly growing part of the Texas electorate. Instead, they have chosen to undermine and suppress the strength and influence of minority voters -- to cheat these Texans out of their chance to vote for candidates they care about and policies they believe in.

In Texas today, those fighting for civil rights don't wield fire hoses in the streets or collect taxes and administer tests at the polls. But the Texas politicians who fight voting fairness today use the Texas Attorney General's office and legislative weapons that have the same effect, often using them against the same minority senior citizens who fought the early civil rights battles.

It is profoundly important to honor President Johnson's historic contributions to justice and democracy -- and to appreciate how hard he fought for the rights of every Texan and every American.

We cannot properly honor President Johnson or his legacy, however, unless we are also unafraid to call out the current state leaders who somehow see their own ambitions and political future dependent upon discounting and suppressing the precious voting rights of Texas voters.