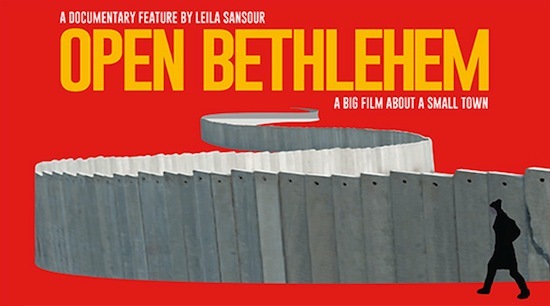 In the last couple of days I've seen two headlines which make Leila Sansour's film-slash-human-rights-movement Open Bethlehem both perfect and important. And her timing, her instincts are impeccable, as she kicks off today a crowdfunding campaign on Aflamnah to spread her mission -- to save the city of Bethlehem from "strangulation," as Reverend Desmund Tutu called it -- to the USA.

While Pope Francis, during his Angelus prayer on Sunday, begged God so the "persecution against Christians that the world tries to hide, finishes and there may be peace," elections are underway in Israel. And although it's undeniable that murdering for religion is unacceptable to probably everyone who will read this piece, perhaps the Israeli Palestinian situation is, for some, more tricky to take a stand on, because it's more complicated to fully understand. I always remember a reader's comment on a piece I wrote years ago about a film with a pro-Palestinian story being shown at the UN. He stated, unapologetically, that when it comes to Israel, "you can either be for it or against it."

Perhaps I'm an idealist, but I am for peace, human rights and justice.

And that justice, which may be the key to peace, is impossible to achieve while Bibi talks the way he does, while settlements continue to be built, and walls -- those ugly weapons of mass separation -- are erected.

It's exactly a wall, one that surrounds, divides and alienates Bethlehem's Palestinians (predominantly Christians, by the way) that is at the center of Sansour's film.

Open Bethlehem has already been watched by more than 15,000 audiences in the UK, where respected Channel 4 journalist Jon Snow said about the film, "one of the most remarkable and moving documentaries I have seen, about this unreported story. The tragedy of the Palestinians encapsulated in the life of one family and one town -- Bethlehem. See the film, then go to Bethlehem and see for yourself." Not bad coming from a man who has been on the front lines of many world conflicts.

I caught up with Sansour over email, to find out more about the film, the Aflamnah campaign and the woman behind the story but also at the forefront of a world-changing movement.

Do you believe that film has extra power in helping to explain conflict, and bridge the divides?

Leila Sansour: Yes, I do. The reason conflicts often remain misunderstood, not least by people who have influence on their future, is because the events of the conflict happen far away. You can read about them, that is if you can get hold of good genuine accounts, but you do not experience them viscerally. They don't get under your skin. They don't become your issue. I think through film, we have a rare opportunity to make people care, to take them out of their comfort zone and make them experience what it means to walk in someone else's shoes. We need to remember that, on the whole, people are kind; they want to do the right thing; they have empathy; but we need to bring the experience to them. For a cause like ours, where we do not have strong allies, and where material interests drive the process and ensure things don't happen our way (although this is changing), the sympathy of people and their emotional commitment to your cause become key elements in the equation.

This is, in addition to the fact that films have the ability to travel far wider than any other medium. We can reach millions and we can reach them in a way that they will always remember us.

Your film is an obvious example of how to create a cinematic movement. Can you talk a bit about what is next for the film?

Leila Sansour: We intend to take the film, the passport appeal and our campaign to the USA this coming Christmas. We want to act ambitiously and boldly, and the passport allows people to become "citizens" of Bethlehem and join us, symbolizing that they believe in our mission to save my hometown and bring down the wall. Jimmy Carter, Desmond Tutu and Jon Snow are among those who have already gotten involved. We want to reach out to more opinion formers, the press, heads of churches and major institutions to sensitize them to the story of Bethlehem and the challenges it faces today. We would like to invite them to join us and provide them with a variety of smart communication tools to help them advocate on our behalf. These tools will include both online and physical objects ranging from presentations and ads to maps and beautifully produced apps and advent calendars that act as attractive online seminars to turn people into better ambassadors for our cause. 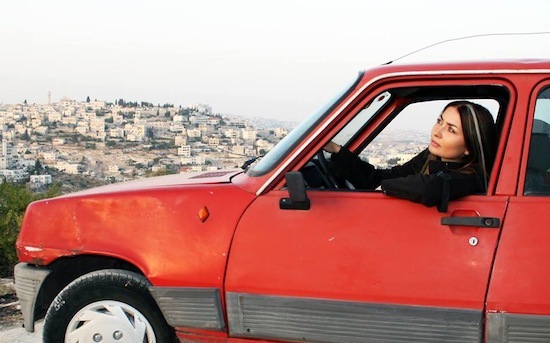 We also want to release the film on DVD and VOD so that people can share the message and experience Bethlehem wherever they are.

In other words, we want to do our best to reach out to millions and make them highly sensitive to our struggle. For this, we want our friends and supporters to join us on the journey so that we can reach our full potential.

You've raised funds to make your film in the past. What are you crowdfunding for now, and why did you choose Aflamnah?

In the past, we had backers but we have not tried to do crowdfunding campaign. This is our first one. We feel we are in a good place at the moment to mobilize our friends and supporters through a consolidated open call.

The film was just released in the UK to critical acclaim. It was accompanied by an audience outreach campaign which has proved our vision and strategy are very effective and successful. There is a huge appetite for the film in the US and for the issues that it tackles, not least the plight of Palestinian Christians which could be a central issue that highlights the plight of all Palestinians.

I have to say, it gives us special pleasure to start this effort via Aflamnah, a platform that is based in the Middle East, among friends who share our hopes and aspirations, and one that was started and made successful by Vida [Rizq], a fellow Bethlehemite. All this feels very special.

We feel that this could be a key campaign to reach out to the Americans and ask them to review their positions on Palestine. In fact, I believe, if this is done right, to its full potential, it could be a game changer. But, we are not there yet. We need our friends and supporters to understand our vision and strategy and to get behind us in a solid and committed way. This might still take some time but we are not giving up.

We are currently fundraising to secure a solid plan and to establish partnerships for the release of the film and campaign in the USA this Christmas. We need to build an executive team and volunteers and produce all the materials needed to support the release in the USA, and begin raising funds for our tour of the states, cinema bookings, media support, etc.

To someone who hasn't watched the film, what do you suggest doing, to instruct themselves more on the situation in Bethlehem?

Leila Sansour: To start with, I would really encourage them to see the film. I believe I did my best to allow people to see inside Bethlehem and experience the challenges it faces today. I would encourage people to keep an eye on our website because we will soon be updating it with a variety of materials that help people experience Bethlehem online. Most importantly, and very soon, people all over the world will be able to choose to become citizens of Bethlehem by taking part in an online effort that would allow them to spread our message and help themselves and their friends and representatives learn more about Bethlehem.

What do you hope to achieve, when all is said and done?

And finally, three words that describe you personally.

Leila Sansour: I'm not sure I could describe myself accurately, but our executive producer Waël [Kabbani] always tells me I'm "brave", "innovative" and "tireless".

All images courtesy of the filmmakers, used with permission.