"Of Cambodia, the world only remembers about the Khmer Rouge. What everyone really needs to watch out for now is the Khmer rich."

So pensively stated my Cambodian friend working in Phnom Penh's burgeoning financial sector. As we gazed out from the rooftop of Vattanac Capital Tower, the tallest building in the capital, we could see the frantic pace of construction throughout much of the city--along with the endless shantytowns and slums which hugged the edges of those very high-rises.

The Wild East of Resource Exploitation

The summer after the first year of my JD studies, I was a 2013 Summer Legal Fellow with Open Development Cambodia (ODC) to draft an elections briefing for the July 2013 General Elections as well as to provide legal and policy research for their open data projects involving land use and resource extraction--the primary sources of wealth for the "Khmer rich" and their foreign corporate partners.

While most ASEAN countries-particularly along the Mekong river basin-have had significant issues with land use and resource management, the landscape in Cambodia has been particularly fraught with challenges. By Cambodian law, foreign and domestic companies who have been granted economic land concessions for agribusiness, logging, mining, and other activities must abide by national regulations governing the scope and nature of their operations. Yet in practice, robust regulatory oversight has been extremely limited. Conservation groups as well as transparency and human rights organizations have faced a range of obstacles from the government. Environmental and indigenous rights activists have been harassed, jailed and even murdered.

In such a challenging environment for fostering transparent, rule of law based development, Open Development Cambodia has been able to make a remarkably successful impact. ODC's mission focuses on open data collection, verification, and organization. Since its founding in 2011, ODC--the first project of its kind in Southeast Asia--has compiled and verified any data relevant to Cambodia's economic development. ODC is dedicated to objectively providing open data for free, including students, government ministries, NGOs, investors, environmentalists, activists. In 2014, ODC typically received around 30,000 hits a month, while its Elections Page averaged over 70,000 hits a month throughout the July campaigning period and in the months after the last general election in 2013. The majority of these hits come from within Cambodia, which are quite significant figures for a nation of only 12 million with growing yet still limited internet access.

Success in a Graveyard of Failures

So why was ODC able to succeed in featuring such politically sensitive and potentially problematic projects, such as its land concessions mapping operations and its Elections Page, while so many other organizations have largely encountered obstructionism and even outright opposition?

ODC's open data archives have long provided a much-needed service that even the Cambodian government greatly valued. Various ministries have been utilizing this data in order to perform their own functions as well as to learn about the activities of other ministries. In the labyrinth of Cambodia's various ministries and agencies, ODC has proven itself to be a reliable source of information as well as a platform for data-sharing. Thus rather than viewing the ODC Elections Page as a seditious threat to the existing power structure, the government simply viewed it as just another ODC open data project; as just a continuation of a valuable service that ODC had already been providing.

Furthermore, ODC specifies that it uses data from a universal pool, including government data. To challenge the partiality or accuracy ODC's data would in large part be to question the effectiveness of the government itself. Instead, ODC refrains from advocacy and instead devotes its energies solely on building its data collection archives, leaving users to make their own determinations. By stridently positioning itself as an objective and impartial provider of data rather than engaging in advocacy or journalism, ODC is able to maintain its universal credibility.

Finally, despite continued support from USAID, ODC has always been a Cambodian entity. ODC is mostly managed by Cambodians and almost entirely staffed with Cambodian researchers, mappers, accountants, and other staff. While it originally began as a USAID-funded project of EWMI-PRAJ, ODC is currently an independent NGO and exercises near-complete autonomy from EWMI. By functioning as a Cambodian entity working on Cambodian issues since its inception, ODC has been able to cultivate an organic presence and reputation as a Cambodian institution rather than a "foreign" NGO or as a "subversive" force by the general population and government respectively.
Open Data: Limitless Possibilities

In July 2015, ODC launched its Open Development Mekong initiative covering Laos, Vietnam, Myanmar, and Thailand. Like social media, open data by itself is just a tool. Yet by operating in some of the most authoritarian states featuring some of the most opaque corporate-governance relationships, open data has the potential to empower civil society while simultaneously offering invaluable information to both government and non-government actors.

Open Data has the potential to open minds and transform entire societies as a cutting-edge tool to foster governmental and corporate transparency, accountability, and civic empowerment. ODC's open data model has a proven track record of success even in authoritarian, de-facto single party states. Its potential for empowering and arming civil society with the knowledge to advocate for sustainable and human rights-affirming development is considerable. 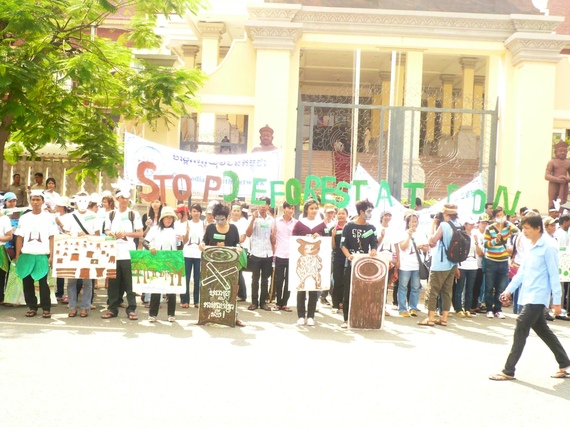