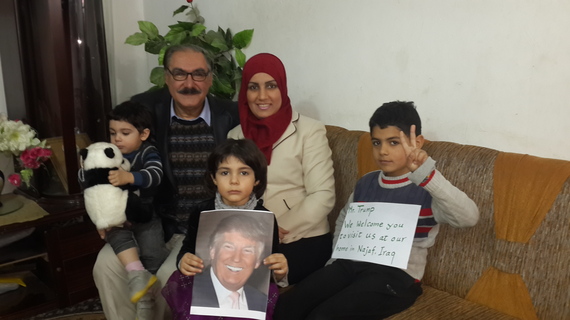 Warm greetings from Iraq. Although I became an American citizen in 2001 and lived for 25 years in Minneapolis, Minn., I returned to my native Iraq in 2003 to work for peace after my adopted country attacked my birth country.

As both an American and an Iraqi, my family and I would like to invite you and your family to visit us in Iraq for as long as you would like. We, and other Iraqi families, would be delighted to have you here as honored guests at our homes.

These guest visits are part of the cultural exchange program for Muslim Peacemaker Teams. They have been ongoing between citizens of Najaf, Iraq, and of Minneapolis since the two officially became "sister cities" in July 2009. The purpose of your visit would be educational in nature- focused on learning about Arab-Islamic culture, including opportunities to visit Iraq's major historical cities, such as Babylon, and its holy cities, such as Najaf, Karbala and Baghdad. You would learn about Hammurabi, who wrote the first code of law, and you would visit the countryside in the South, where an Iraqi woman invented the wheel 3,000 years ago.

Conversely, you would also witness how Iraq has been largely destroyed since 2003 by the ongoing U.S. military presence here. We could show you how ISIS is smuggling oil out of our country and tell you who is laundering it for the funds that support terrorism.

I'm not rich, Mr. Trump, but my family and I are renting a house in Najaf, the holy Shia city where I was born. Our home is small, cozy and full of love. You would stay with us and share what we have. In addition, there are other Iraqi families who would love the opportunity to host you and treat you as family.

In Najaf I assure you that you would find that we (a so-called infidel visiting terrorists) are all brothers and sisters sharing the same bread and the same universe. You would learn how our peoples, including the Jewish, share the Old Testament as the foundation of our respective religions. We have far more values in common than we have differences. We are all "people of the Book." We could even take you to Ur, where Abraham was born, to Jonas' tomb near Mosul, to Daniel's tomb near Babylon, and to the monastery founded by Saint Matthew.

Such a visit from you would counter the negative stereotypes about Muslims and help to discredit those in the United States who promote Islamophobia. We fear most what we do not understand, and the visit we offer would deepen your insights and perceptions about the part of the world we all call home.

In return, should you accept our offer to visit Najaf, my family and I would gladly visit you in New York or Vegas. We would even spend money and have fun - despite the fact that our faith as Muslims bans us from entering the "Sin City." But, for you, we would break the rules. All you need is to purchase your plane ticket, and we will gladly cover the cost of everything else.

I know you're busy with the presidential campaign, so, if you understandably can't make it at the present time, our offer remains open for you to visit us at any time you choose.

But no matter when you would visit, Mr. Trump, I guarantee you this: You would fall in love with Arab-Islamic culture. Aside from superficial cultural differences, our peoples and their desires are very similar. You would feel at home among us.

As a politician and businessman, you know that the resolution of conflict begins and ends with educated and open minds sharing meaningful, productive discussion. Our offer to you is an opportunity to resolve global conflict. Please give it thoughtful consideration.