The Inn's and Outs of Nellie (aka Boobear) and Kaleb when you want him to listen.

FOOD
• Boobear is a messed up eater and has a small appetite (unless it's for chicken, steak, prime rib, eggs, crayons, pens, pencils and markers -- he will eat the odd tampon container -- new not used.
• I usually mix a handful of dry cat food with a handful of dry Caesars and half a can of Caesars wet food in a bowl in the morning and leave it all day (sometimes I change at night) he will RARELY if ever eat food right away in the morning and will NEVER eat if you are watching him or near him -- fucked upness #1. He will however likely eat in the morning if he has starved himself for 24 hours. I worry more about water than food...he will also drink at night (with friends mostly, never alone).
• He prefers to eat when everyone is sleeping.
• He loves to wear heels. 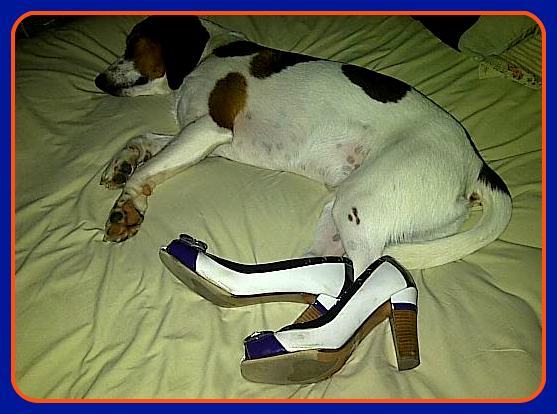 • I keep his food dish and water in my room (I know its gross but he is my baby)...he will eat when starved, it's neat that way.
• I don't keep changing his food as there is nothing wrong with what he has -- I used to but was throwing more away than he ate. He WILL eat at night. Sometimes I will still change it at night but don't worry if you don't want to. I will leave lots of food so I don't care about wasting it.
• I foresee him spending a lot of time in whatever room is peaceful.
• Try not to worry about food, he loves his chicken strips (treats I will send) and I do feed him anything I eat if he wants it...I'm a bad mommy but I don't care.

WALKIES
• Nellie is a very low maintenance exerciser -- he prefers to sleep and/or banging on de drum all day.
• One walk a day and he is happy, there is no specifics here other than HOW you walk him...FUCKED UPNESS #2.
• Nellie (aka Kaleb or Boobear) is nervous, you will not expect it when he decides to bolt, I never do and can't count the times he has gotten away from me for me to run a 3 minute km after him. HOLD THE LEASH RELATIVELY TIGHT or risk running a Boston Marathon course personal best.
• He always walks on his extendable lease; the reason being is he needs to have a minimum of 6ft (so I have learned) distance between him and whomever is coming his way the short leash becomes a real challenge with him (stronger than the little maniac looks -- eyeliner and all).
• Off leash isn't wise -- he runs away too easily and has only been trusting enough of me recently to save him from the evil perils of granny Peabody and her shitshu (or however you spell that).
• Fucked upness #3 Nellie does not understand COME he only understands SIT...which is my fault as I hate training....if you can teach him COME you are my hero but I wouldn't count on it...DONT MAKE THIS YOUR MISSION NOW DOG WHISPERER!!!!!

• 99 percent of Nellie's life is sleeping -- he has to relax his nervous tension so he goes unconscious -- I like his ideals, I practice them but they don't jive with working.
• Boo won't get up and bug you to pee, rarely...he has to be dying to wake you up.
• He will do his last pee around 9:30-10pm then will sleep till usually 7:30 or 8am. He is good that way.
• He likes his blankie as he is a dominating wolf, he also has a bed that is really just a bit of snobbery that he refuses to sleep in. He also has 2 favorite toys (not so favorite that they mean anything it just means he has thrown them around a few times).

• You already know this from all your reading but here is his usual nervous behavior.
• He will find a spot that his back can be up against (corner of the couch or a bed).
• He will pant like crazy, shed and shake, it's his MO.

Ultimately, you will never meet a dog that 3 years after rescue is this scared and unfixable...but he is the best friend I have ever known and I sometimes have anxiety attacks thinking I will lose him. Its a good sign that I should consider dating but sadly I like him better than all humans I have encountered so far.

Rescue a dog as messed up as mine and soon you will think you are doing pretty damn good in comparison. Its the hardest thing I have ever done but by far the most rewarding. Furface love compares to none other.