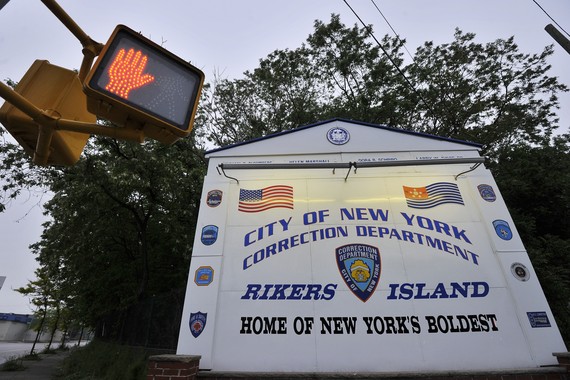 The New York City Board of Correction is currently considering a proposal to lower the minimum standards of care for people incarcerated in city jails in order to create highly restrictive administrative segregation units. Brooklyn Defender Services strongly opposes this proposal, because it would undermine due process rights and punish people in pretrial detention.

At a December 19th hearing, 105 people signed up to testify. All but a small handful -- exclusively Department of Corrections employees or their union representatives -- spoke out against the new punitive restrictions. These speakers included representatives of the U.S. Commission on Civil Rights, psychiatrists, lawyers, academics, religious leaders, local legislators, social workers, mental health professionals, and formerly incarcerated individuals and their family members. All were unequivocal in their condemnation of the DOC's proposal, arguing that administrative segregation is basically another form of solitary confinement that the DOC hopes to install without transparency or accountability. Advocates uniformly agreed: increased levels of punishment and restriction will neither curb violence nor create better conditions for DOC employees or the people who have the misfortune to be in their custody. They urged the Board of Correction to do its part in ending solitary confinement in the city jails, which are quickly becoming a national disgrace.

Conspicuously absent from the hearing was the City's Department of Health and Mental Hygiene. The DOHMH plays a key role at Rikers Island, since roughly half the population has been diagnosed with some type of mental illness. Several people testified that the agency had been explicitly barred from appearing at the hearing, despite the hearing taking place, ironically, at the DOHMH headquarters. That DOHMH would not have an opinion in a process in which they are a primary stakeholder is confounding. Former correctional mental health employees offered especially pointed criticism of the proposal, suggesting that like the MAUIIs and RHUs before them, the DOC's new plan to install "Enhanced Supervision Housing" is simply yet another alternative to solitary confinement that will inevitably result in people with mental and physical impairments facing extreme isolation. If there is discord between DOHMH and DOC, the two agencies responsible for implementation of the proposal, problems are inevitable. Advocates have long charged that DOC employees have refused to protect mental health staff as a method of retribution because they found people to be mentally unfit to be housed in solitary or have tried to stop abuse taking place in the health clinics.

Also absent for the majority of the hearing were many members of the Board itself. Half of the Board, including two members who were appointed just last month, saw a packed room of professionals and advocacy groups and chose to remove themselves from the proceedings one by one. By the end of the day there were only three Board members and the Chair present, and those members who most needed to be educated on the issue did not stick around to hear the majority of the testimony. Some of those same members were heard telling the press that the Corrections officers work hard and deserve support. While this is certainly true, it doesn't build much confidence in the Board's ability to analyze the complicated issues involved in running a jail, particularly given the lack of experience of most Board members in the arena of correctional care. Perhaps it hardly matters what the Board decides, because DOC routinely ignores the minimum standards already in place and the Board has never used its limited authority to enforce these rules. See, for example, the BOC's own study on recreation time and the DOC's new adolescent "Transitional Repair Units," which fail to meet a variety of minimum standards but are nonetheless being upheld by the Commissioner as important reforms.

We are left to wonder if the Mayor's office is aware of the alarming lack of concern shown by the Board about the impact this proposal will have on people currently in jail and those sent there in the future. Was this presented in an accurate way to the administration -- as a solitary confinement unit with even more restrictions and less due process -- or was this wolf in sheep's clothing presented as a way to end solitary confinement? Is this ESH proposal a legitimate attempt at reform or is it part of a political compromise to which our clients are collateral damage?

The conditions to which people in punitive and administrative segregation are exposed to on Rikers Island are truly atrocious. The testimony elicited at the hearing described merciless isolation, intentional avoidance by corrections officials of recreation times, lack of education for teenagers, and possibly worst of all -- not enough food. One person said he lost 40 pounds while in solitary. This is consistent with other accounts of serious deprivations on these units, including extreme temperatures, open sewage and non-existent medical care. With conditions like this ignored by the Corrections Commissioner and continuing despite some limited judicial review, there must be serious concern about any proposal that grants further discretion to worsen conditions and further limit oversight and review. The ESH proposal allows for continued isolation for an unlimited amount of time with no hearing other than before the same insiders who made the decision to put the person there in the first place. This new unit has the most extreme conditions, such as no contact visits with a person's parents or children, all without requiring the committing of any wrongful act in the jail.

One of the critical stumbling blocks to reforms at Rikers Island is a reliance on strategies and ideologies that have been developed for state prisons. Rikers Island is primarily a detention facility for people who have not been able to post bail (a system that itself is under attack). The Independent Budget Office found in 2012 that 76 percent of the people held at Rikers Island are there awaiting trial. By definition, they are innocent until proven guilty. The U.S. Supreme Court, in Coffin v. United States, explained that "the principle that there is a presumption of innocence in favor of the accused is the undoubted law, axiomatic and elementary, and its enforcement lies at the foundation of the administration of our current law." Yet the testimony of city officials and the corrections union president make it abundantly clear that they view everyone at Rikers as a criminal -- their use of terms like "offender" underscores this point. Correctional Officers Benevolent Association leader Norman Seabrook frequently refers to Rikers Island as a "dumping ground" and described those under his care as rapists, murderers and animals. It is unlikely that he or any of the other guards on Rikers Island would treat any animal the way they do people in solitary. The fact that they are fighting to reduce the minimum standards to eliminate further the scarce privileges and rights people have shown just how degrading they want the jail experience to be for everyone -- even the innocent, the young, the mentally ill -- maybe even especially those because they suffer the most. As Corrections officials testified yesterday, the "us-against-them" mentality was apparent as was the contempt they hold for people who the City entrusts to their care.

It is just simply not true that Rikers Island is populated primarily by violent, dangerous individuals -- the Mayor himself acknowledged this last week when he said that many people in DOC custody do not "need to be there." In 2013 there were more than 81,000 admissions to Department of Correction custody, a shockingly high number considering the historically low violent crime rates the City is consistently trumpeting. For example, there were just 335 murders in 2013; when including indictments for rape, robbery and felony assault there are few thousand more. Clearly less than half of the total admissions to Rikers were for serious felonies and possibly closer to a third. This means that at least half the admissions to DOC are for crimes that are relatively minor. Bail was set in 22,770 non-felony cases in 2013. In all but 12 percent of those cases, people spent time in DOC custody; nearly half of people with bail of $500 remain in custody until the disposition of their case. Thousands more cases start as felonies and are reduced to misdemeanors, yet those people often stay in jail. Interestingly, when considering the treatment of people in custody for minor matters, nearly 40 percent of people in DOC custody having been diagnosed with a mental illness -- yet just 3 or 4 percent of violent crime is committed by someone with a mental illness.

Both the ESH and the TRU are in violation of current Board of Correction rules governing the minimum standards for care. Why would the Board of Correction rewrite local rules to define even lower standards at a time with the U.S. Department of Justice has made it clear that reforms at Rikers have not taken place? Not only will this new unit be morally reprehensible, but it will likely cost the City millions of dollars when advocacy groups file a class action lawsuit.

Brooklyn Defender Services has represented hundreds of thousands of individuals incarcerated on Rikers Island over the years. In our experience, the conditions have gotten significantly worse over the past several years. Our clients are subjected to violence and neglect on a scale that is unmatched in my thirty years of experience in the court system. I implore elected officials to look at this issue in greater detail, to examine the issue in a manner that reflects the gravity of the situation for so many members of our community. The City should welcome the assistance of experts in the field who, rather than looking for flashy "quick-fixes" that are unproven and likely to result in more abuse, will conscientiously and humanely seek to revisit every aspect of the problem at Rikers -- from the unwarranted overuse of bail to best practices for every person confined to the Island -- especially those with mental illnesses, the young and the infirm.