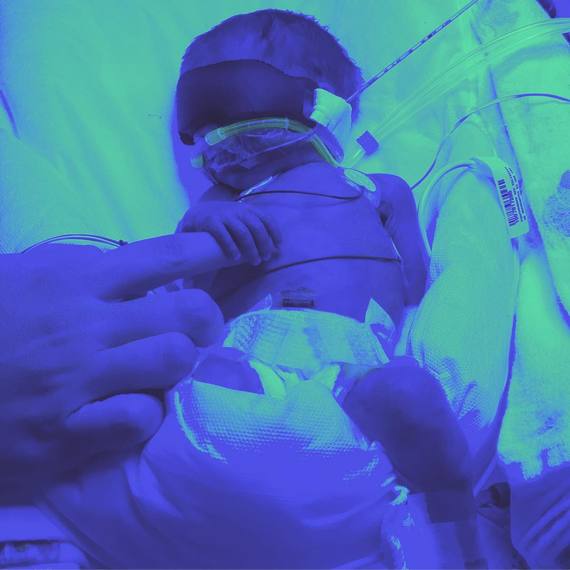 Having a child in the NICU, it's common to surround yourself with other women facing a similar challenge. Subsequently, over the past couple of months, I've scoured the internet and pored over countless websites, groups, and message boards in search of answers and validation. What I found, more often than not, were women processing their emotions and inquiring as to whether or not they were "normal," at a time when their husbands were making them feel as though they were not. Turns out, men and women (on average) tend to process these kind of events very differently. And honestly, who does that surprise? Men, by and large, are hardwired to "fix," whereas, stereotypically, women are hardwired to "feel." Where a man sees an improving situation at the hospital, a woman may simply see a situation.

Take my husband and I, for instance. He looks at my daughter's chart and sees "growing preemie" next to "diagnosis" and comes away satisfied that there are no other diagnoses of concern. I look at it and cringe inside. In his eyes, we're fixing the problem. Our daughter is in the best hands possible and her status continues to improve day-to-day (albeit with the occasional minor setback). Me? While I can acknowledge that these things are true, I'm biologically programmed to view things differently; for my child is still at risk, and she is not at home with me. And that's where my husband and I differ. I had previously thought that I might be alone in this, until I read the aforementioned message boards and found woman after woman struggling to find a way to explain to their husbands why they were still suffering emotionally, even though their situations at the hospital were seemingly getting better, not worse. So I figured I'd take a stab at trying to explain our emotional turmoil.

It starts with pregnancy. While you stood by our side, indulging in our cravings and marveling at each ultrasound, just as we did, our experiences during this time were quite different. You couldn't feel the kick to the ribs in the middle of the night. That same kick that woke us up and drove us crazy also let us know that a true miracle was happening within, and for that reason, we cherished every annoying punch or jab; punches or jabs that we were supposed to feel for another few months, but won't, because our pregnancies were cut short. In that way, we're not only mourning the current situation, but the situation that was lost as well. While pregnancy can most certainly be a challenge, it culminates in the most gratifying of rewards. We fight through the nausea and the sciatic pain, so that we can get our miracle in the end. It's a cost-benefit analysis that greatly favors the sacrifice. So while you were enjoying your nightly beer, we were trying to surreptitiously wipe the puddle of drool off the floor when you weren't looking. Ditto for sushi. So when the reward that awaits us is a hospitalized child that we're often not allowed to so much as hold, we feel robbed. We put in the work, but didn't get the promotion. It can feel astoundingly unfair.

Beyond that, years of biology and conditioning have caused us to react in markedly different ways to our children's needs. As far as fathers go, I tend to think of my husband as being in the top one percent of one percent -- and unlike Urban Meyer, that phrase actually means something to me. And yet, when he and I are taking a nap, and the nanny is playing with our daughter in the other room, he merely stirs and quickly returns to sleep when he hears our daughter's piercing scream. Me? Despite being just a few days removed from surgery and unable to walk in a normal fashion, adrenaline has me literally jumping out of bed, catching air that would make Jordan proud and sprinting to my child's side -- my internal organs falling out along the way. And therein lies the difference. That's not to say that my husband doesn't care about my daughter's needs and meet them when necessary; he's an amazing father. But I'm biologically programmed to meet them in ways that he often physically cannot, and the resulting attachment can manifest itself in a number of different ways.

Ultimately, we are masters of our own domain, but not the universe. We cannot change the situation before us, and so it seems rational and logical to relinquish control and focus on the positives. But nothing about having your child in the NICU is rational or logical. Truth be told, I hate going to see my daughter. Sure, I love the one hour of skin-to-skin time that I'm afforded, but the desats and heart rate decelerations are so unnerving that it can turn a pleasant visit sour in a matter of seconds. The alarm that sounds when a child is in some sort of distress sends chills down my spine and reverberates through my brain, initiating the fight or flight response that is so common in the face of a threat. But I can neither fight nor flee, for fleeing would mean leaving my child, and fighting? Well, as we established, I am no position to fight. There's nothing that I can do. And that feeling of helplessness is most damaging of all.

So yes, our children may be in the best hands. And yes, they are improving. But until they are in OUR hands, we will continue to suffer emotionally. It's just the way nature intended. So while I know it's disconcerting to see your wife in distress, just remember that it's only because she's a good mother that she feels this way, and that this too shall pass.