Petty's Island is a tiny island situated in the middle of the Delaware River between Philadelphia and Camden. In 1850, Ralston Laird emigrated from Donegal to Philadelphia. Shortly after his arrival, he set off for Petty's Island, where he married, had ten children, and declared himself King. The generous king helped several struggling immigrant families to also establish themselves on the island. Over fifty years later, the island was eyed for industrial development. The elderly King was the last to remain when a mysterious fire finally drove him from Petty's Island.

Today, the island is a fuel storage facility owned by the Venezuelan oil company.

In April of 2009, Venezuelan President Hugo Chavez offered to donate the island to the state of New Jersey for wildlife conservation. Details regarding the toxic waste cleanup are still being resolved between the two governments and the island remains off-limits to the public.

Using the historical society and the Internet, I tracked down and contacted all of the surviving descendants of the king, reestablished their royal status and minted a set of commemorative plates bearing their royal images. Artifacts from the site of the king's former palace were also uncovered over the course of several unauthorized visits I made to the island.

Coincidentally, a group who identify themselves as the LKLA also permeated the island and painted a large-scale monument to Ralston Laird--the rightful King of Petty's Island--atop one of CITGO's remaining gas storage drums. It can only be viewed from satellite or aircraft, and from that vantage point, interestingly, bears a striking similarity to the Laird Family Royal commemorative plates.

I decided it is only fair that Chavez be alerted that this once mighty kingdom is re-staking a claim on his land. 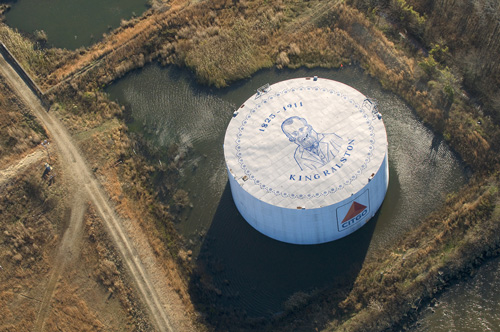 This letter is concerning Petty's Island, which you are currently in the process of turning ownership from the Citgo Corporation over to the state of New Jersey.

My name is Duke Riley. I am acting as a liaison for the Laird Kingdom Liberation Army (LKLA).

The LKLA wishes to inform you that prior to Citgo's purchase of Petty's Island it was illegally seized from its proper owners by conspiring efforts of arson and fraud by the Crew Levick Oil Company, the Pennsylvania Railroad Company and the U.S. government.

The Laird Kingdom was established in 1855 by King Ralston Laird. The island was a territory legally acquired by the Laird Kingdom by way of both Pennsylvania and New Jersey adverse possession law. Over the next 50 years, the Kingdom invited struggling immigrants to the island and helped them to prosper.

As of November 24th, 2009, the LKLA has re-occupied a portion of Petty's Island. The Laird Kingdom is a peaceful kingdom; they seek no compensation for their losses, nor do they wish any harm to you, the people of Venezuela, the Citgo Oil Company, or its constituents on the island. The LKLA shares your concern for the environment and fully supports your decision to turn the island into a nature reserve and education center.

As a leader, you are outspoken in your defense of smaller nations and your disdain for global hegemony. The LKLA hopes that your actions will remain true to your words by acknowledging the Laird Kingdom.

The LKLA has three small demands:

1) Public or written acknowledgement of the Laird Kingdom. The former principality and surviving descendants of the Laird royal family must receive the long overdue recognition within the international community.

2) A permanent public monument of Ralston Laird must be included in the historical redevelopment plans for the island. Special programming for the hearing impaired must also be incorporated, in memory of the four Laird princesses who were born deaf.

3) Governor Corzine's refusal to attend the ceremonial transfer of the island was an insult to The LKLA. They ask that the offer be retracted and that the nature reserve be placed under the care of the City of Philadelphia. The island originally belonged to Philadelphia and it is where the majority of the exiled Lairds are buried.

Given the sensitive nature of this subject, if need be, I can arrange travel to Venezuela and discuss this matter in person.

on behalf of the Laird Kingdom Liberation Army