I was reminded of this discriminatory and illogical policy after a recent conversation about student advocacy on Twitter. In 2005, at the end of my junior year of high school, several friends and I mounted a campaign to change this rule. I wrote letters to and corresponded with members of the Red Cross and independent blood centers. Many of the people I spoke with expressed agreement that the policy was misguided. The medical director at the Red Cross' Penn-Jersey Region branch, for example, wrote to me on Oct. 3, 2005, that "the American Red Cross believes it is time for the FDA to reevaluate the issue." I reached out to the FDA, which sets the policy, and spoke with the consumer-safety officer in their Center for Biologics Evaluation and Research. After he told me the decision lay with the FDA's Blood Products Advisory Committee (BPAC), I followed up by drafting a letter to each of the committee's members.

By that time, I had begun working for Equality Forum, a Philadelphia-based LGBT nonprofit. I turned the blood drive policy campaign over to my new employer and, for the next two summers, worked primarily on the Fortune 500 Non-Discrimination Project and LGBT History Month. The BPAC never responded to our letter, and the FDA continues to bar gay men from blood donation despite opposition from the American Osteopathic Association and the American Medical Association.

A U.S. Department of Health and Human Services panel recently recommended replacing the lifetime ban with a one-year ban, but this change would only be a marginal improvement; the ban should be lifted altogether. Since the FDA is meeting to discuss the issue on Dec. 2, I am posting an updated, condensed version of my original letter below.

I wrote to each member of the Blood Products Advisory Committee nine years ago on behalf of dozens of students from Moorestown Friends School and the New Jersey Governor's School of International Studies. We hoped you would reconsider the FDA's policy barring "men who have had sex with other men (MSM), at any time since 1977" from donating blood. I remain concerned about this issue and am following up with this "open letter" to continue the conversation. The FDA's policy still unnecessarily stigmatizes gay men and fails to most effectively "assure the safety" of individuals who receive donated blood.

The FDA claims this policy is warranted because gay men "are the population most severely affected by HIV. In 2010, MSM accounted for at least 61% of all new HIV infections in the U.S. and an estimated 77% of diagnosed HIV infections among males were attributed to male-to-male sexual contact." While these numbers might sound impressive after a cursory review, they do not justify the policy.

First, homosexual males -- men who have had sex with other men -- are the only people the FDA bans from donation on the basis of an identity characteristic. While the FDA's website implies otherwise, profiling on such a basis is discriminatory by definition. Listing statistics about the incidence of HIV in the gay population is eerily similar to overtly racist arguments in favor of racial profiling. The policy is (arguably) wrong regardless of its impact on the blood supply.

Second, the policy does not accurately identify the behaviors that put one at risk for HIV. As shown below, the Centers for Disease Control and Prevention (CDC) periodically publishes the "Estimated Per-Act Probability of Acquiring HIV from an Infected Source" (these estimates do not factor in the effects of condom usage): 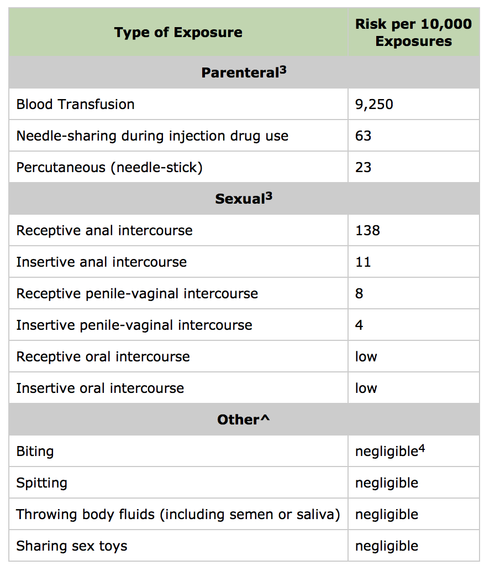 According to the CDC's probabilities, Tom is least likely to contract HIV and taint the blood supply. Yet Tom is the only person the FDA bars from blood donation.

The following revisions to the FDA's policy would be more likely to "assure the safety" of donated blood:

A policy that incorrectly identifies high-risk groups instead of high-risk behaviors is neither effective nor just. I hope you will end the FDA's institutionalized discrimination at your Dec. 2 meeting and look forward to hearing your response.

A version of this post first appeared on 34justice.