In May of 2001, Youthradio.org was especially honored to receive a Peabody Award that was presented by Walter Cronkite.

Walter Cronkite and his colleagues are rightly credited with giving daily reporting and journalism its place on television. Edward R. Murrow preceded him, with muckraking TV specials. Like so many other TV journalists of their times, both started reporting while in radio, well before TV was available to the public.

No doubt we have Walter Cronkite to thank for establishing the gold standard of TV news. Without his commitment to use TV as another medium for journalism, the networks might have devolved more quickly to the unsubstantiated banter that passes for news on many stations today. 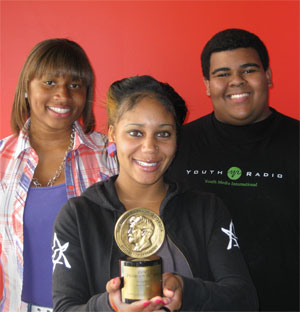 It's worth recalling that when Cronkite and his colleagues started doing daily news on TV, the medium was new and wide open to discovery. A lot of early TV consisted of radio shows or vaudeville acts that were simply moved to television without exploring the medium further (sound familiar in the web 2.0 era?). As a child, I was a regular fan of a show that was simply the entertainer sitting at a card table talking to the "kids at home" and that was it.

For his part, Cronkite brought the best of his radio experience to television -- a commitment to reporting and the principles of fairness and accuracy in journalism. He and his colleagues on the production side pushed the medium to include remote, from-the-scene television reporting, quick turn around news coverage and all kinds of innovation that today seems standard.

Like so many other baby boomers I grew up with Walter Cronkite on TV in my family's living room delivering the news of the day. I was 10 years old when he announced that President Kennedy was dead, and like everyone says, that was when we knew it was true. And once Cronkite spoke out against the War in Vietnam five years later, my grandfather, a World War I veteran, started listening to my arguments against it.

With The Evening News, the American public could hear what they believed to be Cronkite's fair and accurate reporting -- and they could see what was happening with their own eyes... "the news as it happens." Similar to the capacity of digital technology today, television news became a huge amplifier of the great social movements of the time. The public watched as police turned their dogs and water hoses on black civil rights activists in the south; a Buddhist monk set himself on fire to protest the War in Vietnam; and Chicago police beat young protesters and reporters in the streets outside of the Democratic National Convention.

What is less apparent is how Cronkite and his colleagues at CBS and NBC preserved the space for journalism inside the corporate structures that controlled TV news. George Clooney's Good Night and Good Luck gave us a window into Murrow's dogged insistence on journalistic integrity. Likewise, there were many times that Cronkite had to fight to keep daily reporting, the craft and profession he loved throughout his career, as a mainstay of TV News.

Walter Cronkite's death comes at a time when we are told journalism is dying. The profession's current challenges are complex, including the lack of a resilient business model. Cronkite and his colleagues grappled with similar challenges regarding journalistic pursuits and its presentation on television, when television was a new medium. It is incumbent upon today's journalists, especially the diverse/younger generations, to take hold of the baton passed from Cronkite and re-establish the gold standard and apply it to digital journalism. At the point of a quantum leap in technology there is always a temptation to allow the new media it produces to be a sufficient end in and of itself. Better yet? As we embrace Twitter and the blog, we must also be committed to forging a new pathway to the truth and the hard work of uncovering the information necessary to sustain a healthy democracy.

Today's young journalists, like those who fill the classes at Youth Radio, have the opportunity to strengthen journalism's gold standard by expanding it far beyond the limited technology and lack of diversity in Cronkite's newsroom.