A year ago, I wrote an open letter on this site ahead of the Presbyterian Church-USA--PC (USA)-- General Assembly in support of a proposed resolution to divest from companies that profit from Israel's occupation of Palestinian lands, and to boycott products that are made in the illegal Israeli settlements. Today, I am appealing to the United Church of Christ (UCC) to adopt similar resolutions. In doing so, I was echoing the 2009 call by leaders of most Christian denominations in Palestine for international solidarity in their non-violent struggle for freedom. The Christian Palestine Kairos document calls on the international community

... to engage in divestment and in an economic and commercial boycott of everything produced by the [Israeli] occupation...These advocacy campaigns must be carried out with courage,... proclaiming that their object is not revenge but rather to put an end to the existing evil....Through our love, we will overcome injustices and establish foundations for a new society both for us and for our opponents. Our future and their future are one. Either the cycle of violence [will] destroy both of us or peace will benefit [us] both.

The PC (USA) did adopt a divestment and boycott resolution last year. It is noteworthy that Jewish Voice for Peace (JVP) played a very prominent role in urging the PC (USA) to pass the resolution. JVP and a growing number of progressive Jewish advocates see divestment and boycotts as an alternative to the cycle of violence and a call to Israel to live up to the highest Jewish standards. The call for justice and equality certainly does not mean the domination of one group of people over another, whether in a one bi-national state or two states living side-by-side. In fact, the UCC resolution takes no position on one form of resolving the conflict over the other.

The Palestinian struggle, like most other freedom movement, has had both a violent and a vibrant non-violent side. While the media has mostly focused on the violence, labor and student unions, women's groups, and village committees have always played a prominent role in the struggle. However, civil society leaders have always had to contend with Israeli repression. For example, Mubarak Awad, a Palestinian leader who waged a Gandhian non-violent struggle in the 1970s, was imprisoned and deported by the Israelis. In fact, while we often hear voices in the western media criticizing the Palestinians for lacking leaders like Gandhi and Martin Luther King Jr., many of the same voices are now vehemently criticizing the growing non-violent movement of the Palestinians as a threat to the existence of Israel.

The UCC and other U.S.-based churches have a presence among the Palestinians. Many in your church are aware of the terrible conditions of the Palestinians. For example, The UCC, through the work of its Global Ministries, partners with the Episcopal Church in running one of Gaza's most important health institutions, al-Ahli Hospital. Here is a quotation from a post on Facebook by a UCC group regarding the conditions of this hospital during Israel's last savage attack on Gaza:

Holding Al Ahli Hospital Gaza, patients and staff in prayer. .... Al-Ahli receives an average 55 burn cases per day as a result of the war; of which 50% are children.

Some Israeli soldiers have since spoken out about the atrocities committed in Gaza. Note for example, the mention of the Caterpillar D9 bulldozer in the account of one of these soldiers about the actions of his unit in Gaza. (Caterpillar is one of the companies named in the proposed resolution as a target for UCC divestment.)

We fired ridiculous amounts of fire. ...We had Spike missiles... and there were three tanks with us at all times -- and another two D9s (armored bulldozers). I don't know how they pulled it off, the D9 operators didn't rest for a second. Nonstop, as if they were playing in a sandbox. driving back and forth, back and forth, razing another house, another street. And at some point there was no trace left of that street. 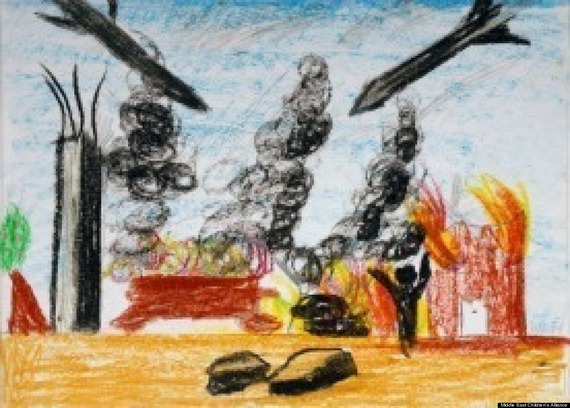 A child's view from Gaza

My message, as a Palestinian Christian, is a simple one: Please stand for justice and do not profit from those who cause severe harm to my people. Please stand with a growing international movement-- even among progressive Jews-- that is telling Israeli leaders that they are effectively driving drunk, endangering not only the Palestinians but their own people, as well as prospects for peace in one of the most sensitive regions of the world.

As Bishop Desmond Tutu has said in his letter endorsing the proposed UCC resolution:

It is unconscionable to remain silent, or neutral, in the face of injustice. Neutrality maintains the status quo and compounds the injustice.... Your resolution places you on the side of justice and human rights for all. I endorse fully your resolution's proposal to use the powerful non-violent tools of
economic leverage.

(You can view the full text of Bishop Tutu's endorsement of the resolution here.)